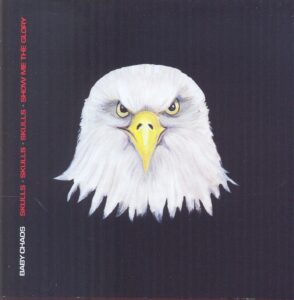 Scottish rock outfit Baby Chaos left something of a cult legacy during their unreasonably long hiatus. Their first two albums, 1995’s ‘Safe Sex, Designer Drugs, and the Death of Rock ‘n’ Roll’ and 1997’s ‘Love Your Self Abuse’ demonstrated the band’s immense flair for creating well-crafted no-nonsense britrock with strong sing-along choruses and rich, carefully constructed vocal harmonies. It was no wonder that they found a fan and friend in Ginger Wildheart, who has spent his career creating music that shares those values, and who has championed Baby Chaos since their early days.

In the seventeen years that have passed since the band were mothballed, their name would occasionally get referenced in pub conversations about British rock bands who showed real promise. Those first two albums became hidden treasures in later years, and those who were lucky enough to track them down would inevitably then lament the fact that there would be no new music from Baby Chaos to follow them.

Well good things come to those who wait. In 2015, Baby Chaos have returned with their third album ‘Skulls, Skulls, Skulls, Show Me The Glory’, and it’s an absolutely glorious listening experience. True enough, they’ve taken their sweet time about it, and even Ian Brown and Axl Rose would agree that 18 years between albums is pushing it slightly, but by the time the drums and vocals kick in on the aptly titled opener ‘You Can’t Shut Us Up’, all is forgiven and forgotten.

Those familiar with the band’s previous output will have a fair idea of what to expect on SSSSMTG, they’ve not reassessed their musical direction and ventured into free jazz or minimalist ambient choral arrangements. Instead, Baby Chaos stick to what they’re good at here – straight up rock, vocals high in the mix, melodies guiding the songs, and it’s a winning formula. If there is any difference between this album and previous efforts, it’s that there is some evidence of added depth in the compositions. These songs have been considered, improved and worked on, but have not lost their energy in the process.

One of the album’s biggest attributes is its production. Take promo single ‘The Whispering of Giants’. It sounds absolutely huge thanks to the perfectly captured guitar lines and gigantic drum sound. Speaking of drums, the sound is phenomenal throughout the album, and listening to SSSSMTG on a good pair of headphones or a decent amp will provide a rewarding payoff.

SSSSMTG delivers a relatively consistent listen throughout. Yes, the tempo changes somewhat between the hard rock workouts and the more introspective numbers, but this is an album led by heavy guitars and rich melodies. It’s the approach The Wildhearts forged an entire career out of, and its easy to see why Ginger is such a fan of the band.

For the same reason, the only criticism that could be aimed at SSSSMTG is that it might be considered not very ‘current’. There isn’t much of a space for this sound these days, with many rock bands opting to focus on riffs accompanied by a much more aggressive vocal, or going the other way, and employing radio-friendly vocals and omitting the guitar solos in pursuit of a wider audience. That said, whether Baby Chaos have captured a zeitgeist or not is entirely subjective, and matters even less, especially when the tunes are this good.

The album’s final quartet of songs are as strong as you’ll find on any album this year – ‘Out of the Silence’ is a beautifully spacious and uplifting sing-a-long hymn, ‘Risk and Writing’ has an irresistible urgency washed through with some harmonic guitar work reminiscent of vintage Thin Lizzy and blisteringly sardonic vocals, ‘A Tingling On Your Bright Skin’ is introduced with a dream-like ethereal first few bars before its business as usual and the guitars and vocals guide us through a vintage rock work out, and to finish things off, SSSSMTG closes out with ‘Habibi’, the album’s opus, it sounds delightfully evil, and the chorus is worth the price of the album on its own.

Ultimately, what make SSSSMTG such a refreshing album is the attention to detail and the care that’s been taken in putting together such a strong set of songs. Of course, you could argue that given Baby Chaos have had seventeen years to make it, the songs bloody well should be good, and you’d have a point. But too many bands produce comeback albums that fall well below our expectations – in fact, that’s usually the case. In all fairness, Baby Chaos have not had the weight of expectation burdened upon them to any great extent – the number of people eagerly awaiting this album will have been small given their fanbase not being huge to start with and many of those people had probably given up on hearing anything new from the band. This will also present a marketing challenge to Baby Chaos, who will need a new generation of fans to champion the album if it is to enjoy any substantial widespread success.

But that’s a different problem for a different day. For now, Baby Chaos can take comfort in the fact that they’ve created their best work to date. SSSSMTG is the sound of a band who have worked hard to create a strong rock album, and it’s an absolute triumph.