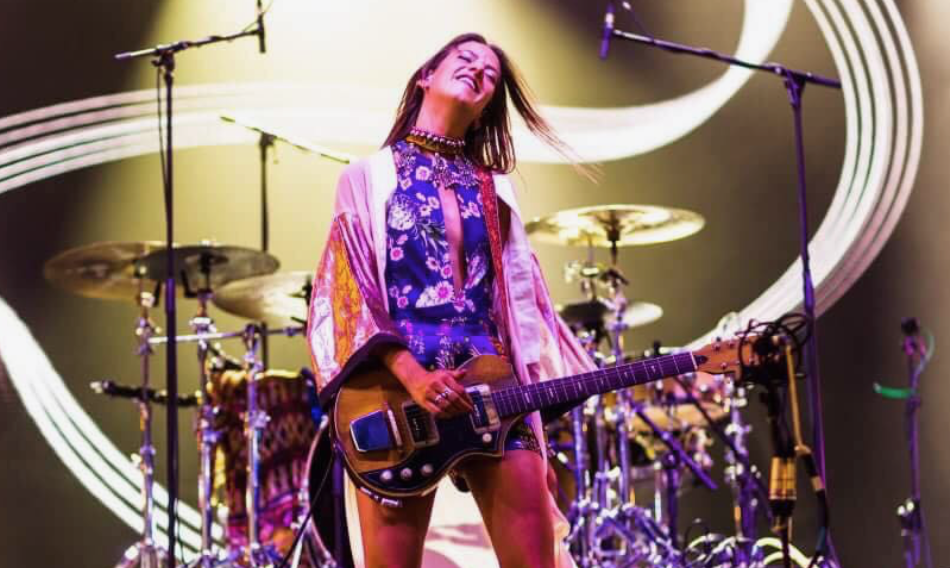 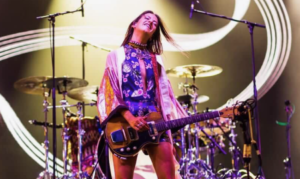 Dutch band My Baby have been making a fuss on the European festival circuit in the past year. It’s easy to see why with their mixture of colourful neo hippie garb which makes them they look like renegades from the Jimi Hendrix Experience from circa 1969 with their Biba scarves and age of Aquarius dayglo. They match this with a colourful mix of sound from driving clipped blues guitar grooves, to afro beat shuffles, tripped out neo funk patterns to powerful death disco drums that brings them right up to date.

This is not a time machine music and like, perhaps, Goat, the band have dealt with certain aspects of the past to create a new future of their own. Their singer Cato van Dyck Deals her vocals over the pounding backbeat of the busy drummer who nails the kick drum down on a constant four to the floor that is guaranteed to create a hypnotic groove that the audience quickly latch onto as the band pull off the trickiest of tasks and turn a just arrived festival main stage audience into a genuine swaying and grooving lovefest.

The songs have the tripped out hypnosis to them as the band somehow deal with the groove for the groin and the esoteric for the mind. There is a real trip here. A real journey and armed with slithering melodies and a soul searching beauty the band make you think, feel, dance and float in a way that so few bands can.

There is something magical and very special about My Baby. They are the perfect festival band. A combination of decades of great festival music into a modern and thrilling whole. It’s no wonder that the European festival circuit has fallen in love with them and post Brexit Blighty is about to do the same.

Image above by Mirel Masic whose website is: https://hallometmirel.nl/