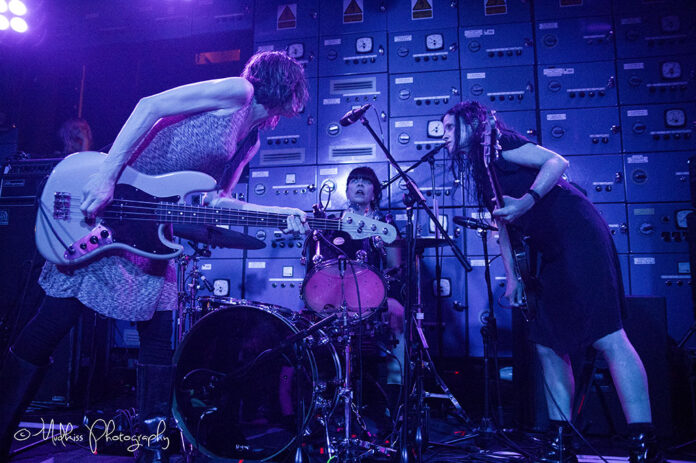 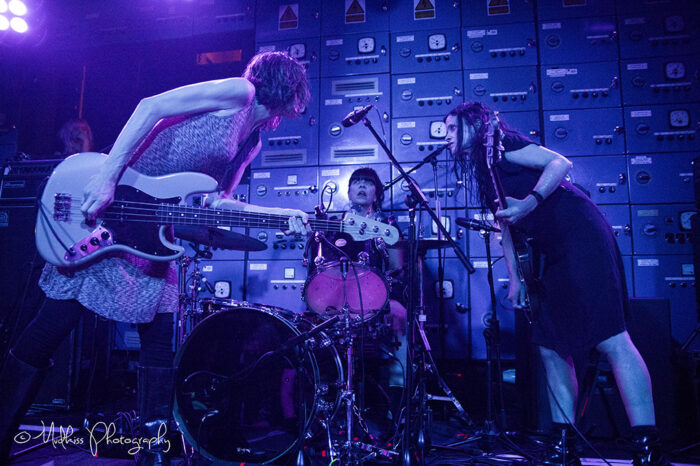 Louder Than War’s photographer Melanie Smith got down in the heaving mosh pit, whilst Clive K Hammond looked down on the carnage from the balcony. We report back in words and photos on American trio Babes In Toyland live from Manchester’s hipster hideout Gorilla.

By all accounts it’s going to be a struggle better expressing Ged’s experience of American act Babes In Toyland’s (BIT) first show over on our boarders for years. Unlike most frustrated British bands, BIT have as much repressed energy in 2015 as a 1993 pill head. A BIT episode is like an epidemic; the furious punk ethos that defines them, the apathetic consequences of their music, the closeted hooks – the Minneapolis outfit remain as defiant now as when they first were born in 1987 and just as infectious. What was the difference between Southampton and Manchester? 0. 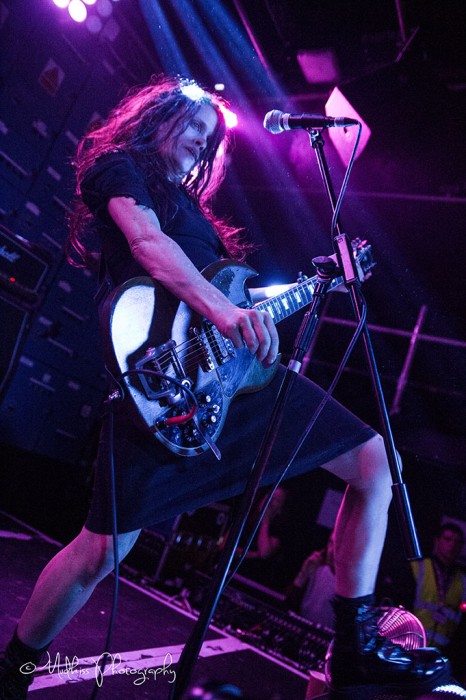 Bar their hiatus – the 13 years between ’01 and ’14 would normally severe most ties between artist and listener, this troop however remain an absolute contradiction to this order – BIT have retained the shoe-gaze persona that their live image suggests. Yet they remain furious within their complexion. The bitterness of ‘Swamp Pussy’ an obvious allure; even most hardened late 70s mutineers would struggle to decipher the complexities. ‘Bruise Violet’ furious. Even ‘Ripe’ surrounded itself within the distortion soaked imagery of a Screaming Females riding Bratmobile.

Their mouthpiece – Kat Bjelland – continues to influence the likes of PJ Harvey crossed with a less stubborn Dorian Cox. Her vocals sail through the tracks ‘Blue Bell’ – an anarchic trip through the industrial aged music of the mid 80s, the hardened guitars conjure a palette of warped guitars that align themselves with any vexed punk group – and ‘Oh Yeah’ – seamlessly a blueprint BIT song as her voice enrages throughout the twisted chorus and vicious verses. There’s less fury; but the spirit evoked by the suppressed trio remains explicitly dark.

BIT should be regarded as visionaries of the punk renaissance of the 90s. They brought to the world an aggression that is rarely bettered. Thankfully the world is just as mistreated now as it was back then. Welcome back.

You can keep posted with what Babes In Toyland are up to by finding them on their Facebook and on Twitter (@babesintoyland).