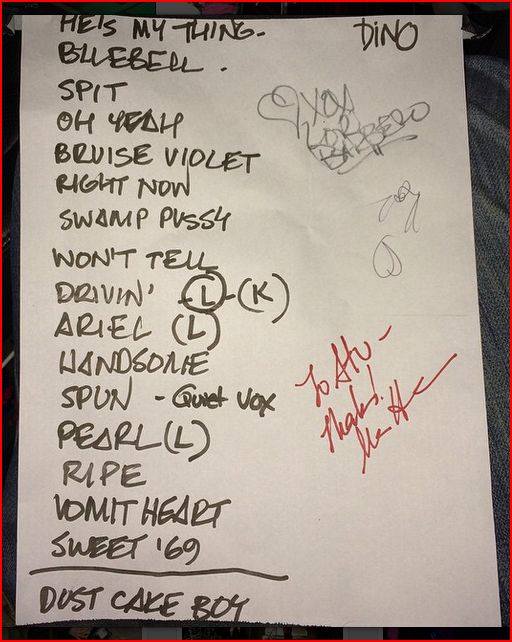 Ged Babey’s in heaven watching Babes in Toyland – so much so he’s dubbed it his ‘Gig of the Year’.

You are getting absolutely no objectivity from me today. This was a great gig. Best of the year, any year. Babes In Toyland were phenomenal. Arguably better than twenty years back or at least showing no signs at all of age as far as the music, performance and sheer intensity was concerned.

The weirdest thing was how those demonic, malevolent songs about liars and motherfuckers and soulstealers can actually seem so joyful and uplifting when they’re played live. Kat still rolls her eyes and looks like an insane woman with murder on her mind, but offstage she’s laid back and all-smiles, happy to chat with fans in the smoking enclosure, sign shit and pose for photos.

Lori Barbero is the most amazing drummer regardless of gender and Maureen Herman is just cooler than a polar bear in your icebox.

My friend Richard remarked on his Facebook after the gig that it was “the coolest, best-looking crowd” he had seen locally and how. “Seeing Babes in Toyland’s feminine mosh pit reminded me how music looked to be progressing before Spice Girls and Oasis pissed in the pot.” I know exactly what he means.  Having an audience which was nearer to a 50 / 50 gender split does make for a far cooler gig somehow. More dancing, more attentiveness to the music and less testosterone in the air I guess.

The very special support act, Oklahoma Riot Grrrl teens Skating Polly were a huge bonus too. Two step-sisters aged 15 and 18, who must be the offspring of a Riot Mom and Riot Pop, swap instruments, drums and bass and bash out an amazing racket of Bratmobile style pop.  Songs about perceptions of beauty (Ugly) and “correctional juvey” with an unapologetically sloppy & screechy attitude and joie de vivre. Two piece bands seem to be the thing nowadays and the fact the blonde in Skating Polly looks a bit like Kurt Cobain, had he been a born a girl, means that we’ll be seeing a lot of this band over the next few years I imagine.

It was Babes In Toylands night though. They were so good it was beyond belief and the set just flew by, from He’s My Thing to Dustcake Boy all of the fan favourites were present and correct. The now infamously loud PA at the Engine Rooms was absolutely spot-on this time and the acoustics of the place are its main attraction as a venue.

If you google ‘Greatest Rock Bands of the Nineties’ you get the same old names appearing on list after list, but criminally you rarely see Babes In Toyland mentioned. They probably don’t give a fuck about R ‘n’ R Halls of Fame and rightly so, but they were and now, I’m glad to say, still are, one of the greatest, fiercest, most life-affirming rock bands I’ve ever seen.