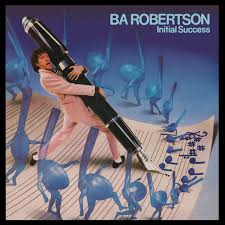 B.A. Robertson! Staggering as it may be looking back from this distance, but for a year from the summer of 1979 he was unbelievably one of the UK’s most prominent Pop stars, with four big hit singles and a Top 40 LP (this one here). I can remember first seeing him on one of those Saturday morning kids shows (I forget precisely what one), he was messing about with one of those triangular paper things that went “bang” when you wafted it in the wind. This was to tie in with the name of his single of the time of course, Bang Bang. He seemed full of mock-abrasive bluster and playing up to the tough Scot archetype. Even at my young age I could see any “New Wave attitude” he was trying seemed a bit of a put-on. He looked more like a shirty Magpie presenter than a rocker.

Though Bang Bang was his first hit Robertson had been plugging away for six years beforehand and felt very much the industry insider with seemingly easy access to recording contracts, studios and television. I mean, who gets to record an album for a label like Ardent at the age of 17 and another for Arista a few years later (before finally arriving at Asylum)? Maybe it was just down to luck? To be fair though he had a talent for penning a decent tune and the occasional neat turn of phrase.

Bang Bang was sort of seen to be aligned to the New Wave by dint of the Ian Dury-like spoken vocal (Robertson insists he was doing an impersonation of top notch session bass player Herbie Flowers instead, hmmmm). But listening to it today it’s as much a 70s novelty record as something like Sailor’s Glass Of Champagne or The Lone Ranger by Quantum Jump, not that there’s anything necessarily wrong with that. Though a melodic enough number, it has some queasy insider-speak too (John Fruin, who virtually no-one outside of the offices of B.A.’s record company would have heard of, is namechecked in the lyrics. He was Managing Director of WEA, Asylum’s parent company) and an illusion to Sherlock Holmes’ drug habit, but it is on the whole a fairly standard catchy piece of 70s MOR Pop and went onto to almost top the charts.

This set Robertson on a run of hits, each one with its own in-built gimmick. Knocked It Off had a vague football theme, Kool In The Kaftan was a critique of Hippies and fads with To Be Or Not To Be plundering Shakespeare for inspiration. They were all tuneful but disposable pieces of Pop music (hardly Post-Punk though as unwisely alluded to in the sleeve-notes), but undoubtedly adeptly produced and attractive to the younger pop-pickers (and David Hepworth). Though it is I will confess a risible concept at best, the older kids probably didn’t consider B.A. “cool”. For me, Joe Jackson (whose I’m The Man parodied fads six months before Kool In the Kaftan), Wreckless Eric and Jona Lewie all outflanked him in terms of authenticity and at least matched him for lyrical prowess. Not that it made much difference – Robertson’s records repeatedly hit the charts in this period while Lewie and Jackson struggled and Wreckless fell short. Just after Kool In The Kaftan climbed into the Top Twenty Initial Success, actually his third LP, appeared.

It’s not a bad record at all but what I find problematic with it is there is just “too much” B.A. Robertson on it, if that makes sense – he’s always there, filling in any gaps with stupid voices and jokes, like a very nervous first dater scared of leaving a silence. Very “in your face”. In the sleeve-notes it says he found inspiration from Nick Lowe, which I can see just about see. But Nick, although also capable of a good pun, was and still is a master of restraint and that is the key difference. Though Robertson can without doubt come up with a good tune, he couldn’t leave it alone for any length of time. If he could have relaxed a bit and let the music do the talking for a while it would have made for a more enjoyable album to listen to now for me. He tends to get a little irritating over an album’s length as the whole while he seems to be shouting “look at me I’m B.A. Robertson”. But I suppose those were the times and people obviously enjoyed a novelty, which made him stand out form the crowd.

Besides the singles (and there were five of them on Initial Success – the Pop/Rocking Goosebumps preceded Bang Bang but flopped) there are some fair to decent songs on this LP. She’s A Beezer may be nonsense but it does have a killer chorus, Man Or Mouse possesses plenty of drive and Fall In Luv is a more or less straight ballad that cribs a bit of Here Comes The Night. The nadir though has to be the irksome Eat Your Heart Out Sandy Nelson, a pseudo-Disco piece of too-pleased-with-itself twaddle. But to be fair there is plenty of variety on this record which did find favour with many fans in 1980. The bonus tracks include b-sides (the pick of these being 2(b) B Side The C Side as close as he got to being really New Wave), a spirited live track from the venue in 1980 Language Of Love/Hot Shot and some solo piano and vocal versions of the hits from the 2004 Edinburgh Festival.

On the two following albums Bully For You and R’N’BA he wasn’t quite so frenetic a presence and Bully For You is probably the best of the three reissued here. Funnily enough it marked a commercial decline, with no hit singles and the album itself barely scraping into the charts. A lot of it is okay lightweight Pop/Rock, kind of like the stuff Cliff Richard recorded at the time (not much of a surprise as Robertson wrote Wired For Sound and Carrie for Sir Clifford), but by toning things down a bit Robertson was more effective. Saint-Saens was another of those puns he could never resist, but probably his best single, a fine piece of Power Pop (of course it missed the charts completely). This reissue does have the drawback of a horrific “Stars On 45” mash-up of his hits and the theme to Saturday Superstore as bonus tracks though! On the plus side more live stuff from 1980 and Edinburgh offset the more prosaic items.

R’N’BA does, as the title would have you suspect, tread very much a Blues/Soul path, with mixed results. Robertson doesn’t really have the voice for it but you have to give him credit for attempting something a little different. He gamely tries on “Hold Me”, fighting a losing battle whilst Maggie Bell sneaks away having easily stolen the show. Apart from this cover nothing else much stands out – solid performances but few thrills. The bonus tracks here include an unlikely German version of Bang Bang, some b-sides in the same vein as the LP and more from the 2004 performance at the Edinburgh Festival. This was to be his last album to date and apart from the single not much of a commercial success with Robertson then moving onto song-writing.

In the final analysis it would be churlish to deny Initial Success or BA Robertson a place in the 1979/80 Pop vista – the success of the singles and album itself warrants that. It does however sound pretty “of its time” to me in the way a lot of the other acts also recording then don’t. Initial Success is really a well-produced, inventive record, but a bit faddy and flaunts its cleverness just a bit too much for me. However, fans will want it as this album has never seen CD release before and the collection is put together really well with bonus tracks and sleeve notes as one would expect from Cherry Red. Anyone new to the phenomena of Robertson, I fear, will struggle to understand quite what’s going on.