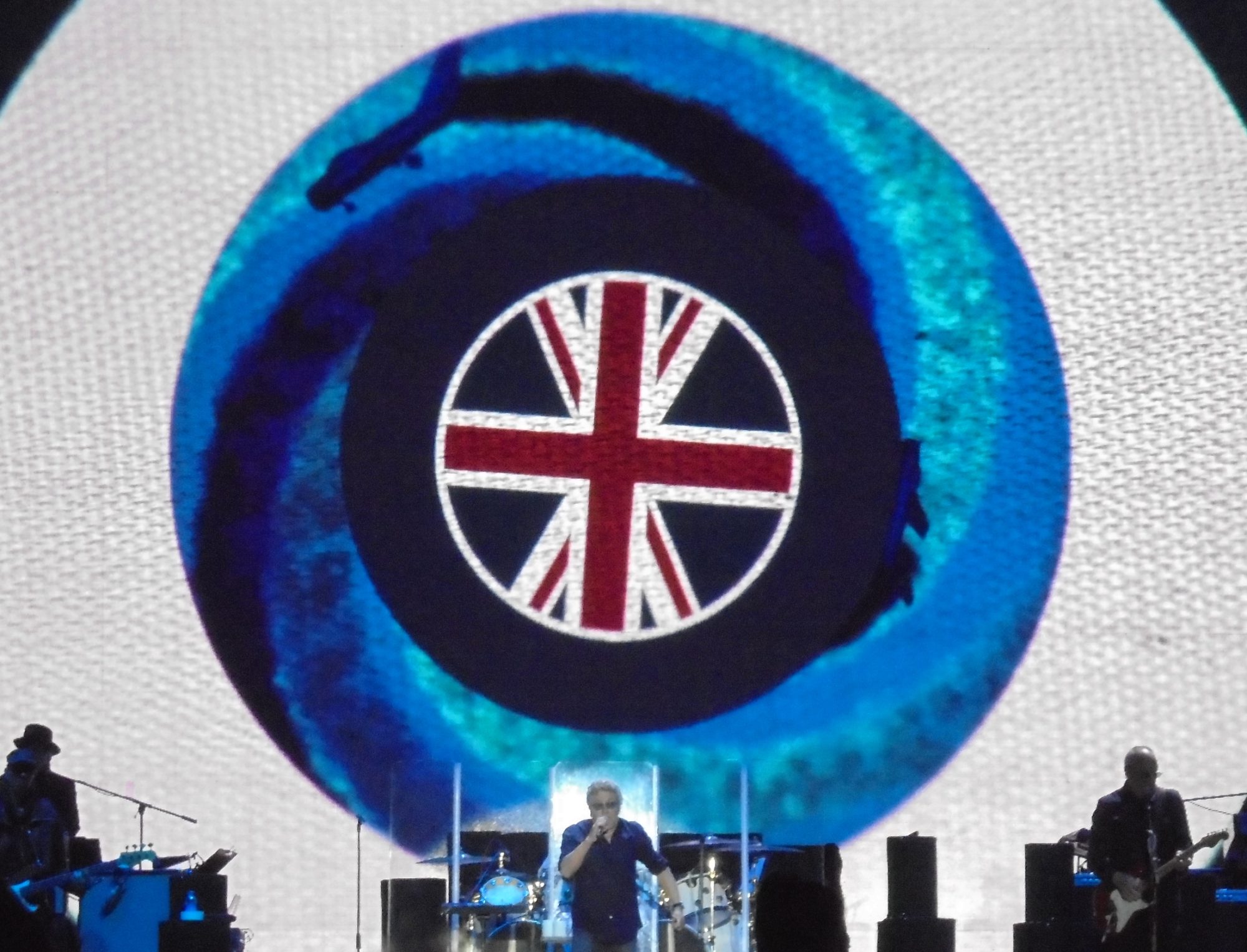 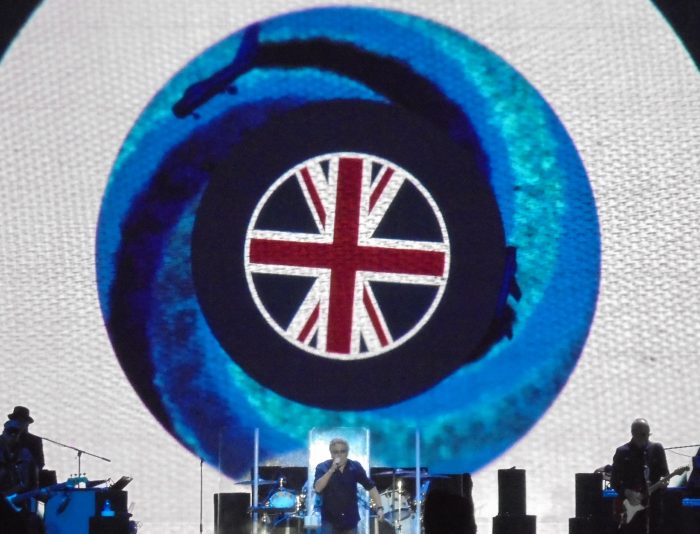 Planning a trip to Spain why not factor in some sun baked “Top Gear” rock in the Basque country I thought. About an hour from Bilbao and Vitoria’s main square was already host to an event which locals of all ages were embracing the night before. Adjourning to an Alaves supporters bar for the Euros and some point and see what you get pintxo or Basque version of tapas and all is as well with the world as it gets.

The following day the reason for the luxuriant countryside and former European “Green Capital” status was revealed as torrential rain meant the dismantling of the main square stage was a bit of a downer. Less so the discovery that the festival site was like a concrete car park which a pre beard Manics may have played and had covered over like they threatened to do with Glastonbury.

Even so Lucinda Williams stepped on stage in the early evening of the first day to a crowd who were largely peering at her from between the guy ropes of assorted beer tents. That wonderfully lived in voice and “Drunken Angel” got the steaming masses swaying a little bit before “Honey Bee” prompted some tentative air guitar action. As the rain slowed more people ventured towards the stage for a rousing finale of Neil Young’s “Rockin’ in the Free World”.

For me a blast from the past was former Plasmatic Jean Beavoir. “Masterplan” from the aforementioned shock rockers could have been improved with a chainsaw but serviceable covers of Ramones songs he had worked on and Led Zeppelin’s “Rock and Roll” which I don’t think he was claiming credit for proved entertaining enough. I think my fragile ego would struggle with the biggest applause being for other people’s songs but a surfeit of confidence didn’t strike me as an issue for Beavoir. More his own hair metal and the theme from Sylvester Stallone’s “Cobra” which was as good as I imagined. 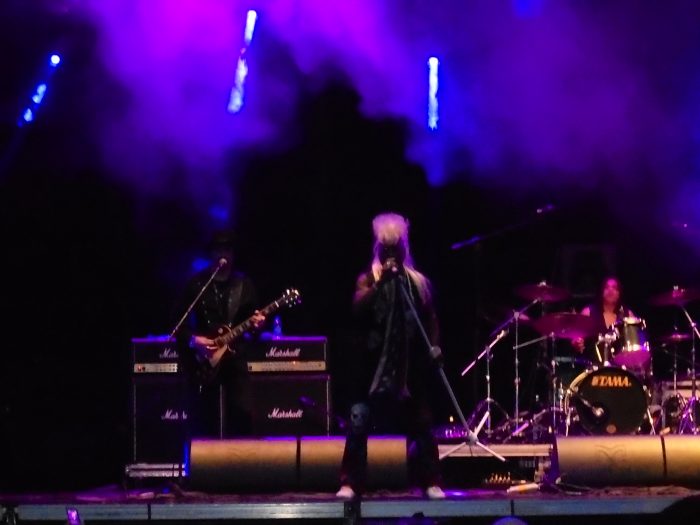 Whilst stood urinating against a fence some solid metal riffage entailed me trying the tricky middle age man manoeuvre of stopping mid flow and getting back onside for Danzig. Now I remember the Misfits as being ludicrous but not in a good way and didn’t have high hopes for this but with Prong guitarist Tommy Victor turned right up and a cover of Sabbath’s “N.I.B.” I was pleasantly surprised. If only the Danzig would sack the almost comically moody singer and his portentous Jim Morrison baritone I could see a future for this band.

What we need now is a silent film then. Oh yes we do when it’s “The Loudest Silent Movie On Earth”. Directed by Bjorn Tagemose “Gutterdammerung” is a Tarantinoesque battle between the majesty of loud music and the uptight repression of religion for custody of a hugely symbolic guitar. That the guitar was thrown down from heaven by a fallen angel Iggy to be fought over “West Side Story” style after a shout of “rock ‘n’ roll or death” was splendid. Sound tracking it all with D.O.A.’s “Fucked Up Ronnie’ the grin inducing tin hat.

In a role which can’t have been a stretch Henry Rollins was there in person to play a self-righteous priest. A silent film is the perfect vehicle for his sub Nietzschean ramblings about the likes of suicide and whilst a live band hammered out Metallica to the accompaniment of enough explosions to keep my fourteen year old self happy the thought of him running round in a cassock trying to avoid a version of Nirvana’s magnificent “Territorial Pissings” amused me as much.

It would be stupid to read too much into “Gutterdammerung” but on the walk back to the hotel at four in the morning that wasn’t going to stop me. Somebody somewhere probably had a problem with an organ being played over silent films but in the wake of the Paris shootings and music being described as “acts of the devil” by religious schools this is serious. Rollins acknowledged that Lemmy’s appearance got the biggest cheer of the night and as ever the final word for zealots of all persuasions is best left to the Tank General: “If you don’t like it fuck off.” 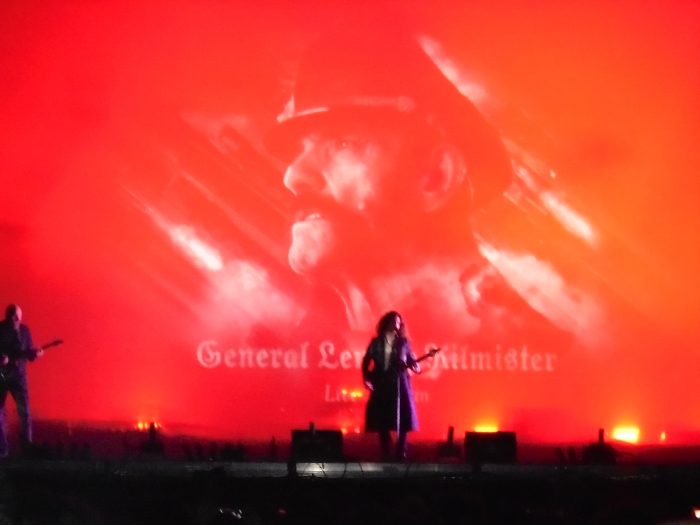 Suitably refreshed the second day didn’t see Australian proto punks Radio Birdman bring the Bondi Beach weather but prompted the first and only crowd surfing I witnessed in a set which warmed up splendidly. Beforehand keyboardist Pip Hoyle was taking photographs of the crowd but during the likes of “Aloha Steve & Danno” and “Man With Golden Helmet” rocked his dad slacks with aplomb. The seemingly obligatory covers were a surprising “Shot By Both Sides” from Magazine and given that their moniker came from mishearing a Stooges lyric a less unexpected “TV Eye”.

Next up on the Bill Haley Stage was Imelda May who was not so much knocking on Shakin Steven’s door as sat in the living room wearing his slippers. Realising my mistake I hot foot over to the Scientists whose “We Had Love” immediately contained more primal rock ‘n’ roll than May’s back catalogue. Having seen the Scientists many years ago and deciding to try someone different I can now only apologise to Kim Salmon and mates. Bet you did “Swampland” and I have only myself to blame.

Now The Who may have played Woodstock as the sun was coming up over the cheese cloth but time has moved on and the headline act aren’t hanging on all night. Any concerns about the commitment of Townsend and Daltrey is however dispelled during an opening of “I Can’t Explain” and “Substitute” that has as much windmill guitar and microphone lead lassoing as can reasonably be expected of men in their seventies. This odd couple remain more than bright enough to see the potential for ludicrousness and Daltrey’s exhortation to “Help The Aged” seems to celebrate it before “The Kids Are Alright” helps ease the way into a spirited “My Generation”.

Of course The Who are not as captivating as in their heyday but during the likes of “You Better You Bet” the video screen backdrop comes into its own. Here you’re reminded of how iconic the imagery associated with the band has become and that for better or worse the London Tourist Board owes them a fortune. Footage of their younger selves and departed members induces a certain wistfulness but the pop art graphics are true to the band and add a theatricality that I imagine Keith Moon would have enjoyed. Or blown up.

With even their weaker songs sounding like great Oasis ones we were soon on the home straight before a finale of “Won’t Get Fooled Again” threatened to shred Daltrey’s voice. If it came in the service of the “Meet the new boss, same as the old boss” and scream it seems almost worth it for the hairs on back of neck moment for me. As true as the day it was written and seeming particularly pertinent to the slow motion car crash of Britain’s European Union vote at present.

It was disconcerting as I moved around Spain to discover the UK had been renamed “Xenophobia” and the face of the country was clown prince Johnson or propaganda minister Farage.  If the current situation doesn’t highlight the folly of depending on politicians of any description nothing will so just be European or better still global. We have nothing to lose but our reputation.

The musical lesson is if you’re going to get on stage and rely on old stuff make sure you used to be the best band in the world.  After a brisk walk to another stage Marky Ramone is already drawing on the songs of a band that were forty years ago but few people cared. I remember standing in a field when U2 fans caused Joey to sneer “plastic bottles, huh” as their bombardment seemed to cement the Ramones outsider status. Back in the time machine and the stand in Joey is running round like a headless chicken for no apparent reason as a crowd which dwarfed their prime time following welcomed drummer Marky and his Blitzkrieg with open arms. Everything you could hope and expect is played as numerous bite size encores cross everything off the list. 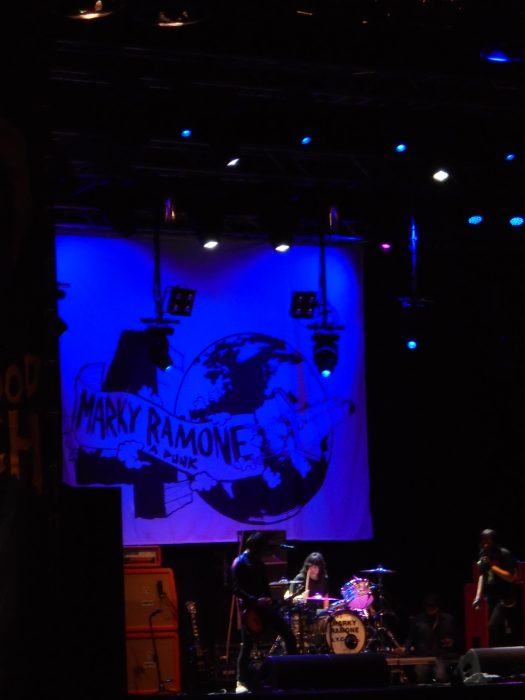 I can’t think of another band as neglected when they were around as the Ramones that could now fill stadiums and sell tee shirts so successfully. Maybe having a good time whilst giving the surviving members of such influential acts an overdue lap of honour is the best justification for some of these line ups. During the lean times bands have sustained a career on a world stage ready to do this but there is surely room for more decent young bands to stop the thing from ossifying? Meantime several drinks in on a cold night in northern Spain there is nowhere better to be bellowing “California Sun” into the sky.