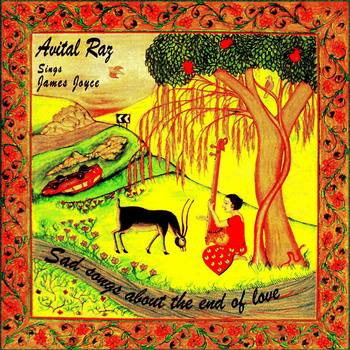 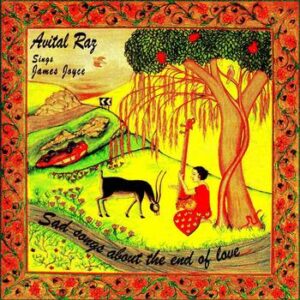 Avital Raz – ‘Sad Songs About The End of Love’

‘Sad Songs About The End of Love’ unlocks the exploratory nature of sound itself, through sensory psychedelica blended with Indian raag. Avital Raz, Jerusalem-born but now North-West based musician and singer, takes us not just through songs, but creative stories behind them, composed in relation to James Joyce’s ‘Chamber Music’ poem cycle.

Joyce meets Jerusalem? Penned words meet performance? It’s a fusion Raz handles masterfully; using her sound to unlock the stories and sensory experiences behind the poetry. Illustrating that those poems are so much more than sweet-sounding lines, is like how she suggests there much more to the experience of love than the initial high: through sound.

Her vocals are especially powerful; capable of hitting heights which invite us into those heady emotions of being young and in love, but are beautifully haunted rather than conventionally crafted; showing us too what it is to fall. The album started out one summer night after Raz’s marriage plans were abruptly cancelled, and continues to show that even when love ends, it still spins out intensity and tales aplenty…

‘Turning the tracks into an act of defiance’

Testing the boundaries between poetry and performance seems to be Raz’s objective of intensity; pulling the listener into the ancient art of Dhrupad-style singing (especially powerful in the track ‘I would in that Sweet Bosom Be’). It is this, combined with the Indian instruments and raag, which James Joyce’s grandson condemned as ‘inappropriate’ for the original poetry – turning the tracks into an act of defiance. And it’s defiance Raz delivers using vocals as her versatile tool; guttural, growing sounds from an emotive core. Recorded 12 years ago in India and Israel, it is only since the copyright on Joyce’s work has fallen that Raz has been able to make the release, on Friday 12th February 2016.

And even though time has laid between Raz and releasing the record, the situations her lyrics cleverly shed light on seem timeless. These are tales of life – romances, reflections, and rebuttal– re-evaluated through her unique style, sitar-influenced strings and spiralling vocals. The situation of young intrigue which opens the album, lingering in lines such as ‘I heard you singing’, whilst ‘My Heart’ invites us into the bubbling excess of a track, possibly reflecting the heady lust of a young lover enchanted by ‘kisses, kisses, kisses…’. Yet all the while she uses words to unnerve, her style of singing taking the traditional meaning to uneasy highs. As Joyce reflected on his original ‘Chamber Music’: ‘I was a lonely boy, walking about by myself at night and thinking that one day a girl would love me’, it appears similarly that the highs Raz conveys are like those of the adolescence Joyce alludes to; intense, emotional and full of energy. The voice throughout and its accompanying music never fail to shy away from experimentation.

Surprisingly then, given its boldness, this is Raz’s first ever recorded album (as until this point limited by copyright) – though it’s her third release on Sotones, following on from the acclaimed ‘The believer’ in 2014. The first track is a cross-cultural fusion of enchanting vocals and a violin-like sound which appears to be contending for voice too. Although the lyrics invite us to ‘Lean out of the window’, where I find my ear leaning is towards the unfolding competition between woman and instrument; growing more intense over the course of the track. Strings versus singer. This is an engrossing start to an album which highlights Raz’s capacity to directly affect the audience with her music. Not only does she reveal the capabilities of voice, but the capabilities of our own senses; for example, the track ‘My Dove’ surprised me with its multi-layered sitars and nature sounds, topped with Raz’s winding vocals. I could see birds, feel breeze, all from one listen; thrilled by my own abilities.

‘Attempting to contextualise sound rather than categorise it’

The tales of music here free our thoughts and invite exploration. A ‘dove’ is a symbol of freedom too, and the arrangement of this album suggests Raz’s own determination to celebrate creative freedom; determined to not let gender or convention restrict her attempt to cover the work of Joyce, one of Ireland’s most notable poets. The stories behind the tracks may vary from the deepening tones and course of ‘The Twilight’ to the ‘Strings’ ‘by the river where the willows meet’; freely exploring nature without wandering into the confines of romanticism. Raz’s own time studying music in India and learning more about the improvisational nature of sound seem to have forged her approach as attempting to contextualise sound rather than categorise it; opening up feeling rather than attempting to abide by form and theory. This is a brave bid for freedom, possibly driven not only by the heady heights of adolescence as aforementioned, but from a woman who may well have encountered obstacle and prejudices herself; determined to overcome.

What is there to overcome? Well, the title of the album itself ‘ Sad Songs About The End of Love’ suggests an underlying sadness and this is what Raz’s album seems to acknowledge; that the freedom of telling tales does come with it’s darkness too. This may feed from her own experience as an instrumental artist; having faced oppression and marginalised not only as a woman making music, but because of the uncompromising attitude in her expression. And we can hear so in her wider work, for example in some of the stunning tracks from her 2014 EP ‘The Believer’. Songs such as ‘Blue Ball Moan’ present upbeat acoustic, yet lyrics which clearly explore the alternate as ‘hands curl into arms’ and ‘insides rip’. This work shows a greater lyrical depth, highlighting how Raz has developed over time.

‘Stirs up the tall tales which seem to surround young lives’

Yet the subtleties and vagaries of the ‘Sad Songs about the End of Love’, are perhaps strangely more alluring. It is the track ‘Because 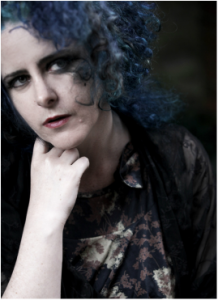 Your Voice’ which brings a tonal change to the album – drifting onto the downtempo. We hear dual lyrics, male and female, dwelling over the past tense ‘who was my friend’, which makes us question whether the stories behind the songs have taken a turn because of some connection? This thinking over others, past friendships, does seem to feed into the theme of adolescence I mentioned earlier. Both Joyce and Raz may well use their art as a form of ‘chamber music’: expression which stirs up the tall tales which seem to surround young lives like a ‘chamber’: think again lust, infatuation and friendships.

Following the tonal change, the second half of the album does appear darker; marking the album in its journey from the ecstasies to the extinguishing of young emotion. The track ‘Silently’ conjures up a cruel coming-of- age – there is a sensation of lost innocence as the lyrics ‘combing her long hair’ hum over a sound I cannot shake from my mind – it sounds like the sipping of scissors. Combing or cutting? As aforementioned, this is music which makes us reconsider our own senses, makes us question what we hear. Again, Raz is unwrapping tall tales of experimentation, many which have a duality to them. It could well be cutting, could well be combing. An act of cruelty or moment of creative rebellion? Just the album opens with a more optimistic acoustic element, it also delves into darkness – exploring the dualities of life, just like early adolescent experimentation. In this way, it seems appropriate that what is Raz’s first album has an air of the adolescent to it, often through the perspective of a speaker reflecting on another.

But by no means is this an immature album. The blend of cultures as well as instruments is a real thrill, from the jazz-infused wail of ‘I Would in That Sweet Bosom Be’ to the bold electronic closure of the final track ‘Sleep now. Raz shows her musical capability which parallels her praise of narratives, stories. Our lives have tales worth telling – we can unlock new enchanting experiences in our own life just as we can appreciate new sounds in a human voice. It falls to us to interpret the final track for our own creative freedom, a theme aforementioned. Is it an invitation to ‘sleep now’ or uncovering a craving to regress? Either way, it is one of the boldest breathiest pieces on the album, showing that over the course of music, we can come closer together by unlocking the tales in our lives we may not have touched for a while. Raz parallels this by illustrating and using the structure of past poetry to show that present connections can still be created.