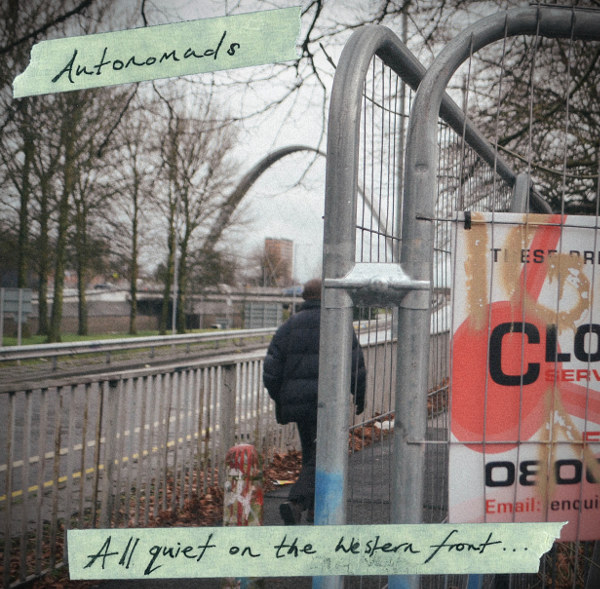 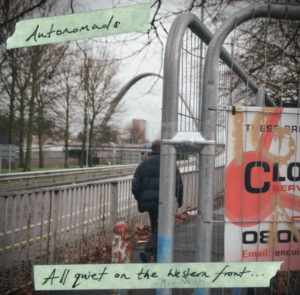 Autonomads – All Quiet On the Western Front (Ruin Nation)

If you liked the last album (reviewed here) then this latest Autonomads release should be right up your street.  It has the same mash up of tuneful yet angry hardcore, ska and dub that makes the Autonomads unmistakable as soon as you hear them.  They draw on those who have travelled this road before, what you might call the Generation X crusties: Citizen Fish, AOS3, Culture Shock, RDF, Inner Terrestrials etc. But these millenials are having their own punk-ska-dub party and having their say.

The lead track “All Roads Lead to Hulme” is about how the area of Manchester they call home is suffering the curse of all our major cities: “Communities ripped apart as the developers move in & if you don’t like it you better get moving”.  Yes, you’ve guessed it…..gentrification!  Like Durruti they are not afraid of ruins: “Stuff your yuppie flats, we’re happy with the rats”.  What starts off as a subdued rocksteady lament gathers pace and breaks into guitar driven hardcore followed by a brilliant Hammond-esque organ interlude   and by the end it’s bouncing along nicely.  There is no happy ending. This is real life.  But there is always anger.

“Babylon Rock” gives us more reportage from the streets.  It paints a grim but true picture of this country in the current age “Lights flicker in the houses.  Towns busy, binge drinkers.  Streets full of rough sleepers. Prisons full of dole cheaters”.  Something to be proud of?  They have a point as they cock a snook at moronic anti-immigrant logic born of nationalism: “Make this place great again? Its just blip on the map soiled by shame”. The song is pure Ruts adoration – whether by design or not.  After all, the Ruts were/are big fans of reggae and play(ed) it with a punk attitude, but with respect.  Similarly the Autonomads are punks who love their reggae so they may have just arrived at the same place by travelling a similar route.  A bass driven verse and it’s corresponding drop out dub section is very much in the vein of “Jah War”, while the chorus is more upbeat like, let’s say “Something That I Said”.  Even Eeyun’s vocal begins to take on shades of Malcolm Owen’s delivery.  A good catchy tune made all the better  with the organ wurlitzering around the place and some call and response shouts.

“Run Like a Girl” chops and changes between a mid-paced clanky bass driven tune and upbeat chainsaw guitar punk.  To the Autonomads “Run Like a Girl” is not an insult and neither is “cry like a girl”.  This song levels the damage that mysogyny, gender stereotyping and discrimination have on whoever is on the receiving end of it – male or female.

The final track, “Dog” is their two fingers to work.  Just over 2 minutes long, it’s a bouncy little number and the chuggy guitar has a little of an Inner Terrestrials feel to it.

As I said at the start, the Autonomads have their own unmistakable sound and every track on this offering is good in its own right.  There is perhaps less anger in the vocal delivery than previous releases, but still pointed anger in those lyrics, accompanied by well written and well played tunes.

Available from Ruin Nation, or the band’s Bandcamp page.  The Autonomads are also on Facebook and have a website.