Home Blogs Autonomads: One day this will all be gone…everything now! – Album review 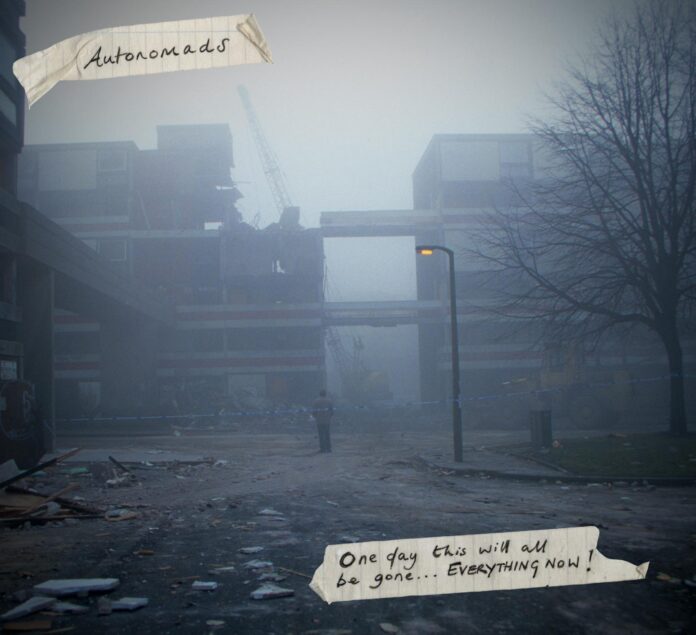 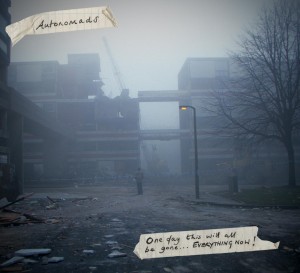 The Autonomads deliver up an angry album railing against Cameron’s Britain over a diverse soundtrack covering punk, ska, dub and folk.  Music for our times, says Nathan Brown.

To use the phrase “ska-punk” often produces a look of derision because it covers a multitude of sins.  The Autonomads are a bunch of anarchists from the North West with an angry “fight back” message that they deliver with a melding together of punk rock, clear guitar hooks and a driving ska rhythm section.  To call this “ska-punk” just doesn’t do it the justice it deserves. We are in the homegrown territory of Culture Shock/Citizen Fish/Inner Terrestrials and especially AOS3 rather than the mainly US influenced “ska-core” that was prevalent 10 or more years ago.

What makes the Autonomads stand out from so many other crusty-ska-dub punk bands is the earnestness and anger.  You can tell they mean what they are singing about.  It’s not a dream, it’s their existence they are narrating.  Advice on staying out of the grasp of the law, lamenting the destruction of working class communities, tales of squatting….the lyrics have a conversation-down-the-pub feel – real life reportage, tales of daily resistance, what you might call “realpolitik”.  That and the fact they are talented musicians with a male/female vocal dynamic.

This latest offering follows on from their earlier releases in a similar style but comes across as more angry and somehow with the heavier punk sound they seem to have  more melody and tunes.  Yeah, there’s still ska beats, groovy bass lines and upstrokes on the guitars but there’s a whole lot more anger.  And in these unprecedented times of attacks on working class communities and anyone who chooses to resist the state we need a lot more anger.

“Conditions of the Working Class” is very reminiscent of AOS3 from their heyday over 20 years ago: echoey guitar, reggae bass lines and drum rhythms. Towards the end in kicks an organ playing with the calibre you’d expect from a Two-Tone band and the song builds to its angry conclusion. The song takes a look at industrial history (the song title is from an essay about life in early industrial Manchester by that Engels fella who used to hang round with Marx) and compares with the modern day, the message being that nothing much has changed.

“The A Word” moves on from the rhetoric to the practical, giving activists who fight back the advice “Don’t brag, don’t gossip, don’t snitch, keep quiet”.  The tune flips between skanky verses with crisp guitar lines and the high gain punky choruses.

“Dickenson Three” is where they reveal their squatter roots, not the last mention of a “Section 6” in their lyrics.  A section 6 used to feature on a the Legal Notice that used to protect squatters from eviction prior to the 2012 change in the law.    Doubtless this tune will be popular with those who still occupy empty properties alongside Zounds’ “Dirty Squatters” and Inner Terrestrials’ “Squatters Rights” as will the next track “Self Help Housing” a tale of breaking open a squat to find somewhere to live.

“Headlines” is a tale of a woman losing her job, being stuck on workfare and ultimately taking her own life.  The chorus and accompanying guitar riff on this ska-punk tune are incredibly catchy: “Beyond the headlines, life happens here”. A reminder that real people’s lives are being ripped apart by the ideologically driven attack on working class people that politicians call “austerity”.  I prefer to be honest and call it a class war, waged by the rich.  Part way through this corker of a song, the bass and guitar pay homage to Babylon’s Burning – it brought a smile to my face sat here as I am in my Ruts T-shirt.  The dreaded “JCP” (Job Centre Plus) pops up its ugly head in this song, and like squatting, it’s a subject the band return to.  The follow up song “See you at the JCP” is a tongue in cheek song about coppers and prison officers ending on the dole.  No sympathy for Babylon when they end up with the people they’re used to pushing around.  The song closes with an angry poem that takes its cue from the likes of John Cooper Clarke, Nick Toczek and other “punk poets” in its delivery.

“Our Elizabeth” mixes up a catchy as hell pop-punk chorus with ska-punk verses. The top tune for me on this release, it’s a republican anthem for the modern age, taking a swipe at the Daily Mail’s obsession with “benefits cheats” at the same time.  Nice work!

Intelligent, angry and funny at the same time.  The way I like my revolution.

“Coppers in the dance” is where the band get back to the dubby sound that was more prevalent in their earlier releases, and typifies their sister band “Black Star Dub Collective”.  Pigs invade the carnival with the usual outcome.    “Breadline Britain” is another angry punk meets tuneful ska ditty.  It asks the big question “What are we gonna settle for?” as this country descends deeper into poverty for the have nots.  “Gary Fisher” is the third squatter song, but delivered as an acoustic number complete with fiddle.  It falls somewhere between “England” by the Angelic Upstarts and The Levellers.

“Notes from the Underground” starts with melancholy piano before a fast paced melodic pop punk tune kicks in that would sound at home on a Fat Wreck Chords album.  The message: the system is sick.

The closing track “Everything NOW!” is an accapella take on the old traditional “Glory Glory Hallelulah”, and the lyric sheet is spot on when it says “Everything went Chumbawamba”, cause that is who spring to mind straight away.  It addresses the way we are all tossed about the in the sea of capitalism and the thing that I have been mulling over of late that when we are skint we buy from the very multinationals that leach money from our communities and reinforce the economic system that is making us skint.  Big businesses don’t pay good wages, that’s how they can sell things cheap, and the people who buy cheap things?  People on shit wages.  The cycle goes on, stuck in the capitalist trap we feed our exploiters.

All in all this a well produced, well rounded album with some diverse music on it.  And importantly for a band with a serious message they come across as vibrant and angry rather than dour and resigned to a miserable fate.  With a theme of poverty, what’s happening with benefits and the removal of squatter’s rights in Cameron’s Britain, you could almost say this is a concept album. The most important concept of all is to fight back!

Released on 7 labels, with decent lyric/art booklet you can also get yours from the band: https://autonomads.bigcartel.com/product/one-day-this-will-all-be-gone-everything-now-cd

Respect paid by Nathan Brown. You can read more from him here.