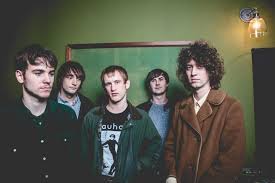 In some ways Gullivers is the perfect place to catch a band like this when they are on the up.

The claustrophobic, tiny room is filled with the music freaks who know a great band and is full of sound and fury as the Leeds band deliver that tidal wave of brilliantly layered noise and atmosphere.

Their Dissemble debut album is one of LTW’s favourite new records of the year as they delve into the dark heart of northern music – the twisted and stark bass driven brilliance of early Joy Division, Sisters Of Mercy and the Chameleons – those bands that delivered music like an Apocolypse Now and captured the post industrial with a perfect soundtrack. they have been known to sport a Bauhaus T shirt and understand the brilliant originality of these bands that have been sidelined by the critics for far too long.

Autobahn use these as a starting point and then take it into the 21st century and the album is expertly nuanced and fascinatingly dark and addictiveley melodic and well thought whilst live it’s louder and more wall of sound.

It could be that the thrill of bringing the noise drowns out some of their subtleties but this works well in their favour and once your ear tunes into the twin guitar assault you can pick out the treated guitar lines building layers on top of the driving bass and the fractured drums.

Frontman Criag Johnson has a powerful presence- a scowling intensity as he glares into the room murk and even kicks a selfie taking mobile phone out of someone’s hands with the same kind of intense precision as he delivers his melancholic vocal lines.

It all adds up to an intense and powerful strange brew, a band in love with the undertow of darkness that makes/made northern music so enthralling and has the sound and songs to deliver a new century version of a timeless post industrial noisescape.

Autobahn will own next year’s festival new band stages.

Support band Blooms are also really onto something with their quirky, twanging, left field indie pop perfectly constructed around their three piece format. The divebombing bass lines are frenetic and dripping with melody and the swinging guitar lines counterpointed perfectly and their energetic, seat of the pants set was filled with fascinating musical nooks and crannies as the band delivered a great set of adrenalised indie guitar action.