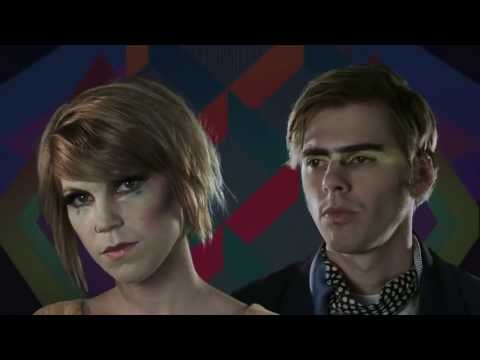 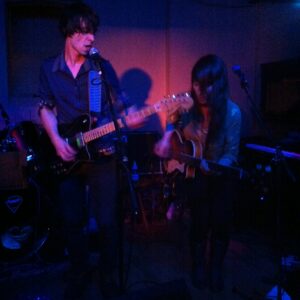 Austria’s Velojet are over from Vienna for their first ever London shows, with a headline slot Tonight (Friday 14th March) at Hoxton Bar and Kitchen. Willow Colios got a sneak preview last night as they supported Rotifer at Servants Jazz Quarters.

Like some of the best bands lighting up the wider European music scene right now, Velojet’s sounds and influences aren’t easy to pin down. They don’t quite fit into any particular musical grouping, but their sound is expansive, revolving around dynamic synth sounds, rather than two guitars / bass / drums.

Synthesizers are wailing like guitars throughout, taking the solos, while the Telecaster / Hofner-style Bass / Drums combo give the songs a bouncy danceability with added flourishes of guitar fuzz on tracks such as latest single Cold Hands.

At times they could be compared to Of Montreal or perhaps even Yan Tiersen, particularly on penultimate song, The Night.

“This used to be an indie song back in 2007 but now indie is dead we’ll make a jazz ballad out of it.”

…says singer Rene before going into the haunting I Follow My Heart.

The vocals sound a little cracked in places, but this almost adds to the intensity.

Singer Rene explains: “This is what air conditioning does to us Austrians” referring to their flight over that morning, delayed by fog, but even his ‘broken voice’ still sounds pretty damn great.

For every half-arsed indie rock wannabe band in Britain there’s a band in Austria, Holland or Italy who are killing it like Velojet do here. They’re only in town for two days so check them out tonight with support from Secret Company and The New Union.

I’ve had the chance to see Rotifer several times now and they just keep getting better. Latest LP The Cavalry Never Showed Up is their best yet with some of the most eloquent politicized lyrics around in 2014.

In this spirit it is apt that Robert Rotifer dedicates The New Fares to Bob crow tonight saying;

“Bob Crow once said something on Question Time about Europeans coming over and taking jobs; well that would be me, but apart from that he was right on.”

There are so many gems in the set, indicating not only the strength of the latest record but older tracks too, such as Aberdeen Marine Lab, which has a Stonesy ‘Get off Of My Cloud’ shuffle. But it’s recent single Black Bag which really steals the show with added lap steel courtesy of Allo Darlin’ guitarist Paul Raines and Marlene from Velojet on bass, allowing Rotifer bassist Mike Stone to play the Servant Jazz Quarters’ house piano. The meditation on the singers own death is not far short of transcendent.

Ralegh Long during his earlier set, notable for a stirring cover of Neil Young’s Harvest Moon and featuring ex-Hefner man Jack Hayter on pedal steel, said that if you have to explain a song then it’s a failure. That may be partly true, but it depends what the songs are about. Rotifers are often so layered with political history and resonant of personal experience that the explanations are funny and poignant in equal measure.

Of the song Last Century, the singer says:

“This one’s about how in 1914, just like now, they thought everything was fine … so you get to hear it and then The Third World War breaks out … it’s not about Ukraine.”

Eloquent and politicised Rock and Roll never sounded so good. These guys can really play too – check them out when they play The Country Soul Sessions in London on April 6th.

~
You can find Velojet, Rotifer, and Ralegh Long on Facebook / tumblr.  You can also check out The Velojet official website.