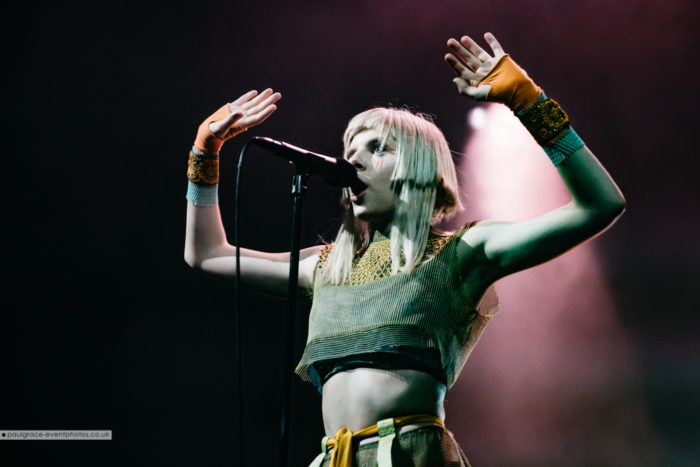 Aurora dazzled fans at London’s O2 Forum with a show that incorporated a troupe of dancers and banter about drunken animals mating. Louder Than War’s Andy Duke improves his zoological knowledge and reviews the Norwegian singer in action.

Last year I got acquainted with a quirky Norwegian television series called Dag. It follows the trials and tribulations of a reluctant relationship counsellor. Framing the great performances from the cast are a revolving array of dark and brooding tracks that mostly emanate from the country in which this show is set. Aurora’s music would be a fine musical fit for this black comedy and, like Dag, the Stavanger-born songstress provides intense mood swings between dark and light. And that clash of emotions was visceral at London’s O2 Forum on the singer’s short UK tour to promote her second full-length release – Infections of a Different Kind (Step 1).

Beneath a starkly lit stage, Aurora makes her entrance with minimal pomp and circumstance. The capacity crowd shakes the walls with applause as the singer slowly makes her way to the microphone stand. Beginning a gig with a delicate a capella rendition of Nat King Cole’s Nature Boy is a brave undertaking. With audiences expecting everything but the kitchen sink being thrown into an opening number, particularly given the epic nature of Aurora’s releases to date, a solo cover is unexpected. But it’s effortlessly delivered and incredibly well received. As the track develops, a second voice is suddenly added to the mix. Silja, one of Aurora’s keyboard players, delivers pitch perfect harmonies that blend beautifully with the lead vocals. The rest of the band make their way to the stage for Churchyard. Comprising of a drummer, two synth players and a skilful purveyor of the Fender Bass VI – the band are tight, exceedingly dynamic and provide an impressive blend of backing vocals that recall the lush harmonies of Clannad and Enya. Fans of Aurora will be fully aware that her output is exceptionally well produced and, for want of a much better phrase, ‘big’ sounding. It’s refreshing to see this same sonic might duplicated live without the use of backing tracks and samplers. 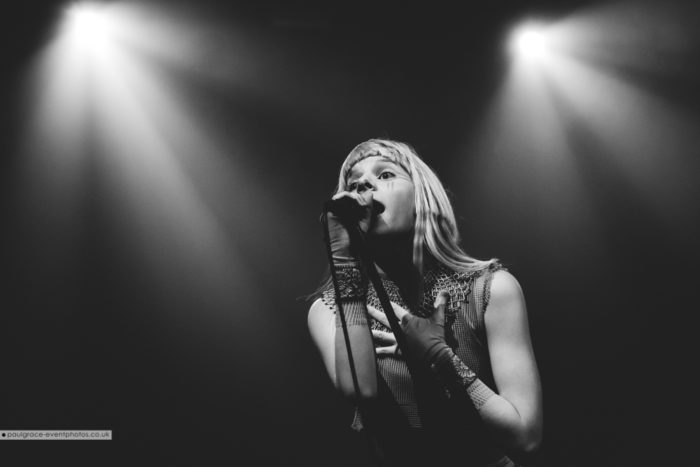 Despite her powerful singing voice, Aurora’s onstage banter is incredibly muted and almost veering into squeaky territory. This coy demeanour feels almost like a personality shift between the coquettish persona she employs mid-performance. Perhaps it’s due to the symptoms of the flu, which she apologises to the attendees for having, or just a by-product of the ‘light and dark’ she juggles in her work. She also possesses an endearingly caring quality which was displayed after spotting a heat-fatigued member of the audience some 15 rows of people away from the stage. “Are you ok, my dear? Maybe you need medical attention?”, she asks the ailing member of the crowd. Within seconds, one of her bandmates throws a bottle of water over to the ill fan to restore both hydration and pluck. This incident is not surprising as the venue is decidedly hot and, thanks to The Forum’s poor ventilation, two other members of the crowd will require special assistance by the end of the evening.

The heat has no bearing on the energy of the performers, however, and a trio of dancers augments the troupe a quarter of the way into the set. Fans of Aurora’s sublime video for Queendom immediately recognise the threesome and the theatricality of the concert goes into overdrive. Winter Bird, Runaway and the aforementioned Queendom are choreographed with the drama and urgency that one would normally associate with what I like to call Eurovision Earnestness. It’s delightfully over the top, camp and incredibly entertaining. A highlight of the evening is the rendition of All Is Soft Inside. From its sparse quasi-Oriental beginning to its ‘Bass VI With Octaver’-infused outro, the track showcases the tremendous talent of both the drummer and Aurora’s multi-layered vocal delivery. In addition, she managed to do the Thin White Duke proud with an understated yet emotive ‘Celtic-meets-Scandi’-tinged cover of Bowie’s Life on Mars. 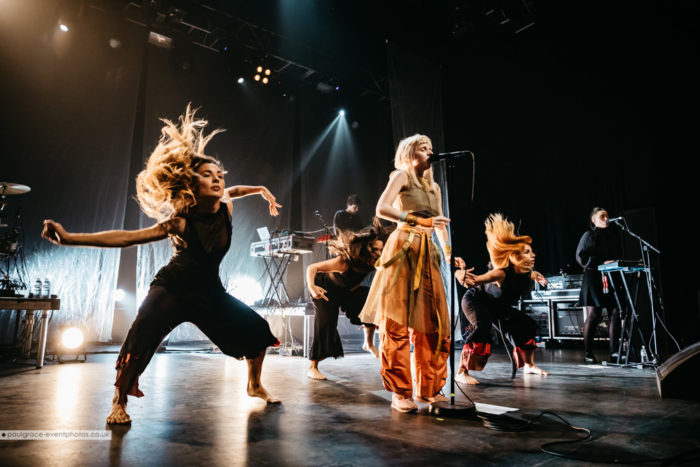 Aurora is a captivating presence and possesses an otherworldliness that fits her easily into the enigma category. The hypnotically catchy elements of her material are enhanced in a live setting and she possesses enough edge to counterbalance the touchy and feely elements of her music. Despite being proudly off the grid in terms of social media, Aurora is zeitgeisty by accident and manages to create a sound that is born to be added to film and television. It’s cleverly done and puts her in league with Florence & The Machine, Bjork and Kate Bush. Her fans clearly adore her and, with an elasticity to gender preferences being referenced in some of her recent material, it’s not surprising to see strong support from the LGBTQ+ Community. An eccentric who isn’t afraid to exclaim her love for polar bears and enlighten us on the mating dynamics of inebriated animals in her onstage banter, Aurora is a true one-off.

The fourth series of the aforementioned Dag recruited Steve Wynn from The Dream Syndicate to write all of the show’s music. Should this fine programme return for a fifth outing, I propose that they enlist Aurora to do the same as the emotional range in her music would be a perfect fit.