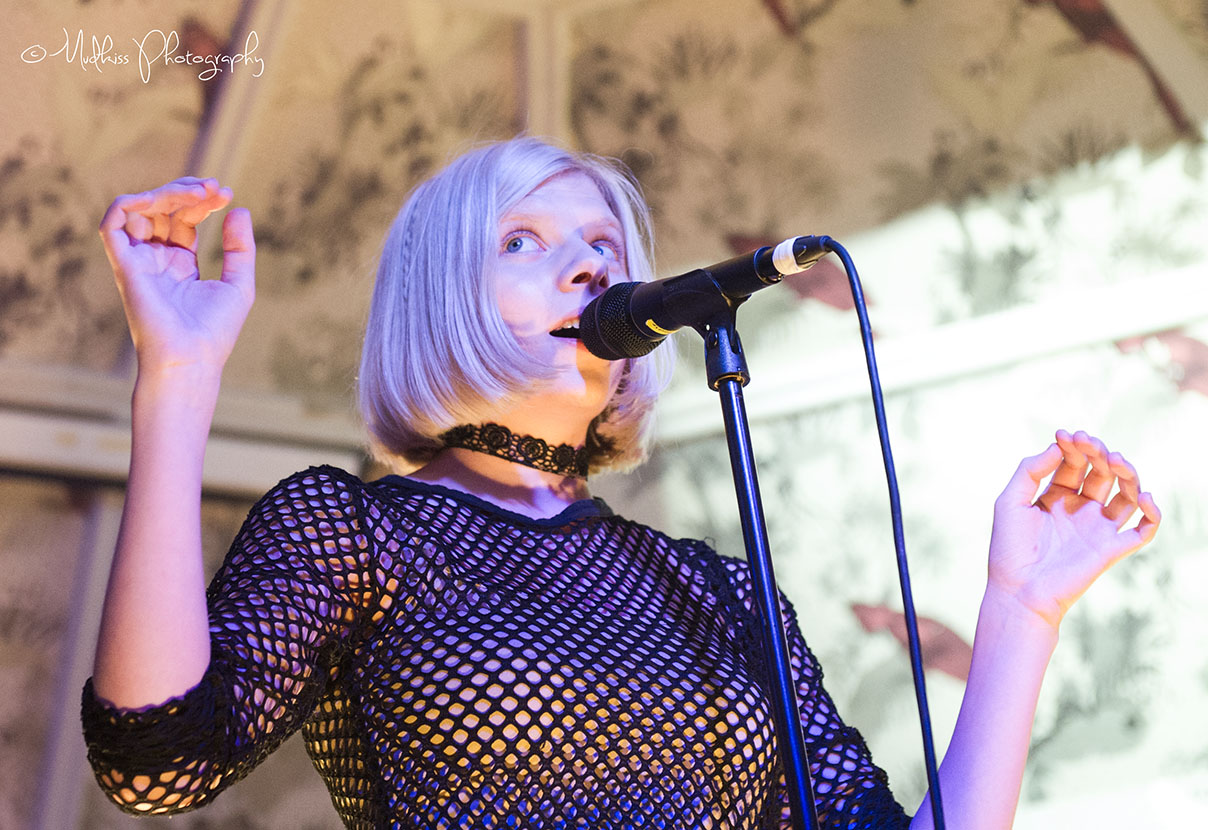 Last night I squeezed myself into the buzzing crowd assembled in Manchester’s Deaf Institute awaiting the arrival of Norwegian songstress Aurora and her band. An expanding flurry of anticipation swirled through the room until finally the musicians appeared on stage with Aurora following, almost hesitantly finding her position at the centre of the small stage. A stream of focused, yet explosive energy burst forward as we were treated to Warrior, Runaway and several other tracks I’m not as yet familiar with but plan to be, as without exception each track she offers is a precious pearl, a gift from her very soul. Between songs she seemed genuinely overwhelmed, stunned at the audience’s wild applause and rapt attention. It was at these moments I could easily see how young she is (nineteen) and her coyness was endearing, her smile and shock that were so many of us there was sweet and sincere. 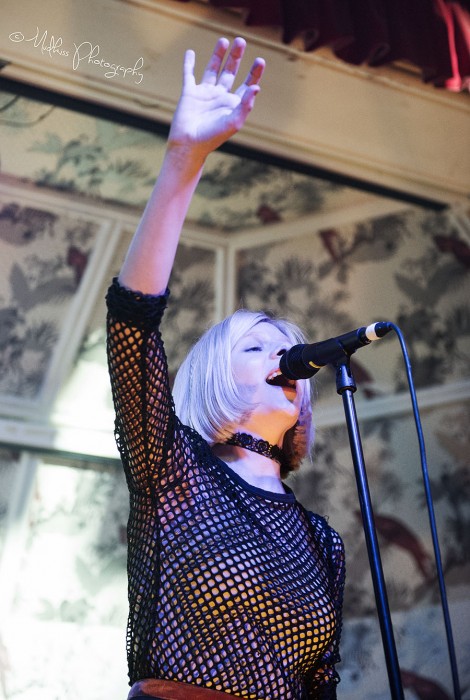 She mentioned that she’d never been to Manchester before and she’d enjoyed what she’d seen of the city – she couldn’t believe how many people had turned up on a cold and windy Monday night. The warmth of the crowd was huge, as was the appreciation of the band and the chemistry between the band themselves, clearly a close-knit unit was just as fuzzy and affectionate.

There seemed to be almost two manifestations of Aurora on stage tonight. In complete contrast to the shyness shown between tracks, I also witnessed a mighty performer with a style all of her own. She totally immersed herself in each of her songs, many of which are stories. Although her songwriting and vocals are stunning, so too is her use of gesture, mime and pure dramatic expression. Everything was taken to the hilt, no holding back, yet there was remarkable control in her performance and an impeccable sense of timing. This is why the slightly jittery between song banter and gentle humility each time the crowd applauded was so striking.

Her music brings to mind the mountains, dizzy heights, snowscapes and snowflakes dissolving on your eyelids, it touches you deeply, it whisks you away. During chilling Murder Song (5, 4, 3, 2, 1) you could have heard one of those snowflakes fall, so hushed was the crowd. Aurora is just as skilled at more dynamic, faster paced material such as the wonderful Conqueror and the quirky and sublime piece of synth pop I went too far which she described as a “kind of love song I wrote when I was younger.” 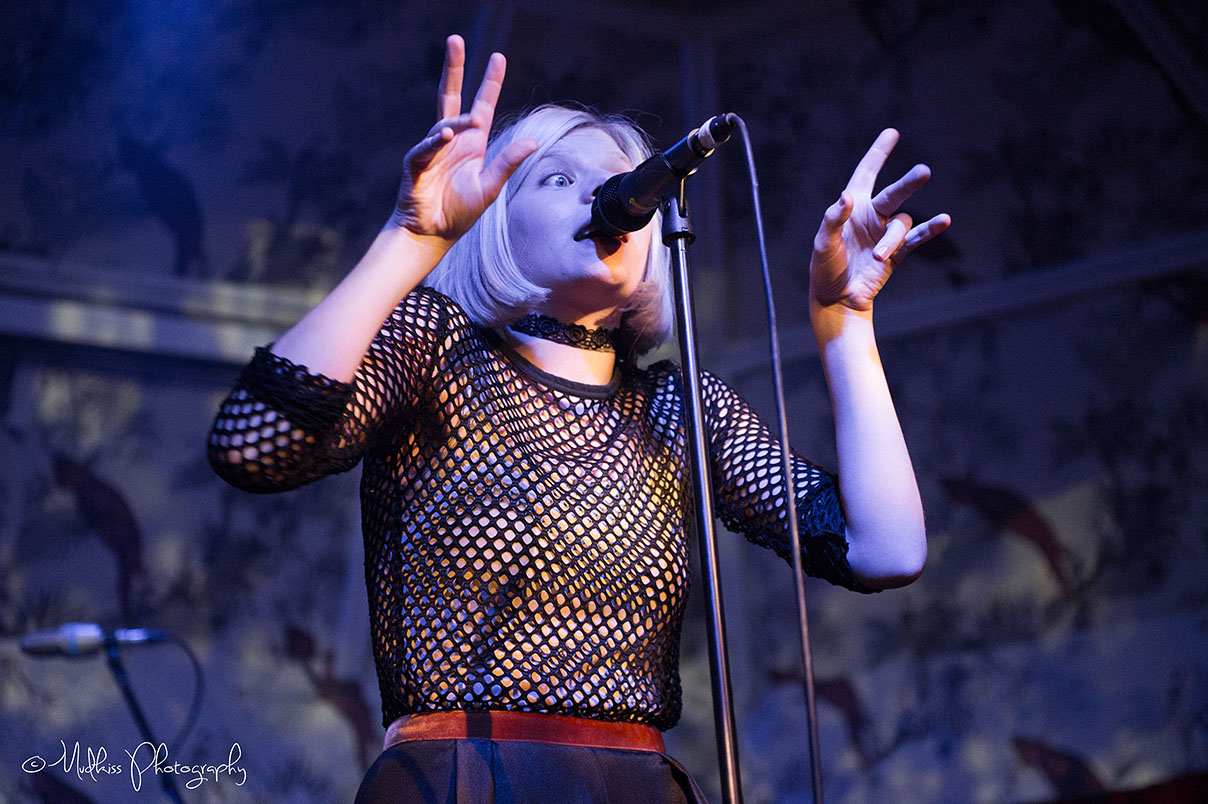 There was no way she was going to get away without an encore which was a truly beautiful, song called Through the Eyes of a Child from her soon to be released album All My Demons Greeting Me As a Friend. Then, just when I thought the night had wrapped itself up she announced “The plan was to leave the stage but I thought it was a fitting time to honour a very beautiful man”. Somebody half whispered, half gasped the magic words “David Bowie” from the gallery and the piano introduction to Life on Mars quiveringly entered the room. She sang with such love and reverence we were once again captivated. It was a lovely, bittersweet way to end the night and as I walked out onto Oxford road I couldn’t see the stars twinkling – only clouds – but I sure knew they were there, glistening in the winter sky.

All words Mary O’Meara. More writing by Mary on Louder Than War can be found at her author’s archive. She tweets as @maryblackcat1.