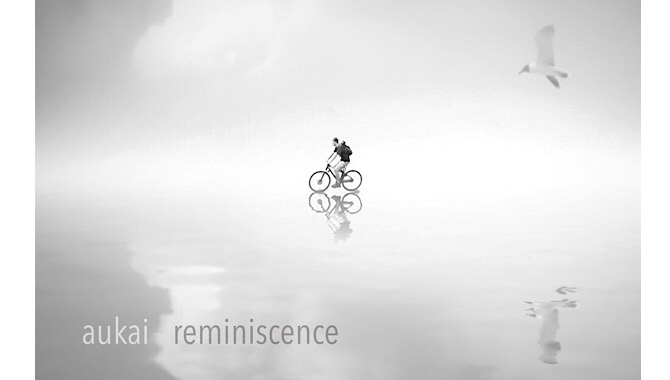 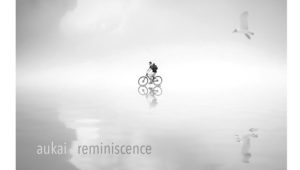 Cinematic is a word that is perhaps overused in describing instrumental music of any hue, but the music created by Markus Sieber, a.k.a Aukai, on his new album Reminiscence, conjures expansive high altitude vistas in widescreen, painted across the mind’s eye with a musical lexicon that articulates the lofty, remote peaks of the Andes.

Working with Anne Muller on cello, Bogdan Djukic on violin, Angelika Baumbach on harp, Jamshied Sharifi on piano, Alex Nickmann on synth and Miguel Hiroshi on drums, Sieber takes the lead on an Andean string instrument similar to the mandolin, known as the Ronroco.  Essentially the same crew that augmented the Aukai sound to such rich, full effect on this year’s earlier release, Branches of Sun, this new ‘mini album’ constitutes ten new tracks that offer a more readily accessible narrative arc than its predecessor while losing none of the beautiful impressionism that Aukai has come to be known for.

Debuted recently by Mary Anne Hobbs for 6Music, the EP heads off on an elevated trail to La Joya, the name of a valley at the trail head to Iztaccihuatl, the third highest peak in Mexico.  The South American sunlight shimmers between the notes as they multiply moment by moment, our journey underscored from the outset by the plaintive cello and a sense of optimism tinged with bittersweet reflection.  As the track closes, darker clouds gather as we gain height and climb up towards the remote interior.  From the start of the trail, familiar mountains appear so often as long time friends, confidants to the inner monologues the walker confides en route.  The long sloping ridges and plateaus in silhouette wrap around us with paternal affection.  We gain comfort perhaps, from their presence, enduring long before us, with the silent promise of enduring long after we depart.  Maybe there is something even divine and god-like in their longevity, perhaps the closest we get to apprehending the eternal.  But in the late afternoon, a turn through a shadowy corrie… and we regain a shift in perspective: we are no longer enveloped in the sunlit arms of the mountain, but traversing the gaping jaws of a beast indifferent to our fragility.  In the final bars of La Joya, I feel the hairs begin to rise on the nape of my neck, as the journey, both outer and inner, begins for real.

The stepping stones and strings that introduce Reframe provide a cooler, more solitary leg of the trail.  We navigate packs of ice and pockets of snow as we ascend, the timbre of the drums shards of broken rocks, our feet finding purchase as we push on through the scree.  We recall these aspects of the walk now as brief glimpses, momentary even though our thinking was expansive at the time as we crawled across the arduous hours of ascent, our bodies alive and the mountain still above us.  In Reframe we are still seeking that fresh perspective from which to think back on the events that have made us, we are still clambering to step out of our workaday lives.

And then we Turn A Leaf, we catch the view, catch our breath and regain some true perspective in the quiet solace of a sunny spot, the slow wind fluttering through the feathers of the crows, rippling through our thoughts, weeding out the past from the future and checking the map before we move ahead.

But it is in the nature of lengthy spells in the mountains, especially alone, that thoughts come to us unbidden like flotsam on an ocean current.  There is subtle percussion and an ambience here redolent of dripping water as we pass beneath damp over-hanging rocks, the run-off from streams far above, greenery projecting out from every viable crevice.  Every step can be its own Closed Eyes Flashback as we pick our way out of the valley.  Here, the music is sparse.  There is space and time (too much time) to think until the thoughts think us and we become servants to the whim of our memories – are we ever anything but?  At this rarefied altitude, we begin to transform; the alchemical process begins.

In Memory Cue, the Ronroco is to the fore, each note echoed and reverberating between the mountain walls, gaining in multiplicity, triggering a break through, like a glimmer of sky between cliffs up ahead, a gulley revealing itself.  A way out or a way in?  In Memory Cue, the past and the present exist in the same dimension as we pass through the tangled shadows and the intermittent light as we near the summit.

We find our steps treading softly once more, through the forests of the lower lands as we return In The Trees, a reassuring symmetry of ascent and descent, in Ronroco and piano, green leaves and ferns carving up the vista, so long above our heads.  The light is fading, our journey’s end is near but this gentle landing is a waking up, a reinvigoration and the sense of something – someone – new being discovered.  Over the mountain, over the journey everything changes.  The sky, the light, the hour, the date.  The walker, readjusting her sense of scale, finds Home all over again, where footfalls on floorboards reveal new and unexpected creaks and groans.

Reminiscence is the coda to Aukai’s creative output of the last two years.  Returning from this trail head, I wonder where new paths will take him.

You can check out the video for La Joya here: