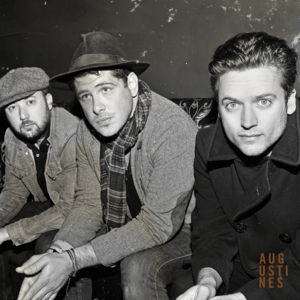 Arms held aloft, sweat pouring down his grinning face, Billy McCarthy stands triumphant in the centre of the crowd. Around him, the rest of Augustines bring the strumming of their acoustic guitars to a crescendo, providing a spectacular close to a fantastic live music experience.

With the packed crowd pressed in around them, a myriad of iPhones are held aloft. For once it doesn’t feel unwelcome. This impromptu jam session, starting after the lights had come on and people were heading for the door, is a truly special moment and everything that live music should be; raucous, engaging and unique.

Following the dropping of the We Are prefix to their name, Augustines self-titled follow up to 2011’s impressive Rise Ye Sunken Ships has charted well and seen them appear regularly on the playlists of XFM and national radio stations. A measure of any band’s calibre though, is what they can deliver live and Augustines have built a reputation for putting on a fierce show.

Arriving on stage with a fist pump and a glass raised to the crowd, they kick off the show with Headlong Into The Abyss from the debut album. The energy and excitement coming from the band is instantly infectious, and quickly permeates the room. It’s clear from the off that this is a band who are riding the crest of a wave and enjoying every moment.

The majestic Juarez could be their stadium filler and is still a criminally underrated anthem. Set in the deserts of New Mexico, its steady build leads to a rousing chorus. Cruel City from the new album keeps the energy going, displaying elements of Springsteen influence, infused with early U2 melodies.

Billy McCarthy is engaging throughout, sharing stories and self depreciating anecdotes with the crowd. That grin is etched on his face as he sings Manchester’s praises “Elbow, The Smiths, Stone Roses. Manchester, Music Town!”. The audiences response leaves him in no doubt, “Yes we fucking are!”.

It’s no secret that McCarthy’s been through some difficult times and the loss of his brother James is a constant presence in the bands early songs. You’d be hard pressed to find a songwriter more willing to wear his heart on his sleeve and few who would be brave enough to expose themselves so openly. His vulnerability is matched by a genuinely grateful and humble attitude and you can’t help but like him.

Book Of James is a heartfelt ode to his brother but it’s during a stripped back, slowed down version of Philadelphia (The City Of Brotherly Love) where the emotion comes to the fore. It’s etched across his face and the whole room is entranced, another beautiful moment.

They finish the main body of the set with Nothing To Lose But Your Head, the first single from the new album. With its extensive radio play it might well have been many of the audience’s introduction to the band and it certainly leaves them wanting more.

The encore itself has the feel of an after party, the band bouncing off each other, trying requests from the audience and hushing the crowd down to deliver an unplugged number from the front of the stage.

It’s not over yet though. With the lights up, there’s a commotion at the front of the crowd. The band, with guitars in hand, are battling their way into the crowd. They come to a stop in the middle of the room and finish what tops out at a two hour show with a rousing acoustic sing a long, including an epic performance of East Los Angeles.

On record Augustines are a great band. Live they are phenomenal. As the band make their final exit the crowd are buzzing. Watching live music you want energy, you want passion, but above all you want to experience something that those who stay at home and listen to the record will never get. This was delivered perfectly.

All words by Jon Birch. This is Jon’s first piece for Louder Than War .