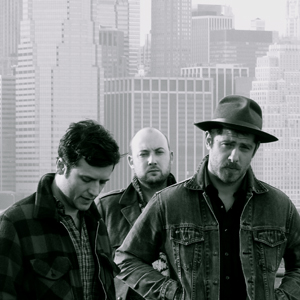 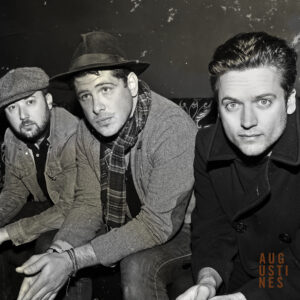 With their second album set for release in a few days, Augustines took to the stage at The Lexington on Monday to deliver a cracking set. Robert Pegg takes up the story.

Four minutes, Billy McCarthy tells the tightly packed and intimate Tuesday night London crowd, pouring in from the cold and into the upstairs room of The Lexington on Pentonville Road. Four minutes to walk to the subway that used to take him to his last shitty job, two and a half to three years ago. Four minutes to tie the boots that would take him to that subway and four minutes to queue for coffee before starting the job he had before Augustines were born.

He makes the comparison because four minutes is also the time it took to sell out this one off UK show and with spare tickets as rare as shit from a rocking horse, anticipation and expectation is running high tonight. The audience can feel it, and the band can feel it.

They’ve got their work cut out though. Maintaining the momentum of  a seemingly endless string of blistering live performances and a universally acclaimed debut album, Arise Ye Sunken Ships, is going to be no easy task, but if success could be measured in the reciprocal love that Augustines and their fans have for each other, then their mission is already accomplished. The world of music is fickle though, loyalties can be dropped just easily as they are forged when confronted by that ‘difficult’ second album, and tonight will be something of a test of those loyalties.

Even before the band come on you get the sense that this is the last time Augustines are going to be playing a venue of this size. The word is that lead singer Billy’s vocals are not so good and he had to have a shot of steroids to keep his voice on form just for tonights performance. Not long into the show he openly admits to seeing an ENT specialist and that he took a “shot in the ass” to be here.

The by now familiar but never less than exciting set from ‘Arise’ is punctuated and expanded on by new songs as well as an introduction to fourth Augustine and one man horn section, Alan Haniford. ‘Cruel City’ and ‘Nothing To Lose But Your Head’ are already sounding as familiar and loved as ‘Juarez’ and ‘Chapel Song’, both of which benefit from new arrangements.

Early signs that the second album is going to be as accomplished and as mature as the first can be seen in the  plaintive ‘Ghosts’ and the majestic simplicity of ‘Walkabout’. These last two showing that McCarthy’s vocals, raw as they are tonight, can  effortlessly switch from full on rock to mournful balladeer within the confines of a single song while the thunderous rendition of ‘Ballad Of Patient Man’ becomes not just a great song, but a pure distillation of naked energy.

Augustines aren’t just a great band, they have an interaction with their audience that’s never studied or forced. Billy McCarthy carries the cracked good looks and air of affability that makes him come across like Clark Gable’s illegitimate and smarter half brother. Like the intimacy of their music, they are just about as genuine as you can get and the contact between them and their audience is as personal as if it was in your own front room.

At the end of the set,the encores started to seem longer than the rest of the show. Nobody wants to leave, and one thing you can say about this band is they never outstay their welcome. How could they? They are Augustines.

The quitet arrangement of ‘City Of Brotherly Love’ is every bit as celebratory when it’s stripped down and piano led as it is in the full, rocked out, anthemic  version. Other acoustic highlights are stripped right down to the bare bones with McCarthy giving a raw and emotive rendition of ‘East Los Angeles’ and the final, final encore of ‘New Drink For The Old Drunk’ is sung, sans microphone, in amongst the audience as though this is his very last minute on earth. There is nothing left to do except applaud and admire.

Show over, some people begin to quietly take down the A4 sheets of paper that read ‘TONIGHT. AUGUSTINES. SOLD OUT!’  down from the walls and carefully roll them up to keep as souvenirs, and the crowd that poured in earlier gather their coats and trickle out onto damp, North London pavements. All of them are smiling, many are moved to tears, the warmth and energy that Augustines bring with them being carried away across the city like a benevolent virus.

During the show, stood immediately behind me on a slightly raised level was a heavily pregnant woman and her partner. For much of the night she was stood, gently cradling the weight of her unborn child in her interlocked palms. What better way to bring a child into the world than to allow it to gestate to the dirty lullabies and life-affirming force of nature that is Augustines.

New album released in the UK 3 February 2014 and available for digital pre-order now.