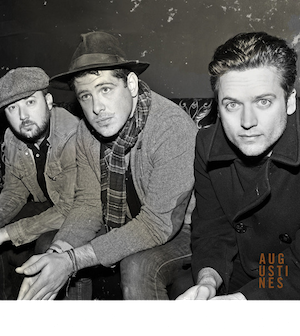 New York’s Augustines (formerly We Are Augustines) as a band have always been able to tap in to the raw emotion of their personal experiences and channel it in to a cathartic release for band and fans alike. Now, after dropping the affirmation, the band release their self-titled second album, LTW’s Robert Pegg reviews.

Undoubtedly one of the best recording and live acts around, Augustines had it all to do to follow up their debut, Arise Ye Sunken Ships, an album where personal ghosts were resurrected, laid bare and put to rest again. Now comes the self-titled sophomore album which, I am more than happy to say, is every bit as good as the first.

Opening with the gentle lullaby, I Touch Imaginary Hands, Augustines wastes no time tearing straight into the already familiar singles of Cruel City and Nothing To Lose But Your Head. Ripped along by Rob Allen’s thundering and energetic drums there is no real let up until the beautiful melancholy of Walkabout, a song as big and expansive as the state of Alaska which reputedly inspired it.

In amongst the more anthemic songs, Augustines remains as personal and introspective as ever. The pleading of “You haven’t seen the good in me yet.” on The Avenue and the repeated mantra of “I can change, I can change, I can change” on This Ain’t Me has all the desperate, plaintive tone of a man who knows he really can’t change, but he’ll damn well try. This is what Augustines do best. Balancing the enormity of sound with the intimacy of the lyrics.

It’s difficult to choose a stand out track as they are all of an exceptionally high standard, but if Now You Are Free* isn’t the huge anthem that will be sung at live gigs by groups of friends, arms around each other across every continent then there is something just not right with the world.

There’s no filler or flab here. Each track is meticulously crafted and co-produced by the band themselves and Peter Kadis, the man that gives The National their own particularly glorious sound. Augustines is nothing less than latter day secular hymns for the dusty back roads, sung by fractured altar boy, Billy McCarthy and  backed up by the unfeasibly talented multi-instrumentalist Eric Sanderson and possibly the best rock drummer around today or any other day, Rob Allen.

This is much more than a second album. In fact, with the (slight) change of name from We Are Augustines this could rightly be considered another debut. If I can be allowed the conceit of a literary reference, the two sit together as companion pieces in much the same way as William Blake’s eighteenth century Songs Of Innocence And Experience, beautifully illustrating the conflicting states of the human condition. Both albums see Augustines reach into their soul and emerge with something glorious, profound and celebratory.

Augustines are touring the UK very soon. Get these albums, see them live and prepare to be uplifted.

*I mistakenly credited this song as ‘Ghosts’ in my live review a few weeks ago. I’m happy to both apologise and correct that mistake now. Sorry, guys.