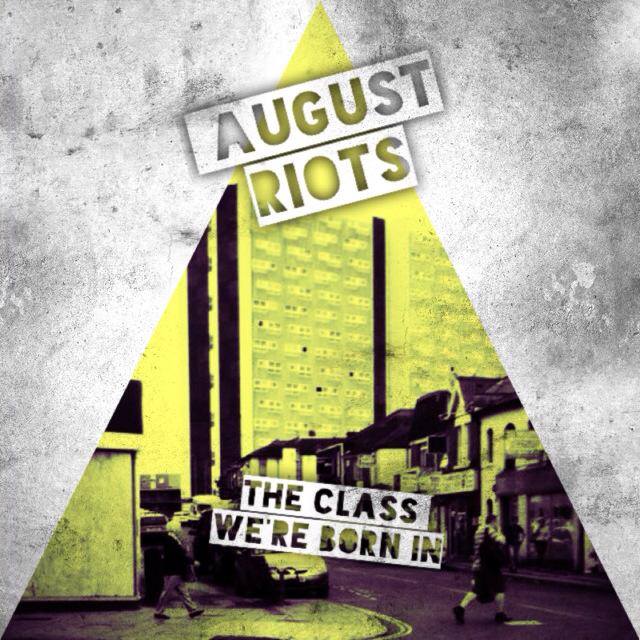 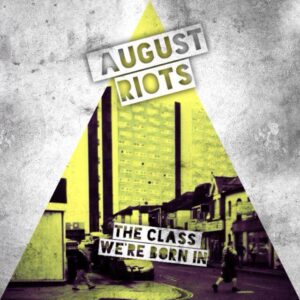 New, old-fashioned, angry-young-man, working-class-hero, guitar-band from the South. There you go;  Ged Babey avoids using the words ‘political’ and ‘punk’ in sub-heading.

Top marks for a great punk rock band name. It is not just the eighth month of the year, the word ‘august’ (pronounced with the emphasis on the gust) also means “inspiring reverence or admiration, majestic” making August Riots the most-rebel-rock band name since Manic Street Preachers.

A quick glance at the sleeve and certain words from the song titles spring out at you; White. Riots.  Boredom. Revolution. Street.  Alarm bells start ringing (or police sirens).  Uh-oh! Political Punk Rock.  (Not quite, this is a band with members in their 20’s, 30’s and 50’s who are as into their indie rock from White Stripes to Arctic Monkeys as they are the Clash.)  So before I’ve even heard the songs I’m imagining (self) righteous Billy Bragg-isms or worse still, ranting rhyme schemes with obligatory Greedy bankers and Tory Wankers…..

August Riots manage to avoid the pitfalls and are neither self-righteous nor crass.  They get it about right. Maybe they come over as a bit naïve and they may not have any ‘answers’,  but you can’t question their gut-level honesty and idealism.  On Hearts and Minds they sing:

About reading and believing what the Daily Mail and UKIP say presumably. Using simple language, straight forward sentiments and a singing voice which sounds a tiny-weeny bit like a young Sting. the August Riots combine common-sense politics with decent, if rough & ready, tunes.  Musically they sound a bit like Boy-era U2 playing with cheap guitars and no decent effects pedals and Rat Scabies on drums.  When they veer into a bit of reggae it sounds like Love Lies Limp by Alternative TV.

Another line which sums up their attitude & approach is this one, which is again pretty non-specific:

Hailing from the estates of north-west Southampton the band are made up of the McGeachie brothers Paul & Gary and mates Mike Meredith and Mike Todd. The latter being former singer and guitarist with a band called Eat the Document, he now plays drums.  Mike is an inspirational bloke; a reformed drinker, he formed his first band about ten years back at the age of 40-something, he coaches Youth football teams, gigs solo with acoustic guitar- spiting out folk-punk-protest songs, and when he laughs its like a hyena has been sucking on a helium balloon.  I like Mike. He’s a down-to-earth, no bullshit bloke.  Part hippy, part punk, part old school socialist -as is his mate Mark McGeachie, father of the brothers in this band.

Some drummers keep a beat and are practically human drum machines, Mike on the other hand, goes at it like a bull at a gate,  all round the kit, speeding up, slowing down…. five beats where one would do… He’s a great drummer, fearless and the foundation on which this band is built.

Six songs.  Cheaply recorded in a couple of takes and so, by punk rock standards, alright, in a a “the drums quite good, the bass is too loud and I .. can’t hear the words” kinda way.

141 Saint Marys Street is an address that a lot of people may recognise (its the location of Britains Best Small Venue  2013 -the Joiners, “where the heart of the city goes beat beat beat”

The most touching line is  ” Johnny Mach Schau we’re thinking of you…”  which remembers a local hero, singer from a band called Mach Schau, who tragically died very young.

Protest lyrics be they specific or vague, have to have a bit of poetry about them to work in my book and despite being a slightly confused or confusing song   Boredom Killed the Revolution contains a great couplet.

Born behind the barricades   / The Molotov will light the way

and Black & White has this one

Musically August Riots are maybe a bit more indie-rock than punk bringing to mind bands with a bit of social conscience like the Enemy, the Cribs and even Stereophonics when they were young, hungry and rehearsing in a garage.

It’s early days but its good to hear an articulate, tuneful band writing songs about more than just cigs and alcohol, girls and good times without coming over as ranting or preachy and overall having a positive message and attitude.

August Riots are punk rock’n’roll born without a silver spoon in its mouth or expensive gear that Daddy paid for, and they’ve got something to say and some decent tunes to play. Listen up. They are here for hearts and minds…. and to make you dance.

All words Ged Babey. More writing by Ged can be found in his author archive here. Band photo by A Selfie.