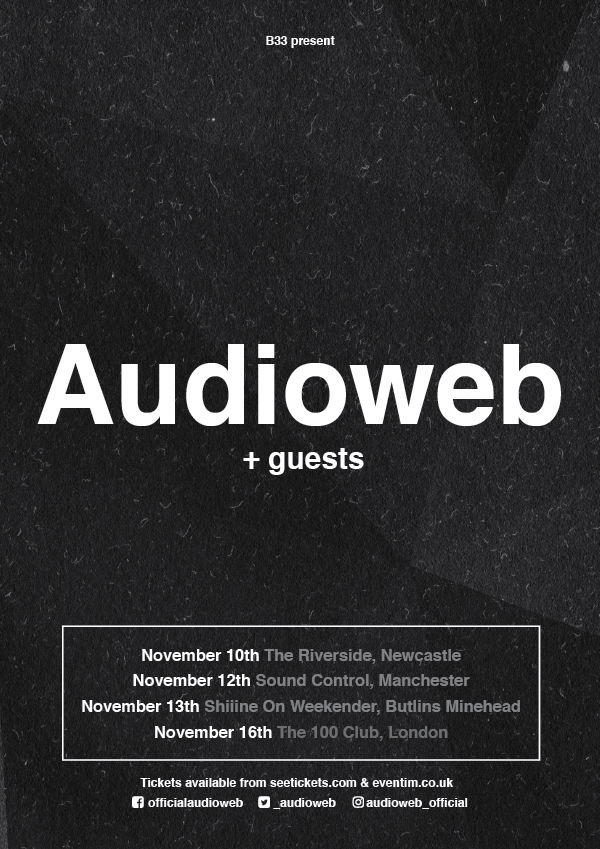 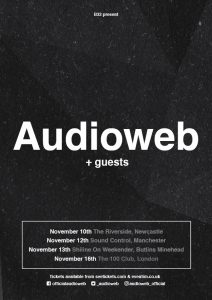 One of the great lost bands of Manchester, Audioweb, have reformed.

20 years have passed since our debut album.

If I look at the music to come out of Manchester during those 20 years it still doesn’t reflect the city I know. We soaked up every influence we heard and created something that we thought was the most natural thing in the world. We assumed that everyone would just get it because we did.

By ’99 it just got too tiring. Lumped into a scene that we had no relevance to, we called it a day. Martin became a DJ. I know Sean and Rob then went off to do Badly Drawn Boy but 2 years later Ian Brown got me and Sean in to cover rhythm section duties for him for the Spheres tour and the recording of Solarised. Sean went back to work with Damon and I stayed for ten years till Ian reformed the Roses, recording, touring everywhere, learning from the best.

We still all met up a couple of times a year when Sean was over and talked about it all. What went right, what went wrong. Then a couple of years back Martin got ill and for me that was it. No way should it have ended in a rainy field in fucking Leeds. The talk then got serious. Plans were starting to be made.

On Wednesday 15th June our debut album came out in digital format for the first time and it’s almost more relevant now than it was then. It suits the internet. It’s an album that can be re-found and rediscovered by anyone anywhere. We don’t have to worry about explaining it. We don’t have to get the latest trendy remixers in. We don’t have to be anything but us. We want to play. We want to make music. We want to groove and make people dance again. We have things to say that we feel aren’t being discussed. We’re in a country in disarray and we’re not happy about it. So that’s what we’re going to do, make some noise.

The first part of the jigsaw was Ian and the Roses coming good on a promise they made us 20 years ago and letting us support them at The Etihad. Now we plan on taking the Audioweb sound back out there starting with a tour this November, calling at Newcastle, Leeds, London and a hometown show at Sound Control on November 12th. We’ll also be at the Shiiine On Weekender on the 13th.

We know there’s people out there that get it. That’s why the most important band from Manchester let us support them. The guys that made Fools Gold. A tune that mixed influences far beyond what anybody else seems to do. They get it. Others will again.

We never shut the door on Audioweb but at the turn of the century we felt we didn’t fit in anywhere. Too groovy for lad rock and too rocky for dance purists. The press pidgeoned us in the wrong hole if they took interest at all. Our concept of following in the multicultural steps of bands like the clash, the specials and massive attack seemingly losing out to never ending britpop. We retreated but we didn’t surrender.

Time a run, and before you know it 17 years has passed. In that time we’d meet up, drink, talk & laugh about the old days and promise each other that we would all do something again.. Then the following year we’d do the same thing all over again. But luckily for us Ian Brown is a man who doesn’t forget. We were meant to do shows with him 20 years ago, and because of one thing or another it never happened. Ian told Maxi that if ever an opportunity would arise he would get us on a Stone Roses bill, and that happened on 18th June 2016 at the Etihad Stadium.