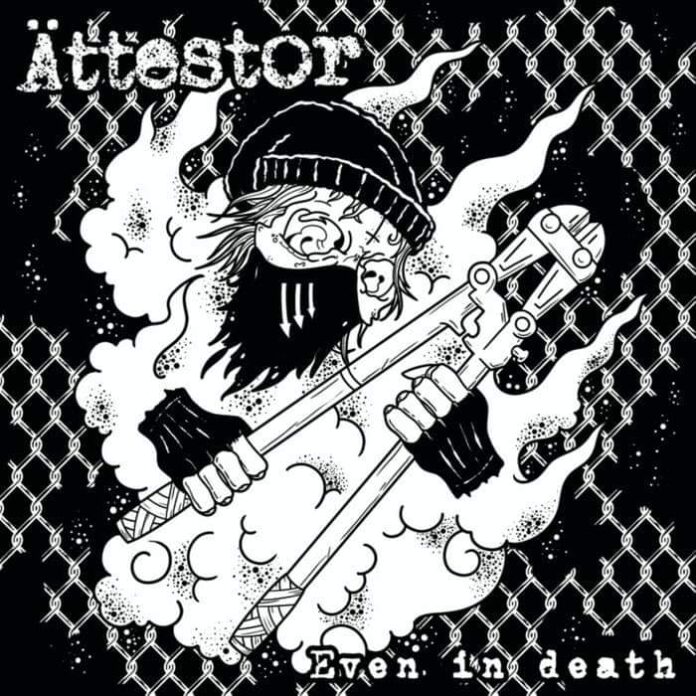 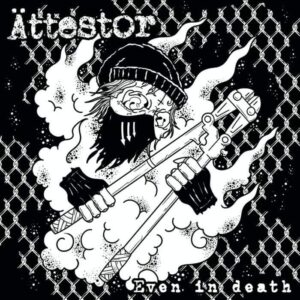 The much awaited Attestör album is a whirlwind of fast shouty DIY punk with a nod to Boston which will equally please fans of hardcore and D-beat. Nathan Brown reviews.

Attestör play straight up shouty shouty hardcore thrash with very little in the way of frills. But when you have fast riffs and lots of hooks you don’t need frills to get your thrills.

The guitar is overdriven and distorted to the point of fury. Toms sound like heavy bombs dropping and snare fills rattle like machine guns. The bass rumbles like a tank. This, along with some of the riffage, provides a similar aesthetic to Northern brutalists War All The Time. Darren is shouting into the abyss, you can just hear him above the apocalyptic whirlwind of guitar, bass and pounding drums. He comes across as a brutish shouting angry bloke (although if you meet Darren that isn’t him at all).  A bit like Drop Dead.

There is also a passing resemblence to the holy trinity of West Country hardcore: Spite, Ripcord and Violent Arrest. Like those bands, Attestör draw heavily on the better parts of the classic Boston hardcore sound of Siege and SSD but they bring in the intensity of powerful guitar-driven bands like Wolfbrigade, Disfear and Poison Idea.

Attestör’s world is fairly bleak, reflecting reality. A lot of personal demons are exorcised, or perhaps placated. This includes an honest appraisal of addiction: “Just the one. What’s the harm. Nothing to be done. Telling myself it’s the last one but really we know I’ve only just begun.” A chilling tale of what happens when these things aren’t dealt with and get too much in The Lowest Point is intoned in the chorus: “Put The Noose Around”.

There’s a few more outwardly political lyrics as well. Tory bullshit media comes in for a verbal kicking, as does the capitalist dream. Ever since Discharge mastered the art, some hardcore punk songs have managed to distill complicated issues into a few words without losing nuance, horror or humour. Attestor tap this haiku vein to great effect. e.g. “Luck of the draw whether you are born the household pet or the supermarket package” (Pet or Plate).

Proud Boys perfectly sums up and ridicules pathetic far right bullies “I’m a lost boy and I need to feel Proud. Fucking Proud. Mummy didn’t love me And I never had any real friends, So I joined a racist boys gang and can bully anything I don’t understand”.

This is not an epic album, with 13 songs in 16 minutes but none of the tunes feels too short. You’re left wanting more which means listening to it again. That’s how the best records work

Attestör chose wisely with their choice of cover, uncredited on the sleeve. The Partisans’ Killing Machine is the right tempo and character for the Attestör sound. It’s easy to forget that back when they first hit the world The Partisans were one of the fastest bands punk rock had churned out to date, at least on these shores.

The package is finished off with samples to emphasise the point of songs and some nice cover art. On the strength of listening to the album for review I have ordered the vinyl.  There are only 300 copies available and I predict they will fly out as this much awaited release was stuck in that damned pressing plant queue for way too long.