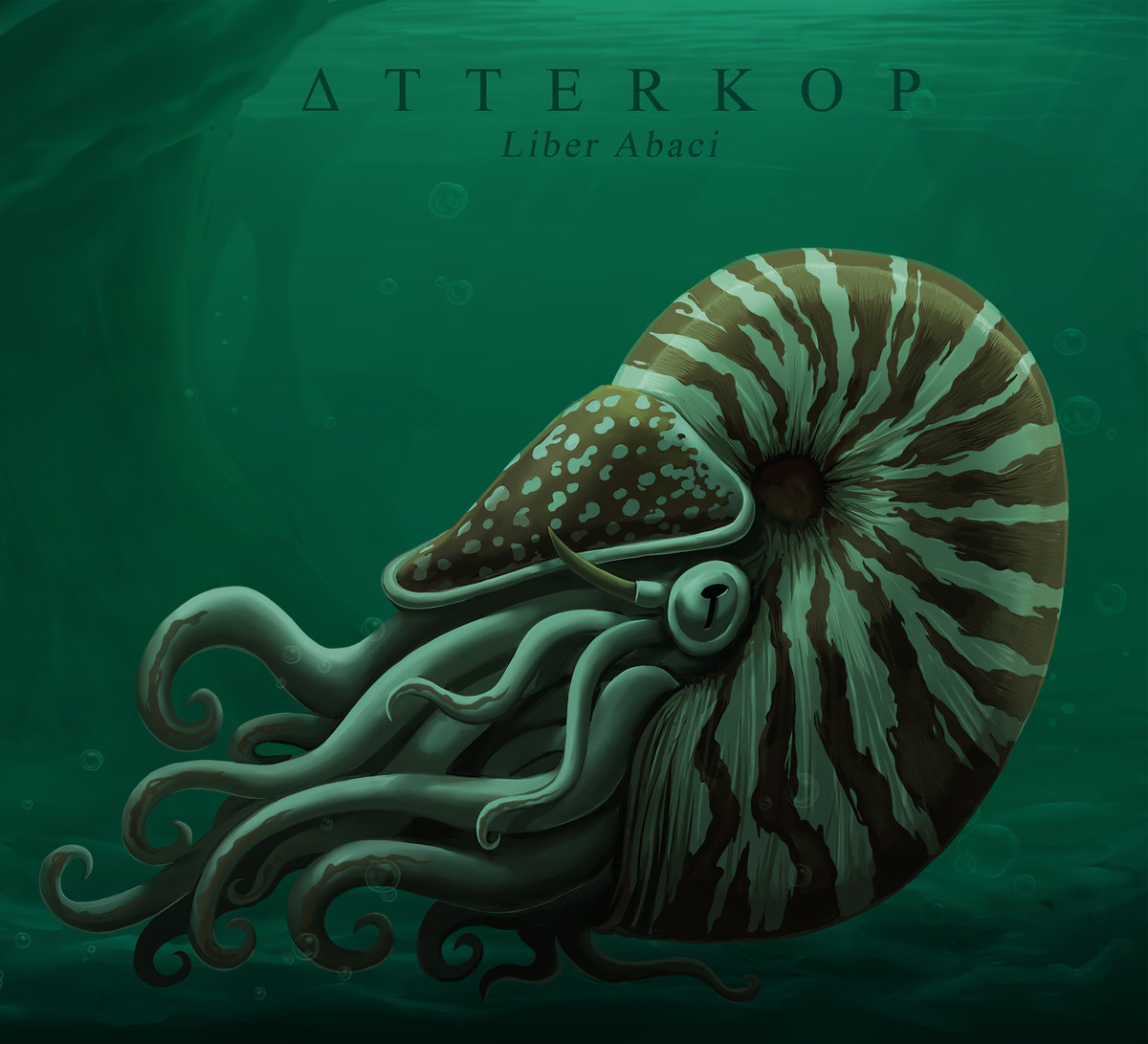 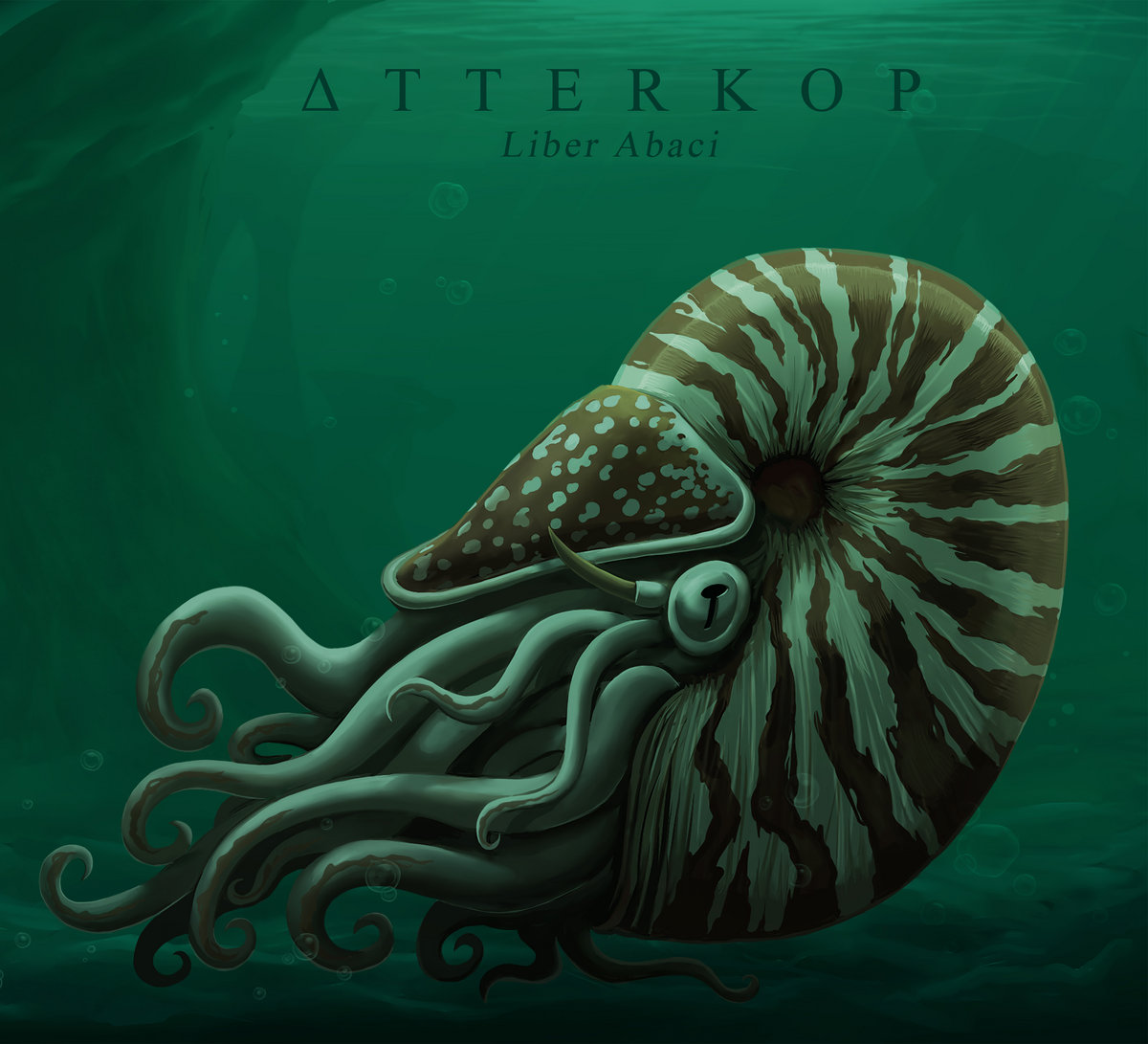 The Bristol punk-ska-dub outfit scream a political punch with their latest offering. It’s ska, but not to be filed with Don Drummond says LTW’s Nathan Brown.

I had the pleasure, along with a bunch of mates, of seeing Atterkop as this new album was released towards the end of September. On seeing the cover, one of my somewhat inebriated friends said “What the fuck is that supposed to be?”. “A Nautilus, by the looks of it”, says I.  The cover picture (above) is what I would call “proper” art.  “What the fuck is a Nautilus?”, “It’s a sea creature that’s like a living dinosaur”. He then went on to slur his way through a rant about how he would never buy a record on the basis on THAT cover.  Luckily for Atterkop, I don’t think they are looking to flog their music on the basis of the cover through an outlet like HMV.  As a DIY touring band, they are more likely to be selling directly to people who have caught their high energy live gigs and know their name.

“And what does the title mean?”  came the next question. I was stumped. So I turned to that font of all knowledge – Wikipedia – according to which Liber Abaci (published in 1202AD, also spelled as Liber Abbaci) is a historic book on arithmetic by Leonardo of Pisa, known later by his nickname Fibonacci. Liber Abaci was among the first Western books to describe Hindu-Arabic numbers traditionally described as “Arabic Numerals”.  Well you learn something everyday!  I thought it was just a play on words starting with someobody in the back of the van talking about Liberace, who, according to the self same wikipedia, was the highest-paid entertainer in the world at the height of his fame. Now, back to Liber Abaci.  Arabic numerals are those numbers that we use every day, and given some of the subject matter on the LP I would hazard a guess that Atterkop pointing to the fact that peoples of Europe and the Middle Easte have a long history of trading, mingling and borrowing from each other’s cultures. Now I had actually heard of Fibonacci.  Those of you who listened during maths at school will be aware of Fibonacci numbers, which contain something called the golden ratio.  You still with me?  These numbers can be used to create a spiral.  The shape of this spiral pops up sometimes in nature, for instance in the shell of a Nautilus.   Now the reason for the Nautilus on the cover is clear….and it also clear we are dealing with some fairly intelligent folk.

Onto the music.  The LP opens with a melodic little piece that combines mandolin-esque guitar with some jazzy drumming to sound like the theme to a Cold war spy thriller.  It demonstrates the abundant musical ability this band possesses.  Building up to a crescendo, the first song proper kicks in and delivers speedy heavy hardcore riffs with vocals from the land of Sick Of It All or Ignite before it flips into fast paced ska with a ranting-cum-hip-hop vocal style layered over the top.  This sets the general pattern for the rest of the album.  This is ska and hardcore, more than the once ubiquitous ska-punk, so if you are expecting what became known as ska-core, this ain’t it.  That all became a bit clean and nice and pop-punk and MTV and boy-meets-girl for middle class kids.  There is another busy scene that combines ska with punk but is the street level politics (and general grimey-ness) of anarcho-punk, perhaps best exemplified by Autonomads in this country.

Listening through, we are treated to occasional snatches of well played 70s influenced roots/dub reggae, interpsersed here and there with some nice horns (quite literally borrowed from Citizen Fish as it is their brass section on the recording) and organ.

“Forgotten found” is something of a a rollercoaster – it starts off like some kind of Eastern European folk inspired fairground, builds up into a Hardcore stormer then totally drops into a punk-dub tune before we lift off again with the hardcore, then we drop back to the dub, then the hardcore is back.  While most of the transitions between tempos or styles work well, in particular this song, on first listening, was a bit disconcerting.  Dub – good. Ska – good. Hardcore – good. Playing all 3 in one song? Takes a bit of getting used to.   “Hope will Float” stands out with an angry matter of fact vocal style that is firmly in the spirit of Flux of Pink Indians, Crass and early Chumbawamba.  Dischordant and minor chords litter the musical landscape which combine with some weird tempo changes to give the album a somewhat apocalyptic or claustrophobic feel.  But those horns I mentioned – particuarly on “Safer Spaces” – lift the mood.

It really is a mixed bag.  We have bouncy ska breaks, we have frenetic hardcore that emulates Propagandhi, but also Scottish crust purveyors Scatha/Sedition.  There are some soaring, heavy leads that conjure up Tony Iommi.  Moments of the soundscape remind me of Bad Brains in their later years, which makes sense as they were the originators of fast & furious hardcore combined with heavy heavy roots and dub. And don’t forget the sinister circus time signatures – and just before the recent spate of clown attacks, but which came first?  “Your honour, it was listening to Atterkop what made me do it”.

Lyrically Atterkop veer between personal and political, but then didn’t someone say personal is political?   To summarise what I find myself nodding in agreement to – we live in an inhumane system destroying planet and people, fascism is a wrong that should be challenged at every turn but we also have issues at “scene” level to tackle. To give you a flavour I picked out a few prime examples.

“Every Boy Every Girl” is pretty topical given the current zenith of gender politics.  Atterkop attack the “binary” gender designation that society attempts to reinforce. Their answer is unity – “Abolish all labels, all as one”.  Humanity is cast as the agent of its own demise on “Trees Will Fall” – unfortunately not just it’s own but everything else trying to live on this dusty rock. In “Safer Spaces” there is a plea for less macho shit and a friendly atmosphere at gigs.  Let’s protect the difference, let the punk scene be a space that welcomes all, let people be themselves.  Fuck the macho, shirts off, pricks who try and dominate the dance floor and ruin everyone else’s fun.   The general message I got from this pair of songs was that there is little point trying to change the world if we can’t change our own music scene.  Unfortunately they ain’t the first to make this observation.  We have work to do.

“Hope will Float” concerns the plight of refugees – questioning “How many lives are lost in order to make profit?” with the grim observation summing up a familiar story from this summer  “Dreams will float, hope may not, washed up lives pepper the shores”.  “Forgotten, Found” goes one step further and questions the whole concept of borders. The sea, the air, insects, animals, plant seeds – they all cross borders, why shouldn’t people?

Antifascists through and through, “Picket Fence” is where Atterkop nail their colours to the aforementioned fence.  There is a saying “Get off the fence” regarding those who claim to be “non political” and share a stage with fascists – make your mind up, stop sittin’ on the fence.  Understand?

“Red Lines” focuses on the inane spectacle the media perpetrates to keep us distracted. I heard this 2 days after the top news story on a national radio station was about Mary Berry and British bloody Bake Off while barrel bombs being dropped on civilians in Syria was relegated to 5th item.   Atterkop are right to be fucking angry.  So should you be!

If you want to get some angry political ska-punk-dub then you can find it on their bandcamp page.