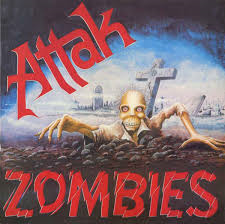 It’s sad, but not unfair, to say that New Mills band Attak were overshadowed by their neighbours Blitz in the 80s UK Punk stakes. While Blitz came close to cracking the national charts before dramatically imploding just as it seemed as fame was about to come knocking on their door, Attak had to be content with Indie chart success, like a Punk Rock Mini-Me to their No Future label-mates.

They formed as a quintet 1980 (singer Saleem left after they cut Blue Patrol) and went under a number of different names such as the P45s until they settled on Attak, the inspiration coming from Blitz and their “All Out Attack” EP. There were links between the two outfits beyond the name and geography, with drummer Lindsay McLennan being the sister of Blitz’s bass player Mackie (real name Neil) and singer/guitarist Gary fronted a later line up of the band on the “Killing Dream” album. Bass player Chad completed the original Attak line up and all this may have helped with the signing to No Future where Blitz were already firmly ensconced as a leading light in their roster.

Attak were similar in sound too: I believe this kind of thing used to be termed “Brickwall Punk”, raw, semi-shouted vocals and a frantic pace. They first made their mark on the No Future compilation Country Fit For Heroes with Blue Patrol (included here), a mid-paced anthemic police brutality number with an insistent bass run and kick-a-long drums setting it apart. The good response to this track led to the Today’s Generation EP in 1982, a whole heap of bruising Punk Rock fun with a memorable hook-line. Yes, very much in the Blitz mode, but none the worse for it. Another single Murder In the Subway followed in the same year, a typical break-neck UK82 thrill-ride/shout-a-long, but not without charm. Finally in 1983 Attak released their one and only album Zombies.

1983 was very much a downbeat year for Punk in Britain – by this time Hardcore bands from the States began to make their presence felt on the previously reticent UK Scene and for many they seemed to represent a better re-stating of the true Punk ethic than outfits like The Exploited. No Future itself would find the going tough and this would be the last album of new material the label would release. Attak’s Zombies made the Independent Top 20 and sold relatively well, but the shrinking UK Punk scene and the apathy that appeared to have engulfed it at the time, meant the band would split less than a year afterwards.

By the time of this album Attak had added lead guitarist Woody and taken in some metal influences to try and develop their sound away from stereotypical early 80s Punk. Indeed the LP cover definitely has a Metal/Rock aesthetic about it, the front sleeve featuring an illustration that could have easily been have been wrapped around some kind of Sabbath-leaning Prog band’s platter 10 years or so earlier. Plenty of Goth in the song titles like Demon and Face The Slayer too. First song, the enigmatically entitled DAGA, splits into two parts (D-A-G-A being the chord sequence for the song) being led by a loping beat and plodding bass-line. There’s even a bit of Buzzcocks in the Pop-ish guitar solo, very appealling. These are the first signs that the LP would be a slight step in a different direction to the singles.

The shadow of Blitz may have slightly lifted by this time but it was replaced by Motorhead’s: about half of this LP reeks of Lemmy’s band circa Ace Of Spades (Play The Ace is probably the most blatant cop). It’s not unpleasant but where the band really fly is when they manage to rise above their influences like on Young And Proud, (a bit clichéd lyrically, yes, but it’s heartfelt) with a killer chorus and ringing guitar motif winning the day. Big Brother (here in both album and “Oi! Oi! That’s Yer Lot” guises) also combines Attak staples of thundering bass runs, frantic drums and hoarse singing to good effect. See You In Hell is a fun growl-fest and of the more Metal-inclined numbers Trail Of Terror is most effective. We find Attak caught between two stools on Zombies in effect, but if they had followed up this record it would have probably been as an out and out Metal band. That was clearly the direction they were moving in.

Attak may not have been at the pinnacle of the UK82 scene but their singles were loud, fast and enjoyable and the LP showcased some new ideas that were ultimately never followed up. Though the production on the album could have had a bit more guts, here’s a good chance to hear one of Punk’s later lesser lights try and develop away from their original base into something more progressive and interesting. While this is not a brilliant album, it is a good one given the timeframe (the singles and compilation tracks added to this collection’s attractiveness) and shows some promise which sadly was never to be followed up.