The Remaining Tickets On Sale Now from the ATP festival’s website.

Two special festival events at Camber Sands this November have been announced as the last ever All Tomorrow’s Parties holiday camp festivals in the UK. The two consecutive weekends under the title The End Of An Era feature amazing line-ups bringing back past ATP curators and fan favourites. Weekend 1 is now completely sold out, making Weekend 2 the last chance fans will have to attend this very special festival in it’s original holiday camp home.

Weekend 2 running from November 29th – December 1st will be curated by ATP and Loop, who released three mind-blowing albums in the late 1980s highlighted by 1990’s A Gilded Eternity. ATP are very pleased to invite them to collaborate with us on the line-up. Following the previous announcement of co-headliners Slint and Mogwai, ATP can now announce more new additions…

SHELLAC curated one of ATP’s earliest events over 10 years ago, and returned in 2012 to curate again to celebrate their 20th anniversary as a band. Shellac and ATP’s long relationship has often seen them called the festival’s House Band, and it gives us great pleasure to bring them back to play this final holiday camp event. Shellac Of North America are Steve Albini, Bob Weston and Todd Trainer.

Also added today are: a very rare UK performance from THE DISMEMBERMENT PLAN who have yet to play these shores since their reformation in 2011, the legendary THE MAGIC BAND, an equally rare performance from New York no-wavers UT picked by Loop, a solo show from MICK TURNER of ATP favourites Dirty Three and finally newcomers to ATP, France’s LES COLETTES.

The remaining tickets for the event are on sale now via ATPFestival.com – with some more exciting names still to be added to the line-up. So far the line-up looks like this…

Tickets for ATP’s End Of An Era Part 2 including festival entry + accommodation are on sale now priced at £190 per person via www.atpfestival.com 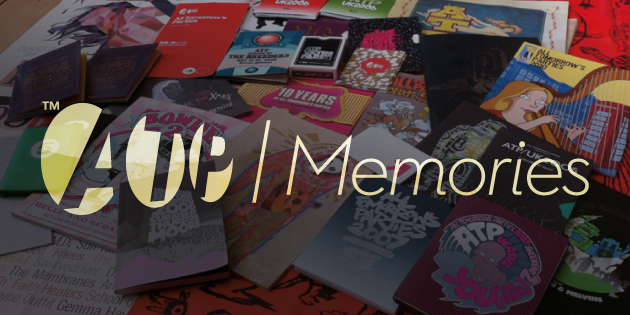 To coincide with the final UK holiday camp festivals this November, today ATP are very excited to launch a new interactive archive of the All Tomorrow’s Parties music festivals named ATP Memories.

The site features a complete history of the world famous festival events built around the memories of the fans and artists that made them happen. Featuring programme extracts, line-up information, audio playlists, fan shot galleries, and much more, ATP are inviting past attendees and artists to submit their memories and photos to the site.

As part of the launch, ATP’s Barry Hogan interviewed Stuart Braithwaite of Mogwai both about his band’s connections to past ATP events and about their forthcoming appearance at the End Of An Era Part 2 festival in November.