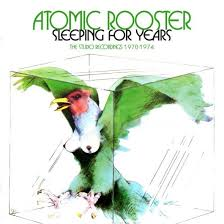 Sleeping For Years, The Studio Recordings

The entire studio recordings from 1970 to 1974 of Atomic Rooster, with five full albums, different cuts that appeared on US and German versions of these records plus associated single tracks…..Ian Canty looks at a band who emerged from uncertain beginnings to encompasses Prog, Heavy Metal before going back to their Soul roots….

Atomic Rooster formed when organist Vincent Crane and drummer Carl Palmer made the break from the Crazy World Of Arthur Brown. Crane had bowed out of a US tour with Brown, suffering from mental illness that would blight his life until he sadly committed suicide in 1989. After Crane had sufficiently recovered, he and Palmer mooted a collaboration with ex-Rolling Stone Brian Jones, but his death in the summer of 1969 put paid to that. The duo instead pulled in vocalist/bassist Nick Graham and the newly christened Atomic Rooster set about imposing themselves on the live London scene. With their guitar-less line up, they soon made waves with Graham’s powerful vocals complimenting the adept playing of Crane and Palmer.

B&C Records, a spin off of Reggae label Trojan, signed the band up in the New Year and they set about recording their first album. This intial Atomic Rooster platter was quickly recorded and released in February 1970. Its mix of Folk totems (Graham’s talent on the flute is often pressed into service), dark lyrical concerns, Prog meandering and the Rhythm and Blues smarts they all learnt in the 60s, came together to produce the archetypal 1970 long playing record. Crane had been a fan of Graham Bond from way back and it shows as he pushes the Hammond and piano to its limits. The lack of a guitar is not really noticed due to his work, the busy drums and frantic bass runs, with the singing alternately between soulful bluster and Bob Plant style screaming.

Procul Harum-style ballad Banstead showed their roots in Psychedelia that never quite left the band and the upbeat S.L.Y. has some marvellous keyboard flourishes with the only guitar playing on the LP proper (Graham doubled up yet again). The reflective and downbeat Winter is a fine example of Folk-influenced Prog with Decline and Fall showing some early Jazz and Funk leanings. A couple of US versions are appended to this disc, for some reason Atomic Rooster’s LPs were always being re-jigged for foreign territories, but never fear as Esoteric have added them all on here after the relevant LP.

Soon after recording the album Nick Graham left the band. Just before Palmer’s departure towards supergroup super-stardom with ELP, next through what would turn out to be the Atomic Rooster revolving door would be ex-Attack and Andromeda guitarist/singer John Du Cann. His first act as a member of the band would be to overdub some guitar heroics a few of the debut album’s tracks for the American release.

The results of this are presented among the bonus tracks on disc one, where Du Cann pulls out all the stops in a guitar “duel” with Crane’s keyboard lines (even though they were put down on tape months before). They actually work rather well and give a totally different slant to tracks already set down. Du Cann’s past in Psych/Freakbeat acts really helps him work in a concise but explosive manner. This is particularly evident on the demo version of the single Devil’s Answer, transcending its roots in the Who’s I Can’t Explain with wild guitar injections.

Du Cann’s presence gave the band a different focus and the album that followed, Death Walks Behind You, was a classic bit of Prog-Proto-Metal. It’s a real shame that all the band members that contributed to this record are now no longer with us (Palmer had by then done his flit and Paul Hammond came in on drums), not able to hear their splendid work anew here. This album would yield their first hit single in the shape of the excellent infectious loose jam of Tomorrow Night.

They really hit their stride on this LP. The spine-tingling title track was a good start, with restive piano figures giving way to a great jam and some cool guitar stabs. Sleeping For Years signposted the Heavy Metal to come, a pleasing clatter of the drums playing off some neat organ. But there’s also a good song underneath of it all, with Du Cann’s restrained vocals working well. Vug looks back to the sound of the first album more and as to prove they were far more than mere one trick ponies, Nobody Else begins with strange backwards acapella before transforming into what could be an early precursor in New Age and then into an emotional Soul number.

This was Atomic Rooster’s finest hour, but with it and the second hit single Devil’s Answer (which made it all the way up to the UK Top Five) which followed, the seeds of destruction were unfortunately sown. Devil’s Answer was Du Cann’s work and also with the huge positive effect he had on the band’s sound, he felt bolstered. Crane for his viewpoint was wary that this newcomer was taking over his band. A struggle for power with the requisite bad feeling that inevitably accompanied it festered and a split was sure to come. Paul French arrived on vocals. Perhaps this was a slight on John’s work on the previous LP, great though it was, but French’s no-holds-barred singing style fit Rooster down to the ground.

On the outside though all looked good leading up to the band’s third LP, Crane and Du Cann clashing meant the former toned down the latter’s guitar contributions on the album, with keyboards always coming out on top. Though the evidence is clear aurally on In The Hearing Of Atomic Rooster, it still was a decent follow up to Death Walks Behind You. It may have lacked that record’s primitive blasts of energy on the whole, but had enough to recommend.

Break The Ice, despite the keyboard overlay, is pure tough Proto-HM, the queasy twists and turns of The Rock are novel and Black Snake is convincingly moody. Final track The Price is a terrific bit of work, mashing in all their influences with possibly French’s best vocal with Rooster.

Enraged at the downplaying of his contributions, Du Cann left and drummer Hammond also exited in a show of support (Ric Parnell, a temporary replacement previously, joined on a permanent basis), though also possibly uncertain about Crane’s ideas for a different musical direction. After a while French was on his way too. This left Crane to totally reshape the band for the fourth album Made In England. 60s Blues/Pop star Chris Farlowe, fresh from his work with Colosseum, came in and though more than capable of full-on Blues shouting, for the most part he displayed a lighter vocal style with AR than his predecessor. This changed heralded a shift in the music too, much more towards Funk and Soul away from Prog. In fact on this album they could credibly claim to be the forefathers of many a “crossover” act in that mode which would emerge a few decades later.

Made In England found the band, to coin a phrase, overpowered by Funk (not necessarily a bad thing). Soul legend Doris Troy provided backing vocals on a couple of songs and new guitarist Steve Bolton made his debut. The high energy Funk of Stand By Me and the very danceable Don’t Know What Went Wrong were highpoints, but the sad nature of the lyrics most notably on Time To Take My Life can only be touched by melancholy when one considers the subsequent fate of Crane. Despite the marked change in style which was a world away from most Proggers, this is still a good record. However it became the first Atomic Rooster LP not to chart in the UK, despite a brief showing stateside.

Undeterred, Rooster pressed on. Nice And Greasy was released in 1973 and clad in a pretty horrible sleeve (in fact all their sleeve art was uniformly awful). Again the contents were R & B soaked. This time round Johnny Mandala nee Goodsall was the only change, replacing Bolton on guitar. Ballad Can’t Find A Reason was an oddity in their canon, but Farlowe was in his element here and the horns add to the Soul feel. Ear In The Snow follows a similar percussion heavy path to Magic Bus and Mandala’s speedy Funk riffing stand out on Goodbye Planet Earth. Blues Rocker What You Gonna Do? and the otherworldly piano of Moods are bonus tracks that appeared on the US version.

After this album everyone but Crane exited once more, with an unexceptional 1974 single Tell Your Story being the reshuffled band’s only output (though the wordy flipside O.D. was much better). After that flopped Atomic Rooster disappeared for a while, eventually being reactivated in the 80s. Crane also went onto work in musical theatre at the Old Vic and with the band Dexys Midnight Runners on their Don’t Stand Me Down LP.

Though they went through members like a pre-Punk version of the Fall and also changed musical direction at the drop of a hat, Atomic Rooster were highly influential on a whole raft of bands that came after. Indeed their imagery and lyrical obsessions would mirror a great many of Heavy Metal bands later on, even if their keyboard driven sound wasn’t quite as full on as Black Sabbath.

This new and exhaustive boxset of their original lifespan clearly shows what great talent was at work here. Death Walks Behind was in my opinion their best LP and found the perfect dovetail between Vincent Crane’s dexterous keyboard flights and John Du Cann’s superior guitar outbursts – it still sounds fresh today. The two singles were classics and it is interesting to speculate how that line up would have developed had it stayed together. Though the later versions of the band often produced listenable and intriguing material, they never truly bettered this AR aggregation.

Having said that, this compilation is everything an Atomic Rooster fan could wish for, with the story being told via an excellent Malcolm Dome sleeve-note with band members Paul French and Chris Farlowe providing insights. Newcomers may be shocked to find how contemporary Atomic Rooster sound at times and they are ripe for rediscovery. Pleasingly they went at everything they did in a full-bloodied way and kept evolving throughout their lifespan, no half measures. They were truly progressive. Vincent Crane, John Du Cann and Paul Hammond may be gone now, but they and their bandmates left a lasting legacy to be proud of, which you can easily access now thanks to this new boxset.