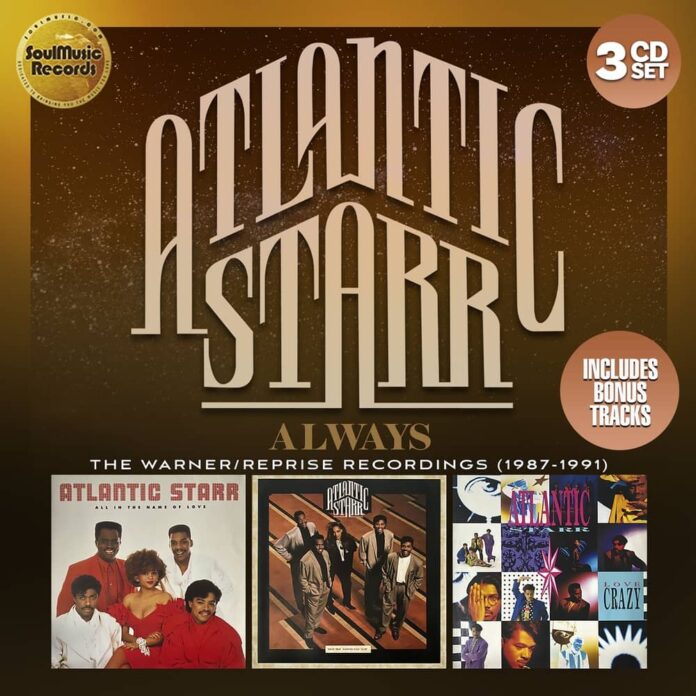 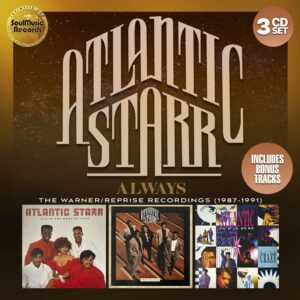 New boxset containing the three albums that soul/pop band Atlantic Starr made for Warner/Reprise from 1987 to 1991. The set is named after their international smash hit and aside from the LPs, there are also eight bonus tracks included. Ian Canty examines what went down on the other side of the pond…

Though Atlantic Starr had a long history that went back to the mid-1970s, they were a very different beast to their original incarnation by the time of the first album featured here, All In The Name Of Love. Starting out as a nine-piece funk/soul band from White Plains, New York, they had slimmed down to the core of the original members the Lewis brothers David, Wayne and Jonathan and percussionist Joey Phillips, plus a relative newcomer in vocalist Barbara Weathers.

After years of struggling to get a foothold outside of the r&b charts, this lineup had scored their biggest pop success so far with their previous LP, As The Band Turns and the Secret Lovers single, which reached the top ten in America and the UK. A&M Records, their label, dropped the ball with the band by deciding not to promote Secret Lovers and also by opting not to extend Atlantic Starr’s recording contract. When the single slowly worked its way up the charts on the back of the band’s own hard work, Warner Bros saw their potential and swooped in to sign them up.

As it turned out, Atlantic Starr even managed to top that triumph with their debut 7 inch for their new label. Always was a huge success, which reached the top spot in America and Canada and only just missed out in the UK too, rising to number three here. Today it sounds like pretty much a textbook mid-1980s soul creamy ballad, with Weathers and Wayne Lewis combining admirably. It almost certainly helped the evident chemistry displayed a great deal that the pair were a romantic item at the time.

The parent album All In The Name Of Love lodged itself in the US top twenty making number 17, just a place below the previous LP. This is a decent collection, with a solid base in the electrofunk sound that was prevalent in the US at the time. It is presented here in its “international” CD version, which adds the bright and danceable film soundtrack number Armed And Dangerous, which charted at 86 in the US r&b listings.

Atlantic Starr at this time were a finely tuned unit that worked well off female/male vocals, as a pairing or individually when needs suited. Barry White’s arranger Gene Page was also brought in and contributed greatly to the lush sonic landscape. One Lover At A Time, which was a minor US and UK hit as the follow up to Always, has a hip hop rhythmic bass which showed a willingness to adapt their approach in the face of the changing times. This is a good example of the “modern” soul sound which should have fared better. Following track You Belong To Me has a nice and snappy feel and sweet-voiced ballad Don’t Take Me For Granted is utterly charming.

Let The Sun In is another good duet, but All In The Name Of Love does tend to fade out in a blitz of slowies, where something with a little more impact could have broken up the slightly sleepy feeling of the album’s end. Having said that, the final track Interlude is beautifully light and jazzy, though only about a minute and a half long. This disc ends with a couple of extended mixes of album tracks One Lover At A Time and Let The Sun In, plus the single version of the title track and a short edit of Always.

After the exposure from that hit single, Barbara Weathers opted for a solo career before the year was out and Porscha Martin was her replacement for the 1988 LP We’re Movin’ Up. Actually, this signified a crucial change for the band as both Porscha and Rachel Oliver, who sang on 1991’s Love Crazy, the last album of this set, were not made full band members, only “featured vocalists” on a wage. This couldn’t have encouraged the singers to stay and probably didn’t help Atlantic Starr much in the long run. Joey Phillips also exited at around the same time as Weathers. Feeling the pinch by 1988 as the then-current flavour of the season new jack swing and hip hop made big inroads on the US r&b circuit, the constant changes didn’t do much to help a band who already struggled to put over a strong visual identity fans could latch on to.

Even so, We’re Movin’ Up’s lived up to the assertive title. Bring It Back Home Again was unlucky to make no impact as a single as it is a groovy piece of feelgood electro dance and the two extended mixes that are part of the bonuses on this disc are well put together too. The title track is a zippy dance number and they even do a creditable job turning their hand to reggae on Love Ain’t Fair.

Porscha gets a chance to show what she is all about on the funky Don’t Start The Fire and My First Love, which hit the top of the r&b charts whilst not even making a ripple on Billboard. This was a deep and soulful number with much promise, so its failure in the pop charts is a bit of a mystery. We get 7 inch and extended versions as a bonus too. The playful duet of Porscha and Wayne Lewis I’m In Love With You is a highlight, but a generally pleasing record didn’t have anything likely to repeat the success of Always aboard.

Atlantic Starr had been moved over to the Reprise imprint by the time of Love Crazy which emerged three years later in 1991. Here they gamely attempted to keep up with the changing times, with Oliver at one point told to sing like Mary J. Blige, the rising star of r&b swing. Opening track I Can’t Wait even has a rap from MC Smooth, as well as what passed as a state of the art production sound in the early 1990s. It is a good, catchy effort with Wayne Lewis’ voice shining brightly. Rachel Oliver makes a composed and sultry debut on If You Knew What’s Good For You, even if the sleeve note states she wasn’t very comfortable with the hip hop stylings of the song.

After a couple of ballads, Come Again kicks in the modern dance gimmicks and is full of good energy, with Wayne Lewis trying his hand at rapping this time round. The smooth, sunny title track was the first single from the LP and made the lower end of the US charts and seven in the r&b listings. However, it was just a prelude to Masterpiece, a Kenny Nolan number sung delicately by David Lewis, which took the band right back into the top five in America.

My Special Lover is a cool electro tune and the album ends on a high note with Unconditional Love, where Oliver excels in tandem with David Lewis on a neat gospel-infused tune. The irony is that both are now practising ministers. This is the only disc of the three not to have any bonus tracks, a shame as a dance mix or two of the more upbeat numbers featured on this LP would have been nice.

Despite Masterpiece’s success, the album didn’t follow it up the charts, only reaching spots below the generally underwhelming reception for We’re Movin’ Up in the US charts. Oliver opted to move on and it would be another three years before the band followed Love Crazy up in 1994 with Time. Aisha Tanner provided the female vocals for this record, though Oliver returned for 1999’s Legacy album. The band’s most recent collection, Metamorphosis, featured new vocalists Melissa Pierce and L’john Epps.

Always The Warner/Reprise Recordings does cover Atlantic Starr at the peak of their late 80’s prime. They certainly had a way with a soul ballad, albeit for me they sometimes overplayed their hand in that respect. Away from the slowies though, their attempts to update their sound were always entertaining, particularly on Love Crazy, which is my favourite of the three LPs included here. There is a satisfying quality found throughout though and each of the female vocalists shines when given the chance. Atlantic Starr certainly knew how to put together emotion-packed soul love songs and dance numbers that got the toes tapping, so despite the always-changing personnel, this set is an enjoyable ride for the most part.