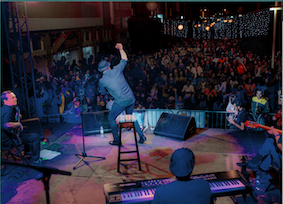 Cape Verde might be more well known as a holiday destination for its beach resorts, but every April, Praia – the capital city of Cape Verde – plays host to the Atlantic Music Expo, inviting music lovers from worldwide to see what the country has to offer in terms of Cape Verdean/Portuguese-speaking talent as well as international up-and-coming acts.

For context, Praia itself is a small city that feels more like a large village owing to its small size. Because of this, everyone pretty much knows one another and news of last-minute shows travels fast. So it’s no wonder that people know of each other’s shows and that they’re so well-attended by their fans from all over the country. Perhaps it’s also the reason why its youth use hip-hop as a tool to get their message across.

This came in the form of artists such as Manolo and Ga Da Lomba. Manolo is one of the most well-known rappers in the country, garnering his large swathe of fans to come and watch his performance in the centre of Praia for his showcase. Throughout the day there’s a buzz around his show all over town, and the anticipation builds with every hour passing, as posters of him are put up everywhere and his name is on everyone’s lips in Praia. As he performs, down on the dance floor his fans sing back to him, fingers point back with enthusiasm and rhythmic dancing, with Manolo rapping in a mixture of Dutch (as he was raised in Holland), Creole, Portuguese and English.

Describing himself as a social activist as well as an artist and rapper, American-born rapper Ga Da Lomba aggressively prowling around onstage is a spectacle in itself, almost roaring his own songs to the audience. Again, much like Manolo, there’s a buzz throughout the day and expectant fervour. Onstage, rapping in English and Portuguese Creole, he has photo backdrops of his social work in schools whilst talking about the dangers of drug addiction, from which Ga Da Lomba himself is now free after being 6 years clean.

What is unique to Cape Verdean hip-hop is these acts tend to favour guitars, drums and keyboards, rather than DJs or samples for the full live experience. Another special flavour is that theyntend to rap in various languages, the most popular being their native Creole and Portuguese, but often there’ll be some English thrown in to boot. Lyrical content can range from societal issues such as drugs to party songs about partying. Whatever the case, their fans are dedicated and loyal to their idols, repeating back every lyric, rapped with passionate aplomb.

In a last-minute addition to the festival, female rapper Nissah Barbosa is asked by Montreal group Qualite Motel to perform an impromptu set for one song to perform a remixed version of her latest single Pinga. The crowd raises their arms in approval and goes wild as they get up off their chairs, as this is a totally unexpected addition to the lineup. But it matches up well as Qualite Motel’s up-tempo electronica and samples suit the deft lyrical flow of Nissah’s style. Below the stage are some small children breakdancing along with their mums sitting on chairs in the front rows.

And the hip-hop scene is not just exclusive to stage performances either: a nightly aftershow, after the Atlantic Music Expo showcases are done and dusted, takes place in a small sized warehouse on the outskirts of Praia with local hip-hop DJs such as Danny Boy and Illspokinn performing sets to foreign delegates and locals alike, dancing away to beats well into the early hours. Though the venue is often half-empty, the music is good enough to keep everyone going to the end of the night.