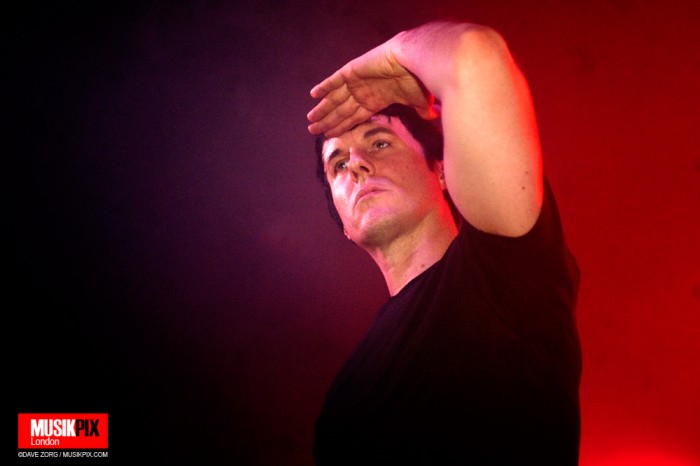 Photo above of Alec Empire and all others on this page © MUSIKPIX.

Fresh from the release of their latest, brilliant album Reset (which we reviewed here and which John spoke to Alec Empire about here) Atari Teenage Riot brought their live show to The Garage in London last week. Keith Goldhanger was lucky enough to be amongst the audience for Louder Than War where he was subjected to “some of the most extreme sounds you could hear on a Friday night out”. With thanks to MUSIKPIX for the photos.

This all began about twenty years ago for some of us.

Sleeping in a room in Berlin surrounded by boxes of vinyl that were all marked up with the words “Digital Hardcore” and finding a tiny room in a building in Potsdam, a few miles South West of the same city, either on the same week or a year or two later and experiencing that feeling at ear splitting volume of amazement that not only does this music sound like nothing we’d come across before, but something we felt the world would eventually warm to.

Between then and now we discovered (slightly late for some of us) the joys of dancing in fields until lunchtime to some friendlier, more accessible repetitive generic music whist at the same time not dismissing our Crass albums still sitting proudly at the front of our record collections.

So why isn’t this going on somewhere like Wembley bloody stadium by now? (Imagine “Collapse of History” with 90,000 screaming along…) Where are the people who go crazy over every Prodigy release ?

Where are all the club fiends who like to gorge themselves on cheap lager at the start of a weekend and would happily tap their toes to anything with a bass drum?

Where are all those crazed hip indie kids who crammed into venues to see the likes of Crystal Castles a few years ago ?

Where are all the old punk rockers we still see around London with their “Discharge” jackets, well worn tattooed faces and newly formed punk rock three chord thrash bands that still sing about throwing stuff at the police whilst shouting obscenities and supping snakebite?

And where was the bloke with the white stick and mauve Mohican … oh, there he is … back on the dance floor again. 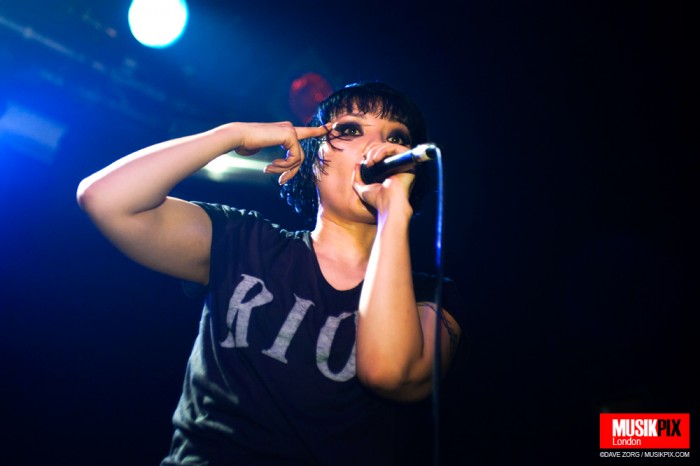 Atari Teenage Riot cover all these bases so I suppose there are a few of us in this packed crowd that tick more than one of those categories.

ATR are loud, intense, fast, furious, exciting, celebratory, they swear a bit and most important of all they manage to keep those here tonight interested non-stop for what we realise on exit has been more than a six hour marathon.

Arms in the air, counting up to four, lots of jumping up and down and no respite all evening. What starts as a polite sounding, well mixed mash of tunes from the fifth album “Reset” erupts into a chaotic glorious brutal aural attack and we notice the the longer the night goes on the louder it gets, the more insane it feels and the wish to bail out into the evening air decreases.

Ninety minutes of thrilling, banging noisy electronic beats that chop and change every ten seconds or so are what we get to begin with. Every bass drum available is being used, every snare sound is thrown around and crisp high hats panning around the venue give us the only experience of calm we feel all evening. This is Atari Teenage Riot at their best. Nic Endo, Rowdy Superstar (What a name !) and Mr Alec Empire turning the stage into a shouty keep fit class as they in turn swap from button pressing duties to finger pointing duties and shout things about government surveillance and how all the adrenalin is messing up people’s heads and so on and so on… The tunes are relentless, the thrill of it all increasing as much as the volume and I suppose a few of us are beginning to get a bit pissed as well.

As fifty per cent of the crowd don their coats to catch the dregs of London transport it’s those that remain that get to witness the event as it was always meant to be.

As difficult as it must be to recreate the feeling that some of us imagine the cool kids of capital cities across mainland Europe experience week in and week out, at least the people responsible for this night have had a good go of maintaining the soundtrack resulting in these hours in this room becoming something we’re loving the longer the assault goes on for. The cosiest we feel all evening is when D/R/U/G/S drops a Factory Floor tune and the maddest it gets is during a long spell in the evening when Alec Empire takes the decks and hits us with crashing drum and bass, gabber, nosebleed electronic Jungle soundbites that turn the event into probably one of the best punk rock evenings witnessed in this North London building for years. 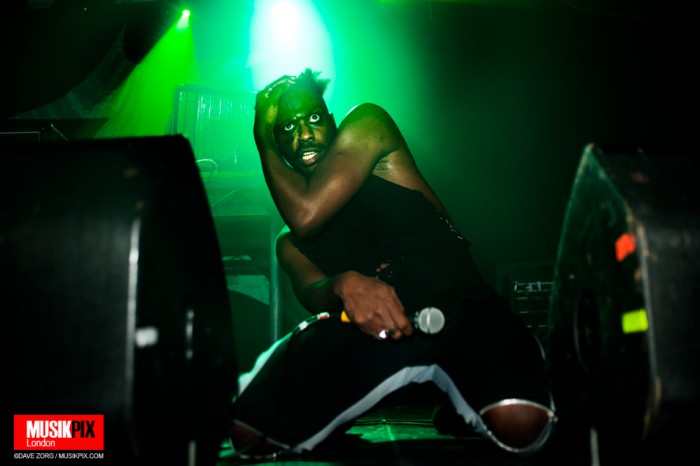 At the end of the evening we watch Alec Empire and Nic Endo back on stage twiddling knobs and filling the room with bleeps and effects that even without any audible beat still manage to have people dancing as though they have their own bass drums inserted in the heads from earlier performances. It’s not the most euphoric way to end the first three hours of the morning but it complements what’s gone earlier.

Of course we all have our own ideas of what constitutes “Punk Rock” – our own will change before the next week begins – but standing in a room for hours punching the air with delight, whether it’s to the sound coming from the stage or from the DJ decks is surely what we’ve always grown up craving. It’s a challenging evening, an entertaining evening, loud, diverse, shouty, dancey and an audience happy to indulge and be rewarded with some of the most extreme sounds you could hear on a Friday night out.

There’s a chance you missed it.

With thanks to MUSIKPIX for the photos.