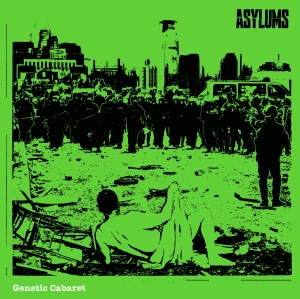 Album number three by DIY boys Asylums is a big leap forward for the Southend quartet, especially when they get the heavyweight legendary recording engineer Steve Albini (Nirvana, PJ Harvey, Pixies) on board to crank up their Britpop soaked grunge gems. Wayne Carey has a blast.

“Genetic Cabaret was written during the most turbulent time I’ve ever experienced socially and politically in the UK” says frontman Luke Branch. “I’d stay up late every night binge watching the news and political punditry and write songs all day. During writing and rehearsals, my wife fell pregnant and the huge emotional impact of that got me thinking about the world I was bringing our child into from a new perspective. I examined political history, human biology, generational divides and emerging technology in equal measure. The resulting album feels leaner musically, harder edged and with anger and empathy in equal measures.”

Asylums have worked hard to get to this point and it shows. They are brimming with heavyweight indie anthems beefed up by the Albini sounds, as in album opener Catalogue Kids which gets the adrenalin going with the riffs and drum assault. You’re talking ‘Blurvana’ here with that heady mix of 90’s indie spliced with a grunge crossover. Platitudes cranks up the sound more with an excellent noise coming from one of the catchiest riffs I’ve heard this year. The sound is amazing and is repeated throughout on some of the later tracks. It’s indie but not as you know it.

Next tracks A Perfect Life In A Perfect World and A Town Full Of Boarded Up Windows are really well written indie grunge numbers with observationial lyrics going down, possibly describing life in their hometown during these times. A real lean into Ash territory here which is no bad thing as the hooks and melody are all intact and Steve Albini has whipped up a maelstrom of sound to compliment the Britpop angst and melody.

Moving along at pace we get the excellent Clean Money with it’s fuzz guitar and bouncing energy, followed by Who Writes Tomorrows Headlines?, a top as fuck pop grunge tune that flows along. The Distance Between Left And Right bangs out the scuzzy Steve Albini sound we all love from albums such as Seamonsters (The Wedding Present) yet this is so Asylums. They sound like they’ve pulled Britpop and grunge together by the hair and banged their fuckin heads hard enough together to make a lovely mash up.

The Miracle Age slows it all right down for a few minutes with some great vocals by Luke Branch which soon breaks into another dystopian indie grunge anthem, a building crescendo crashing to the end. Adrenaline Culture is Americana at it’s best yet has Muse like Englishness shining through. Yuppie Germs is the closest you’ll hear to a more At The Drive In like sound, a fast drum lead pounding number that packs a punch and rants about “Hippies in Saville Rows” which we all saw back in the early 90’s. One of the highlights that packs an adrenalin punch.

Title track Genetic Cabaret kicks in like a glam monster with a top riff and disjointed drums that pound and roll. It’s a stop start grunge tune that changes pace frequently and kicks in Albini style with slices of feedback and dirty sound. A belter. Dull Days is a mellow roll out, acoustic like and baring their soul that tops off an ambitious set of songs that cover mental health, life changes, hard graft and dystopia.

It’s nothing ground breaking or new, more of a nod to 90’s Britpop flirting with grunge. You can see why Steve Albini likes this stuff enough to produce and pull the strings. It’s ambitious enough to pull the audiences with the anthems on here being powerful, eccentric and engaging enough to listen over and over. A great third album that should establish them when the live circuit kicks in soon. Well worth checking out…

Asylums have also announced a headline show at The Moth Club on October 24th.