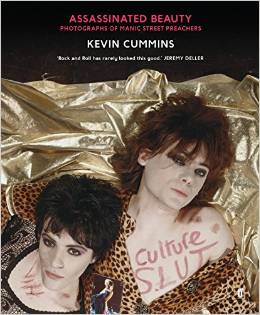 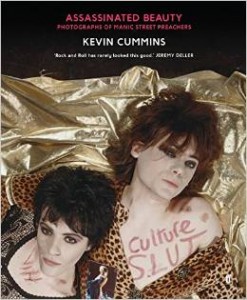 What is it about Manic Street Preachers that’s inspired not one but three glossy photography books, in the course of the last 12 years?  After all, we’re not talking about an iconic Hollywood actor, or a classic design style, or the picturesque remains of a ruined city; we’re talking about a band.  And not a band lost in mists of grainy black-and-white, like Joy Division or The Beatles – not even a truly ground-breaking band like those seminal acts.  The Manics are a long-lived, still-very-active and absurdly available rock band, much-beloved of Radio 2.

It wasn’t always so, of course.  But even when the band burst onto the music scene, all Clash-inspired spray-prints, G N’ R licks and antagonistic slogans, they were the antithesis of conventional cool. The early 90s world they imposed themselves upon was laddish, loose-fit and anti-glamour – it was a world in denial that men had ever worn eyeliner.  Perhaps it’s not surprising then that these four Welsh lads – two strong silent types and a pair of Duran Duran could-have-beens – captured the imagination of journalists like Steven Wells and Simon Price (and LTW boss John Robb who with Swells was the first person to interview them) , and photographers like Japan’s Mitch Ikeda.

One of the first people to photograph them for the NME was the very man who had immortalised Joy Division on that Hulme bridge, Kevin Cummins.  His cover shot of ‘glamour twins’ Richey Edwards and Nicky Wire, in jumble sale leopard and lace with their slogans transferred to their chests (Edwards’, the letters ‘VIH’ carved with a compass, revealed that he hadn’t quite got the hang of mirrors yet), was an early landmark in the seven-year relationship captured in Assassinated Beauty.  The book contains a series of shots from the NME session, including a lone example featuring all four band members.  Chest-bared, and valiantly sporting a heart-shaped pendant, James Dean Bradfield and his cousin Sean Moore didn’t quite make the cut.

But Cummins’ choice of title seems apt; surely their beauty is the most obvious answer to the question of ‘why the Manics?’  This was a band that had conventional good looks in Bradfield and Moore, who embodied the dark handsomeness of the younger, less tainted characters in a mafia movie. But, thanks to the presence of Edwards (or Richey James as he preferred to be known) and Wire, they were also back-combed, painted and unashamedly rock and roll – and, unlike the Mötley Crües and G N’ Rs they emulated, they were delicate and pretty.

Both before his disappearance and after it sealed his image in celluloid, commentators have tended to focus on Richey Edwards’ visual appeal.  But personally I’m more of a Wire girl, and several of Cummins’ images confirm the TV hostess radiance of his famously wide grin.  They also capture the incongruous femininity of a 6’3” man in eye-make-up, and a charity shop dress only a step away from being a 60s housecoat: Captain Sensible meets Nick Rhodes by way of Dorothy Cotton.

But, as anyone who’s ever unfurled a Marilyn poster knows, iconography is about more than beauty.  Long before Edwards’ decline and eventual disappearance the Manics exuded a resigned sadness – and they still do.  Not only that but they glorified in their ennui; they enjoyed it, they were proud of it.  In a session from the Gold Against the Soul period all four members look sombre, saddened, downcast – and strictly away from camera.  But the last shot of the set seems to say it all: as his bandmates eye the middle distance an urchin-faced Edwards sneaks a look into the lens: “Are you getting this?”

Classic images of Edwards with his torso fully branded with Monroe’s image are also reproduced, but less familiar are the candid shots of a slick-haired Bradfield sporting the same effect.  We’re also treated to shots of Edwards after the famous Japanese knives incident, when he cut his chest at a fan’s behest: blood oozing across his ribs he relaxes backstage and poses in front of a mirror, apparently with his (non-existent) stomach pulled in.

Another infamous incident from the same Bangkok trip, Edwards’ visit to a massage parlour, was also caught by Cummins’ lens.  Dressed all in white, make-up-free and wearing a crucifix earing, it seems evident that Edwards stage-managed his impending ‘loss of virtue’.  But, even if that was his intention, the naiveté, nerves and uncertainty Cummins captured weren’t put on for any camera.  Pages later, in images taken shortly before his disappearance, Edwards is suddenly much older; self-inflicted cuts and burns (deliberately?) visible as he clings to a statue like a lover.

Most of the book’s images date from before Richey Edwards’ disappearance in 1995, and remind us of the band’s extreme youth during what has become a notorious period in their history.  Bradfield in particular, unhidden by make-up or sunglasses, looks innocent and mildly anxious as he prepares to deliver The Holy Bible’s searing sentiments.  The year after Edwards disappeared from the hotel they were sharing we see him off-duty in Los Angeles; pensive, perplexed and knackered in the space of a double page spread.

I can’t speak for Kevin Cummins but the third factor that makes the Manics irresistible to me is the bond that clearly exists between them.  They were brothers in arms long before they were a band: when Edwards and Wire were away at university Bradfield, working behind the bar of a local social club, apparently sent money to ease Wire’s gambling debts.  Edwards, devoid of any musical talent, was embraced into the group in any way the others could find: driver, publicist, lyricist, ultimately guitarist – they didn’t want to do it without him.  Bradfield and Moore literally grew up together, under the former’s parents’ protective wing.

Cummins’ pictures offer irrefutable evidence of the affection between the band-members.  On an early trip to Paris, shot after shot depicts Wire and Edwards with their arms clasped around each other, their matching make-up and clothing suggesting a club to which the other members don’t belong.  But later, in photographs from the Gold Against the Soul era, it’s a peroxide blonde Bradfield that Edwards leans on, whose furrowed brow seems to betray a put-upon concern. Later, backstage in Bangkok, Bradfield sits down with his bandmate and teaches him his chords.

The book’s final images serve as a reminder of the journey this band undertook in the course of a few years, as Edwards’ disappearance prompts a shift from bold costume to the urban casualness of post-Curtis New Order.  The make-up and slogans have gone and a little extra weight has taken their place, and the remaining band-members’ eyelids look heavy.

To an extent, ‘normal service’ has gradually been resumed in the years since, and the photogenic Wire seems as true to his impulses and opinions as before.  But, as album after album demonstrates, that poignant discontent is also still in place as the band approaches the end of its third decade, and the bond between the four young Manic Street Preachers will never disappear.

Assassinated Beauty by Kevin Cummins will be published by Faber on 4 December.