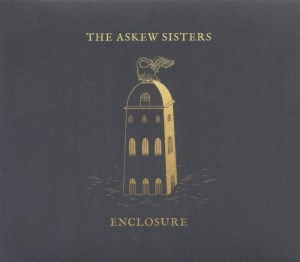 In the highly competitive field of musical duos, Hazel and Emily Askew are a folk force to be reckoned with.

They’ll be familiar to many; Hazel as part of Lady Maisery and Coven, and Emily with Alma and her own band while we can class as both BBC Radio 2 Folk Award winners as members of the Songs Of Separation project that won Best Album award in 2017, and seeing their previous work getting the thumbs up form not only the Folk press but also the broadsheets. It may have possibly overshadowed their work as a duo which re-emerges with their fourth album Enclosure; one that takes inspiration from a five-year gestation and gives them a chance to reconnect in a musical sense.

Their genetic bond manifests itself an empathetic synergy that embodies the highly overworked phrase about sisters doing it for themselves. Their fourth album together, it sees their multi-instrumental skills ensure a patchwork of sounds and also means they’re able to resist the strong temptation to pull in some guest cameos from some of their numerous musical friends.

The focus on the ten-track set is on using traditional material as the core, dissecting and tweaking – read more the inspirations and the anecdotes in their sleeve notes – adding their own spin. The deeply bowed cello on Goose & Common recalls Andrew & Julian Lloyd Webber’s Variations from an age past and follows up the haunting I Wandered By The Brookside to give an ominous introduction to Enclosure.

Georgie is as sparse and stark as the tale weaves its way accompanied by a percussive plucking. It’s typical folk tale fare; theft, a death sentence, despair and a heartbroken maiden yet with the deeper meaning of knowing/not overstepping your place… Then there’s Castle By The Sea which sees a bouncing Askew variation on the well-thumbed Lady Isabel And The Elfin Knight standard.

In contrast, come the joyfulness of the tunes sets which as always are a pleasure. The waltzing/country dance set The Zodiac shows that yes, even folk musicians can get into a groove; the folk equivalence of a Prince-styled funky zone. And if the purple one were ever to do the hornpipe…. then you can almost hear the tangible thrill of discovery in Heady Days; one of those tunes that come out of nothing before getting into your blood. The thrill of musical discovery from a duo who follow the straight line of the folk path whilst exploring the alternatives and whose empathy brings out the best in each other and their passion for folk music.