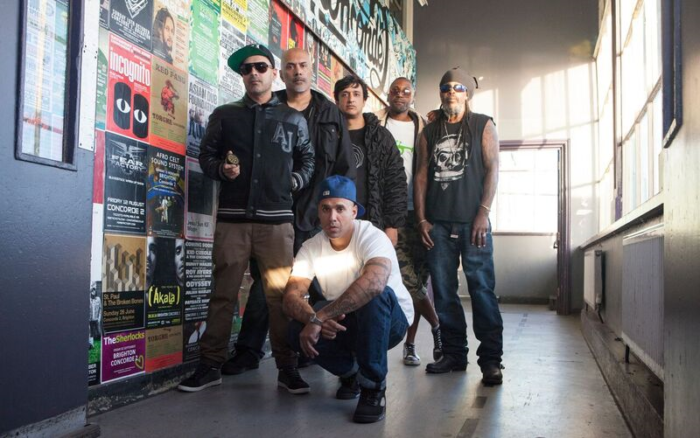 Asian Dub Foundation’s Steve Chandra Savale reflects on the band’s RAFI’s Revenge album 21 years on. LTW’s Andy Duke interviews the guitarist and co-founder of the legendary London group and discovers that the world is still catching up with this legendary album.

Although this week sees Asian Dub Foundation (ADF) celebrating the 21st anniversary of RAFI’s Revenge with a special commemorative concert in London, guitarist Steve ‘Chandrasonic’ Savale is still amazed the group happened at all. While the nation retrogressively developed a taste for champagne supernovas in the 1990s, this London quintet were looking ahead with a groundbreaking mixture of contemporary styles. With a sonic delivery that was arguably the first to merge jungle beats with live instrumentation and fast rap vocals, it’s not surprising that Savale feels that “some elements of the album sound better today”.

I’ve met Savale at a venue called Peckham Levels in South East London. It’s a former multistory car park that’s been converted into creative spaces and bars. It’s a weird and wonderful place that attracts people as diverse as London is itself. A fitting location to meet this charismatic co-founder of ADF. Although he’s only just got back from a promotional engagement on the continent, Savale is energetic and warm of spirit. He oozes a naturally cool charm that brings to mind an Asian Keith Richards circa the early-1980s right down to slightly grey locks on the sides. Slowly sipping his cocktail and reflecting on the formation of the band 25 years ago, Savale is quick to point out that ADF were in serious opposition to what was going on in this country. “Britpop was the worst thing to happen to British music. It was a counter revolution and the first time in the post-war period that was vacuous”. Whereas the UK had been at the forefront of innovation in rock ‘n’ roll, psychedelia, glam, prog, punk, goth, new wave, the new romantic movement and acid house, Savale refers to the emergence of Britpop as a time when the focus shifted to “looking backwards and rewriting Ray Davies songs”. While the guitarist is a huge fan of the music that inspired that scene (particularly Small Faces, The Creation and the early work of The Who), he is quick to stress that “nothing from the Britpop-era eclipsed what the likes of Oasis and Blur were trying to emulate”.

“There was a real disconnect between the media class and real grass roots music back then”, says Savale. “At the same time as Britpop, and particularly in the inner cities, you had this music that was blowing it up from council estates, bedrooms and playgrounds. And that was jungle”. Although ADF embraced the fast tempo beats and dub-inspired low end of jungle, they took the sound in a different direction by incorporating live guitar and bass to the proceedings and brought it to the stage. As a result, they didn’t have contemporaries or a specific scene to ally themselves with. “Although we had personal associations with the Asian Underground, musically we didn’t”, Savale reminisces. “We had that punk rock element whereas jungle was DJ orientated and high fashion. And ADF were certainly not high fashion. In fact, there was an understated and even unintended rock feel about us. And ‘rock’ was the word in ADF that dare not utter its name. Punk was ok. And there certainly was a punky reggae vibe to us”. But there was also a depth to the band’s sonic signature that managed to transcend all of these seemingly disparate influences.

“We had a pretty original sound”, recalls Savale. “We were called Asian Dub Foundation, which sounds ethnocentric, but the people in the band were hugely diverse”. In addition to coming from different faiths, they also had a very young vocalist at the helm. Deeder Zaman was only 15 when the band formed. And, growing up in Forest Gate’s Bangladeshi community, the singer brought a different perspective on music to the group. “I really experienced jungle through Deeder”, explains Savale. 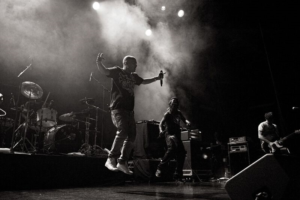 Remastered and re-released with bonus tracks, the 21st anniversary edition of RAFI’s Revenge came out on 22nd March 2019. Upon being asked what it was like to revisit the material in its updated and repackaged form, Savale is very measured. “It doesn’t feel like looking back. There are certain streams and tendencies in it that are relevant and stand up as an interesting gauntlet throw down. One thing I am proud of is that we united a lot of different musical interests”. Thanks to being embraced by the NME at the time, people from the largely guitar-based indie scene flocked to ADF’s gigs alongside jungle music fans who had never seen live bands before. “It was a wonderful interconnection”, explains Savale. And that exciting convergence of musical worlds is still felt directly in the band today. “Aktar Ahmed, the vocalist we have now, the first live band he ever saw was ADF”.

For jungle music fans, the notion of people plugging into amps and playing live alongside drum loops and samples must have felt like an alien concept at the time. Similarly, for many of the band’s followers who discovered the group via NME, Deeder’s fast paced vocals would have been difficult to decipher. “It was 100 times faster than your average American rap back then. Now the vocal tempos sound very contemporary. And that’s one of the things that’s stopped the band from dating. Even the jungle backbeat we made so much use of remains an exciting musical artefact. And one that hasn’t really been explored as much as it could have been. Ultimately, it was abandoned by that scene in favour of the more intellectually focused world of Drum & Bass. Goldie soon became the face of that musical offshoot followed by Roni Size enhancing it with a live band”. While this intermingling of fast jerky beats and live musicians had parallels with Savale’s endeavours, Size’s version “was jazzy and sophisticated whereas what ADF focused on was very rough, raw and in your face”. Savale adds, “we were going for that fast tempo and never jazzed it up or added strings”.

A highly-underrated guitarist, Savale has an interesting take about his tremendously varied and exciting approach to playing on RAFI’s Revenge. Recorded with just a cheap Strat, a tiny amp and a simple rack reverb unit, the sounds he achieved run the gamut from ethereal and sitar-esque to being a purveyor of hip hop inspired noise. “I was getting some sounds at that point that were quite unusual”, explains Savale, “and I listen back and think, fucking hell, we couldn’t do that now. There’s something about the balance of that sound (on RAFI’s Revenge) that was unique to that space and time. The way we had the live bass, and with all the drums coming off the desk and a sampler, it’s almost unrepeatable sonically”. Rather than extoll the virtues of his own contributions to the band, Savale is quick to praise the efforts of the band’s bassist. “Aniruddha Das’s bass is the bedrock of ADF’s sound. I’m glad it’s still here”, explains Savale. The ‘still here’ comment is undoubtedly a subtle reference to the nine years that his fellow founding member had temporarily left the ADF fold. On Das’s departure at the time, Savale is respectfully guarded. “Like any band, there were issues and we’d had really good innings up until that point”. Thanks to a live soundtrack recording, Das re-joined the band and the aforementioned bedrock to the group’s sonic onslaught has remained in situ ever since.

With Brexit being a hot topic in the news, discussions about ADF’s early successes in France take on an emotional resonance. Our Gallic neighbours, after all, embraced the band in a big way before the UK did. “We were spoiled. While doing some gigs with Transglobal Underground over there, we unwittingly hit a nerve. A political nerve. Le Pen was on the rise and people over there liked the internationalism of our music and oppositional vibe. And, thanks to drawing on very London and contemporary influences, we were doing interesting music. Within a couple of months, ADF were appearing on national television performing the track TH9 at teatime. Savale, leaning forward and laughing, informs me that that “this live appearance involved five million French viewers being treated to the lyrics ‘kick the fuckers in the head, why don’t you?’“. After a lengthy and emotive sigh, Savale takes a big sip from his drink and shakes his head adding that “and now the UK wants to separate from this very understanding world that put ADF on the French version of The One Show”. 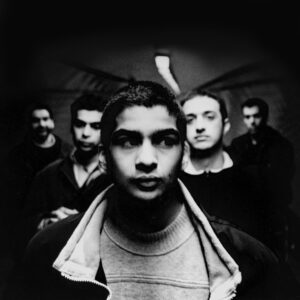 This positive reaction on the other side of the pond was followed by Primal Scream taking the London band under their wing. The band’s frontman, Bobby Gillespie, publicly described ADF as the ‘best live act in Britain’. This comment, and the extensive joint gigs they did together, helped to attract a much larger audience for Savale & Co. “Love those guys”, says Savale on Primal Scream. “They were Indie Gods at the time and likened ADF to The Specials which was fair enough given the punky reggae thing we were doing and thematically with tracks like Black and White”. This highlight from RAFI’s Revenge explored the dynamics of an interracial couple. “Deeder wrote that about his relationship”, explains Savale. “It’s very beautiful. The innocence makes it real. So heartfelt. And still quite moving”.

Remaining on the topic of cultural diversity, it’s fitting to note that photos of Steve Chandra Savale’s parents are included in a Paris-based exhibition entitled Music Migrations. In addition to featuring ADF’s work, the exhibition also examines familial connections to music. Savale explains, “they’ve even got information on the Buddy Holly and Ravi Shanker concerts that my parents went to see in London in the 1950s”. With Chandrasonic’s folks taking in a rock ‘n’ roll’s architect and a sitar maestro in close succession to each other, it’s not surprising that their son would go on to merge many different musical styles in his work with Asian Dub Foundation.

ADF will be celebrating the 21st Anniversary of RAFI’s Revenge with a special concert at Rich Mix Cinema in London on 28th March 2019.

The 21st  Anniversary CD edition of RAFI’s Revenge is out now and features the original 12 songs, plus a second CD  titled ‘Under The Influence (including Adrian Sherwood’s Selection Of Rare, Unheard & Mastered Tracks)’.

The band will returning with a new album, provisionally entitled Access Denied, in the October 2019.

Immerse yourself in all things ADF: