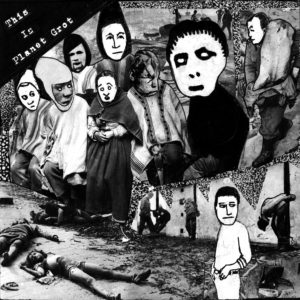 Ashley Reaks – This Is Planet Grot

Louder than War’s Ioan has his head kicked in by some lovely old school/new sound punk in the shape of Ashley Reaks.

Ashley Reaks is a London UK–based genre-hopping musician and collage artist that has led quite the eventful and colourful life that any artist worth his or her self’s salt has. Reaks abandoned academia and a promising career as a cricketer after hearing the Ramones and seeing Gee Vaucher’s artwork for anarchist punk band Crass. Reaks’ musical career is eclectic, including stints as a pop session bass player, touring the world with It Bites frontman Francis Dunnery, and having the obligatory minor hit in Japan with his own much-hyped electro-pop outfit Younger Younger 28’s.

Since then Reaks has created art and music prolifically, exhibiting his ‘disturbing and provocative’ art worldwide, from Berlin to Detroit. He’s released 10 musically-diverse albums, including  the uneasy listening of “Power Failure” and a prog-punk concept album “Compassion Fatigue (1-8)” Included in this artistic period is the album of old school punk that is “This Is Planet Grot”. Having ditched the promotion of this LP to instead collaborate with Hull poet Joe Hakim on 2015’s ‘Cultural Thrift’, followed by the snappily-titled ‘If I Hadn’t Become An Artist And Musician I Would Have Been A Serial Killer Or Killed Myself’, Reaks’ ouvre took another detour when in 2016 saw a UK tour performing his art and music show supporting LA punks The Dickies (whose singer Leonard Graves Phillips guested on the ‘Before Koresh’ album).

Finally (!!), Reaks is ready to share his album “This Is Planet Grot” out now on download here. The eponymous song starts the eleven track LP and what a massive racket they make! With lovely discordant guitar over the refrain of “this is Planet Grot” and a corker of a riff, Reaks really sets the scene and bar high with this opener. On top of this, and throughout the LP, Reaks creates ‘quiet moments’ where he sings quite loosely/freeform and against the beat and this is what makes him stand out immediately.

‘I am an addict’ has a really ballsy start and is very QOTSA. “I am an addict” is sung with a very euphoric chorus that immediately unsettles and when he sings the refrain of “addicted”, you can’t help believing him. Raw.

‘Nobody here is alive’ has a nice throbbing bass Line throughout what is a deliciously chaotic and noisy accompaniment. Yelled lyrics and discordant guitars are levelled over already immediate and panicky sounding vocals that remind this writer of a Mr K Cobain?

As the LP progresses you get more of Reak’s catchy, yet thought out and often pained lyrics, riffs and feverish vocals. This LP feels like a release of some sort.

‘Manipulator’ is bassy and has fast vocals that very much remind one of Cerebral Ballsy at their best. It has fast guitars and feels very chaotic. Absolutely brilliant.

With ‘No point at all’ the riffs just keep on coming. But it’s not just the riffs. It’s the backline guitars and the bass lines that add to the ferocity of this band. This track just descends into noise and discordant chaos that is just beautiful.

The last tracks of the album are accompanied by shouty lyrics and riffs that could strip paint off wood. Again we have loud speaker lyrics and on the final track melodic riffs that start to show a softer side of Ashley Reaks with melodies and harmonies to boot.

This LP may feel a little retro, but this wouldn’t be news to Reaks. It unabashedly feeds off 70s spirit, 80s ‘oi and punk’, 90’s speed and 00’s PC lyrics and riffs. But Reaks delivers much more than this. There are the melodies. The harmonies and lyricism also surprise and impress. It really is quite scary to think what Reaks may be capable of next….