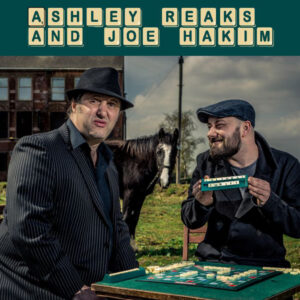 Don’t be put off by the opening bars of Abba’s SOS emanating from Nature Poem, the first track on the collaboration between Ashley Reaks and Joe Hakim, this is no pop album. Not for the first time, the two come together with eight tracks built up from the music of Reaks and the hard-hitting poetry of Hull poet Hakim.

Backing the duo are a clutch of fine musicians who have a history with Reaks – the remarkable voice of Norwegian Maria Jardardottir, saxophone from Dave Kemp and guitars from Nick Dunne. All these artists appeared on Reaks’ stunning Before Koresh album from earlier this year (see review here).

Perhaps the idea of putting music to poetry and prose isn’t unusual but, with the sounds of the brilliant Radio Europa still buzzing in our ears, it maybe marks a new genre heading our way. A slower, more confident version of rap perhaps, the blending of Hakim’s down-to-earth words with often quirky music is an absolute joy.

Jardardottir has a voice like no other, her involvement in Albert Hoffmann’s Bicycle for instance is refreshing as she presents a freeform jazz like ending to the track, and Kemp’s saxophone provides another edge to the sounds.

Hakim’s words are spot-on, entirely relevant about everyday people in everyday situations, he has the ability to write not in the conventional sense, but rhyming words after short or longer lines and sometimes midway. In a similar way to Faithless’ Maxi Jazz, Hakim inserts rhymes halfway through lines creating enthralling couplet patterns throughout.

Ironically, on Imposter Syndrome, Hakim throws the suggestion that someone may want to be the mix of Joe Strummer and John Cooper Clarke, and that mix is potentially what Hakim is. Punk attitude, feet firmly grounded.

Reaks too is a rare talent. His music fits the poetry perfectly, often with an edge – listen to the wonderful bass line on Imposter Syndrome or the subtle reggae backing to To Let or Albert Hoffman’s Bicycle and try to deny that there isn’t a genius lying beneath the surface.

Joe Hakim has a page on the This Is Hull website here. He can be followed on Twitter as @joehakim_.