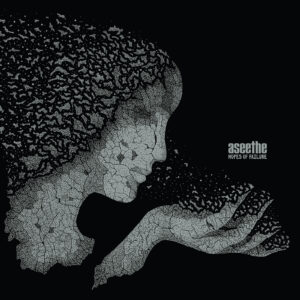 Louder than War’s Ioan Humphreys gets pummelled into submission by some heavy as shit metal.

February 24th 2017 sees the release of Aseethe’s new album ‘Hopes of Failure’ out on Thrill Jockey.  Seemingly moving away from their previous (self) releases of minimalist noise soundscapes, Aseethe’s latest release sees them taking the ‘doom metal’ genre and giving it a right kick up the arse. This four track LP starts with the delightfully named ‘Sever the Head’ and immediately you are thrown into the realms of repetitive riffs, weird drum signatures and enough sludgy murk to make you feel you are walking either in Victorian London or modern day Beijing…

The doom metal comparisons are immediate, but as the tracks go on, they actually seem inadequate a comparison and you slowly realise the Aseethe have something else going on with their sounds and riffs. The guitar sound reminds one immediately of early Earth LPs, but there is a more brutal pounding sound because of the extra instrumentation. There are also actual tuneful chord changes present here! Unearthly growling vocals come in and you are gently disturbed and uneased into submission. There is a slowing down to almost a halt in the middle, before the noise starts again and increases tempo to its devastating end.

‘Towers of dust’ is next up and again, there is a slow departure from the doom metal tag. There is melody and time signatures reminiscent of The Melvins and the UK’s almighty Part Chimp.  It’s atmospheric and starts with almost organic noises. More rhythmic poundings and chord changes punctuate the heavy as fuck distortion that the band seem barely able to control!

‘Barren Soil’ is more of the same brutal noise infliction, but with this track, half way through, you get the most grotesque pregnant pauses that create masses of tension, atmosphere and dread. It’s hard going, but this kind of band aren’t for the faint hearted. Final track ‘Into the Sun’ has a very corrosive guitar noise sound. It is heavy as fuck. It is repetitive and again, very hard going. And from the middle of the track, the band ramp up the distortion to a noise i’m not sure i have ever experienced. It is densely distorted, out of control and devastatingly unpleasant. It really is quite breathtakingly good.

This latest release from Aseethe is no way going to be everyone’s cup of tea. It’s niche, it makes for quite unpleasant and disturbing listening, but all the best art is hard going right? It has to be challenging and has to take you to places you don’t necessarily want to go. Aseethe are like the aural equivalent of a Goya retrospective. But you eventually come away thinking, “ok that wasn’t necessarily for me, but by christ is it powerful”. And this is what i like about this record. It has impact and it is dark. It’s not easy listening, but hey, i don’t find Beyonce easy listening either so fuck it. Listen to this album.

‘Hopes of Failure’ LP is pressed on virgin vinyl, packaged in jacket with flooded black pocket and black paper inner sleeve. A free download coupon is included. A limited supply will be pressed on grey vinyl. CD version in 4 panel mini-LP style gatefold package. They will also have a super limited edition (100) of Hopes of Failure on cassette.

Aseethe can be found on their Facebook, their label and their Bandcamp.