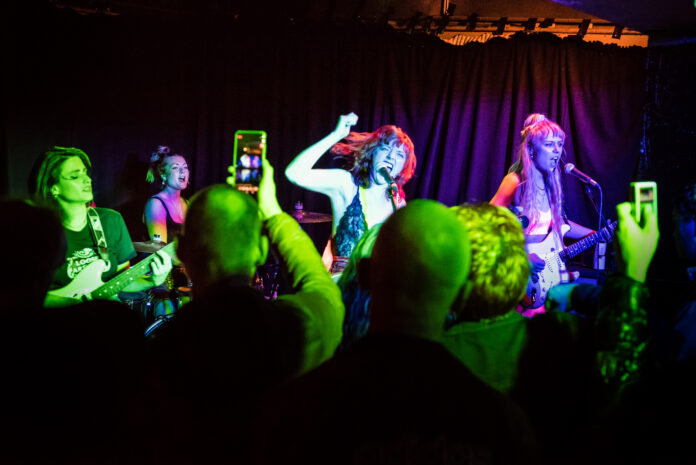 Croydon’s Bugeye arrived at Retro Bar in Manchester on Sunday with their As The Cro Cro Flies event which promises explosive punk, rock and indie bands celebrating female and non-binary musicians.

It’s been around 15 years since I was last at a gig in Retro Bar and it’s hardly changed a bit. The stairs as you descend are still a little sticky, the room’s dark and it’s loud. The bar staff are friendly though, all good signs for what’s to come. Unfortunately, due to it being Mother’s Day, and having had Mothers Day stuff to do I miss the first act I Doris, who I would have liked to see… hopefully soon.

Manchester based 3-piece The Red Stains take the stage at 6pm fronted by Edinburgh-born Natalie with Sterling on bass and Ben on drums. It’s a visceral, in your face performance but mesmerising. New song TV Static borrows, I suspect, knowingly from Joy Division’s Transmission. Elsewhere we are treated to songs cheekily promoting tram jumping and shoplifting, before we reach the latest single, Smile. During which Natalie steps off the stage, walks through the audience and goes to sit down for a drink before rejoining her bandmates. The short set closes with a punky version of Madonna’s Material Girl. I’m looking forward to seeing them again at festivals in the summer.

Next up are our ‘hosts’, Bugeye. I’ve been waiting nearly two years to see the band since they released their debut album, Ready Steady Bang. Opening practically with a fanfare from keyboard/synth maestro Robyn, they kick into album opener On and On and then onto Breakdown, which is slightly more frantic live. When The Lights Go Out and single Blue Fire sound epic. The band sound great on vinyl but live the songs really explode and take on a life of their own. Sunday Morning is a high point with Angela and drummer Kerrie harmonising. Electric is another standout with Paula’s funky bassline, which then merges into album favourite Shake And Bake. Sadly it’s over all too soon, but not before are treated to a superb version of Don’t Stop. I won’t be waiting another two years to see the band again.

Manchester/Macclesfield’s femme-queer Queen Cult follow. Whilst I know the name I’ve not heard or seen the band previously. I must say, before we even get to the music, that Maisie Johnson and Leila Jacklin are two of the most engaging performers I’ve seen for a long time; they have personality by the bucketload which draws you in and makes you want to watch. The band are extremely energetic and clearly enjoying themselves on stage too, as are Piers and Brodie, on guitar and drums. There are a number of standouts in the set: Woman That I Know; A Song About Consent, which unfortunately is as relevant as ever and has to be said; and the track introduced as being for the biggest BJ, Show And Tell. The set finishes with a glorious version of Anastasia’s Left Outside Alone (with a diversion into Killing In The Name for good measure). Another one for the ‘must see again list’.

Louder Than War favourites Loose Articles are tonight’s headliners. I’ve liked the singles but this is the first time I’ve caught them live. They’ve previously been compared on the site as ‘post Riot Girl’ and X-Ray Spex. I can see those comparisons but what I’m getting is The Slits (apologies if that’s too predictable) and The Fall. The quartet of Erin, Tree, Natalie and Louise are the most exciting thing I’ve seen for a long time and thoroughly deserve the growing reputation they have. They’re a tight unit who are clearly at the top of their game. Each song seemingly has numerous tempo changes and it feels chaotic, like it could fall apart at any moment, but of course it doesn’t.

Early single Snake is followed by recent single Chaos, which explodes in a live environment. This is followed by the slightly ’calmer’ spoken-word Dirty Dicks (from the forthcoming EP) ahead of singles Up The Disco, Buses (with Natalie almost feral in her dislike of said transport), and the almost poppy Kicks Like A Girl (dedicated to Gary Linekar, the crisp shagger). I’m not sure if they know it but they’re as cool as fuck, Tree especially while picking at her strings and in a world of her own. The penultimate track is a new one. Beer is introduced as a song about men who’d rather have one more drink than fuck, before the set ends with an exhilarating Lethal Weapon. Natalie’s leaves the stage stating, ‘we’re fucking class’. She’s not wrong.

Today’s As The Cro Cro Flies event has definitely been a success. Keep an eye out for the next one… will be announced here soon.