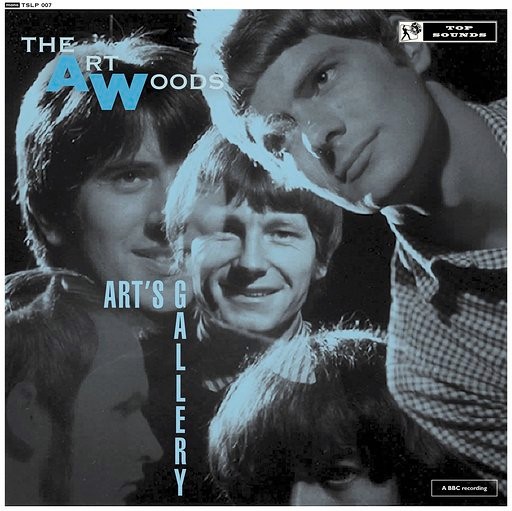 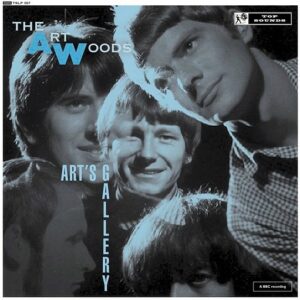 The Artwoods Art’s Gallery uncovers BBC session tracks by one of the most revered cult bands of the 1960s. Unheard for the best part of 50 years, Top Sounds Records have rolled out the red carpet for this release. Matt Mead reviews for Louder Than War.

Art Wood, older brother of Ronnie Wood (The Faces, The Rolling Stones) was the lead singer of The Artwoods. Bringing a unique take of classic blues, 60s r’n’b and jazz tunes, in the same league as Georgie Fame, John Mayall and Zoot Money. The band had a sturdy back bone of Derek Griffiths (guitar), Malcolm Pool (Bass), Keef Hartley (drums) and John Lord (organ, future Deep Purple). They are one of the best in their field. Distinctive, precise with a bucket full of heart and soul.

The sessions here have been unearthed from the archive of one particular keen fan who recorded the sessions at home at the time of the sessions being first broadcast in the 60s. With this in mind you might be thinking the sound of these recordings would be a scratchy affair bordering on inaudible. To the back of the class if those thoughts crossed your mind. Whilst these recordings aren’t crystal clear, the quality is very good. An astonishing find! 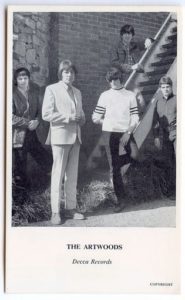 Recorded between 1965 and early 1966, it was thought with the Cherry Red Steady Getting It box set contained all the BBC session tracks with the rest either lost or wiped from the archive. There are 13 tracks in total here with familiar favourites including Oh My Love, She Knows What To Do, Work, Work, Work and Don’t Cry No More. However the real nuggets are those tracks that were never committed to disc, until now.

The sassy jazz feel of That Healin’ Feelin’ throbs to an ingenious jive. I Ain’t Got Nothing But The Blues and Black Mountain Blues churn to a popular blues groove. There’s the soul patterns of Out Of Sight and I Got A Woman. Mod’s were known to be big followers of The Artwoods, with Comin’ Home Baby there’s a nod to the parka crowd with its silky melody. There are also intros by the sadly missed warm tones of Brian Matthews, which add a sense of completeness to the gathering.

Both the vinyl and CD come with lavishly compiled booklets with rarely seen pictures, press clippings plus a diary of sorts detailing how the band came to fruition, background information regarding the sessions and an as it happened account from guitarist Derek Griffiths and label chief Nigel Lees. Nigel has done some serious work to bring this whole project expertly to fruition. As Nigel says in the sleeve notes Bob Carolgees and Spit The Dog t shirts were sent to those that sent in contributions. In my opinion Nigel should get the special privileged treatment. A custard pie from the Phantom Flan Flinger.

Art’s Gallery can be purchased from Top Sound Records website.