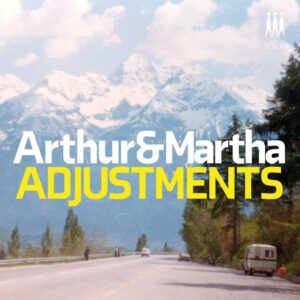 Louder than War’s Ioan Humphreys listen’s to the addictive first track from the remix album by Arthur and Martha.

Arthur and Martha was the project of Adam Cresswell (Saloon / Rodney Cromwell) and Alice Hubley (Mass Datura /Alice Hubble). Despite operating when electroclash and the new wave of synth led by Little Boots and La Roux swept the nation, Arthur and Martha were something different.  Their sound was described as “cutie krautrock” or tweetronica, and they used toy/playground electronic gizmos, battered synths and cheapo drum machines to create their achingly pretty, minor-chord synth hits. Imagine, if you will, St Etienne in space or Kraftwerk playing a freshers disco.

They gigged with the likes of White Town, Lo-Fi Fnk, Grovesnor, Plastic Operator and were acclaimed by the likes of  The Guardian, Word, NME, Zoot, and Artrocker with BBC 6 Music and Radio 1 airplay.

The debut album ‘Navigation’ took three years in the making but, despite good reviews, proved to be their only album – the band disappeared without explanation almost overnight.

A planned remix record sat on a hard-drive part-finished and unloved.  It was only several years later, once Adam and Alice’s solo acts began to get acclaim, that they discovered how popular ‘Navigation’ had been; with fans as far afield as Spain, Mexico and the West Coast of the USA declaring it their all time favourite record. As it started to get exposure again, the band decided to re-form for the send-off they never had, and to finish that remix album.

Of course the remix album was still not ready in time for their final show (at The Islington in London 2/319) but this felt somehow apt. (It is no wonder this new album has the Catalogue number Bot13.)

But here it finally is! It includes a number of remixes taken from their original period not least two totally unique versions of ‘Vallorian,’ the first the ear-piercing shoegaze interpretation by Tears Run Rings, the second a lougecore samba by Ghostbox collaborators Hong Kong in the 60s.  The more recent mixes includes straight krautrock take on the single ‘Autovia’ by Polytechnic Youth synth wizard Gabe Knox, with the second single ‘Music for Hairproducts’ given a darker sheen with a darkwave interpretation by Soft Riot. And Happy Robots – the label originally formed by Adam and Alice – is well represented too with remixes by Pattern Language, Alice Hubble, Rodney Cromwell and ex-Stereolab member Morgane Lhote (aka Hologram Teen).

Back to the lead track and a gentle piano (that have the same beautifully sad chords that John Carpenter would use?) slowly leads to an enhanced electronica. Drums and percussion come in to reveal an absolutely gorgeous throbbing bass. The piano riff progresses until the vocals of Alice Hubley  come in with a Kraftwerkian ‘matter of factness’ to them. This then leads into the final third of the track that is driven by a solid bass and drums, replete with twinkly electronica and more of the irresistible piano riff.

This track is an absolute delight to listen to and is an indication of the quality of the rest of the album. Currently on repeat in this household, as it should be in yours.