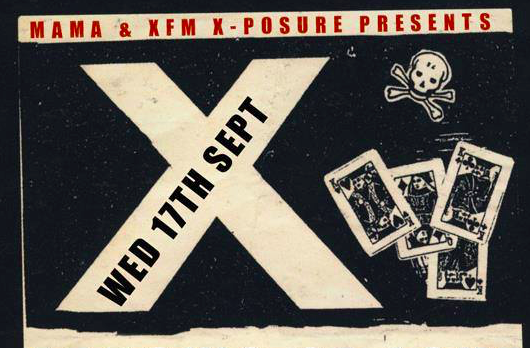 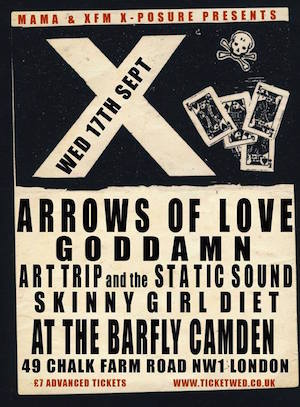 Louder Than War’s Keith Goldhanger drops in to the Barfly to catch a handful of London’s most promising young acts, headlined by Arrows of Love, a band who despite multiple line-up changes, still impress.

They still sound like all our favourite bands from the late eighties that came from the states and played at the Hammersmith Clarendon almost every Friday and Saturday night and they’re still sharp fresh loud and even madder than those Japanese hero’s of ours called Bo Ningen and now they have an album out called “Everything’s Fucked” that’s been spinning in our stereo’s since it dropped through our door a few weeks ago.
We’ve seen these before and it seems there’s slight line up changes every time we see The Arrows of Love.

Gone is guitarist Lindsey who at least for this evening is replaced by a man in a very ill fitting dress and alongside this odd looking fellow we have an audience that without prompting deliver the ooh ooh’s in the bands first, and very popular single “Honey” and then mutter stuff to each other about really wanting but not expecting to hear “The Knife”, a tune that if we heard it would contain 50%  of Lindsey’s lyrics.

“This gig is a gig of hope” mutters front man Nima , once he reveals his face from behind a balaclava.

He’s referring to the three support bands this evening, who are equally loud, have vocalists that scream the way the good lord intended and as with the headliners know where the volume knob is on their guitar amps.

SKINNY GIRL DIET are still in their teens and are beginning to scream a bit more than the last time we saw them. Once force fed a few more old Babes in Toyland albums and the occasional HOLE track we could have something that some bands twice this trios age are still warmly remembered by.

ART TRIP AND THE STATIC SOUND begin so well we’re starting to reminisce about those old X Ray Spex ditties however as the short set progresses we learn that this four piece have a sound of their own that will always be capable of clearing any cob webs from your stereos.

GOD DAMN are ace tonight. Another duo making music that we’d probably scoff at if the stage contained twice the personal that it currently does. It’s a nice noise these two make. Nicer than Royal Blood and nicer than Drenge. Just two artists they will forever now be compared with. We wait with baited breath for more of their tunes to be played in our homes once their album comes out before the end of the year.

But its Arrows of love who go marching on …a decent crowd behind them and a decent album to boot. An album everyone should have by now and if not then why not ?

All the bands can be found on Facebook: Arrows of Love, God Damn, Art Trip & the Static Sound and Skinny Girl Diet.

All words by Keith Goldhanger. More from Keith can be found at Louder Than War Author Archive.