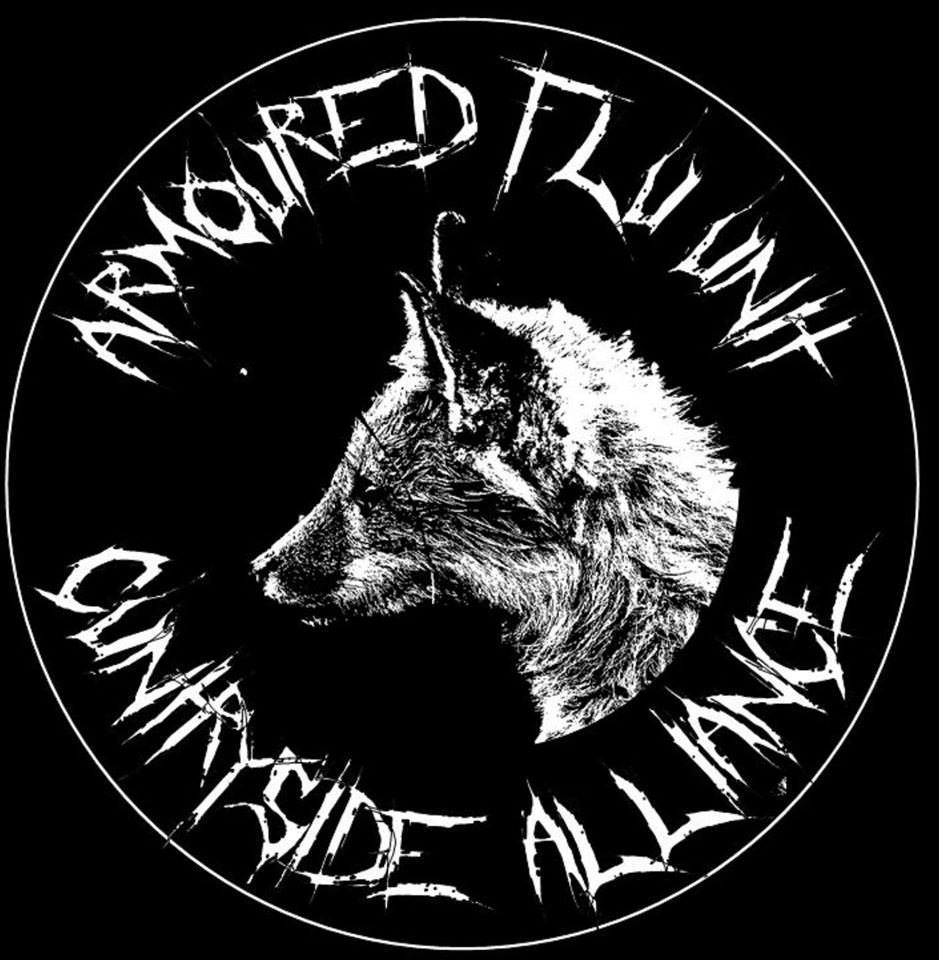 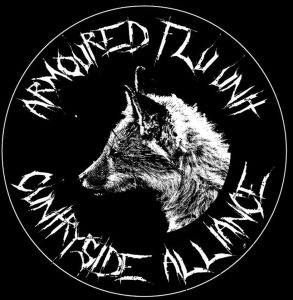 Activist punks ‘the Unit’ are a South of England-based Anarcho, D-beat, Hardco-oi!  ‘Super-group’ of mates making a racket, protesting and surviving…. Ged Babey admires their spunk.

Old Anarcho’s Never Die… they just get angrier…and louder and forgo any subtlety.  ‘Cunts Cunts, Cuntryside Alliance’… goes the chorus to the lead track Cuntryside Alliance.  ‘This aint no country issue. It’s animal torture and exploitation’. No messing about. Armoured Flu Unit get straight to the point.

Musically they sound like  “a fuckin’ bulldozer” according to a mutual Pint-sized friend, and he’s right. It’s Discharge-inspired Motorhead-heavy but all based around their beliefs and activism. There is absolutely no question as to whether or not they ‘mean it man’, they live it. Hunt Saboteurs and Anti-Fascists to a man.  But this doesn’t mean to say that there’s not a dark sense of humour and fun going on underneath.

Boasting about how many ‘cunts’ they can get into a song and having a song called Stop The Killing, which is dangerously close to Dick Dastardly & Muttleys Stop the Pigeon ( without the nab him, grab, him bit!) shows that at least they can laugh at themselves.

The band name incidentally is an anagram of “our mutual friend” which would’ve sounded far too softcore and emo!

I’ll let the band introduce themselves;

Armoured Flu Unit has been set up as a collaborative recording project to bring like minded individuals together across all nations, nationalities and genders in a bid to voice opinions against all injustice, inequality and prejudices we are subjected to on a daily basis. We do not seek to moralize people’s opinions but to Inform, Educate and Communicate our thoughts to a wider audience.

Nath Haywire – Vocals (Is one of the current guitarists for English Anarcho outfit ‘Liberty’. Previously played Bass with Southampton based band ‘Haywire’ He also writes superb reviews for Louder Than War)

Andy Morris – Drums (Previously drummer with ‘This is Brainwash’, the Goodtime Charlies and others)

Armoured Flu Unit are due to appear at any and every grizzled old anarcho-punk gathering and festival all over the UK and Europe this year -and match many of the old-school veterans for intensity and righteous sincerity and abject disgust at the way the greed and violence of government, institutions and corporations continue to affect the world.  ( Punks are Hippies really, only dressed in black and very little hair left nowadays!)

This vinyl only EP is part of a set by of 9 7″ singles to benefit the Hunt Saboteurs Association – the other bands being Liberty, Burnt Cross, Virus, The Domestics, Cress, Contempt, Oi Polloi and Anthrax.

Armoured Flu Unit are probably the ugliest band of the lot but in Cuntryside Alliance have written an anthem which many of their contemporaries and peers will hate them for, as its says everything in as blunt and straight-forward a way as possible. with a sonic bulldozer d-beating the message home, with a clenched fist and a grin on its face.

Armoured Flu Umit are on Facebook    GR Records are too 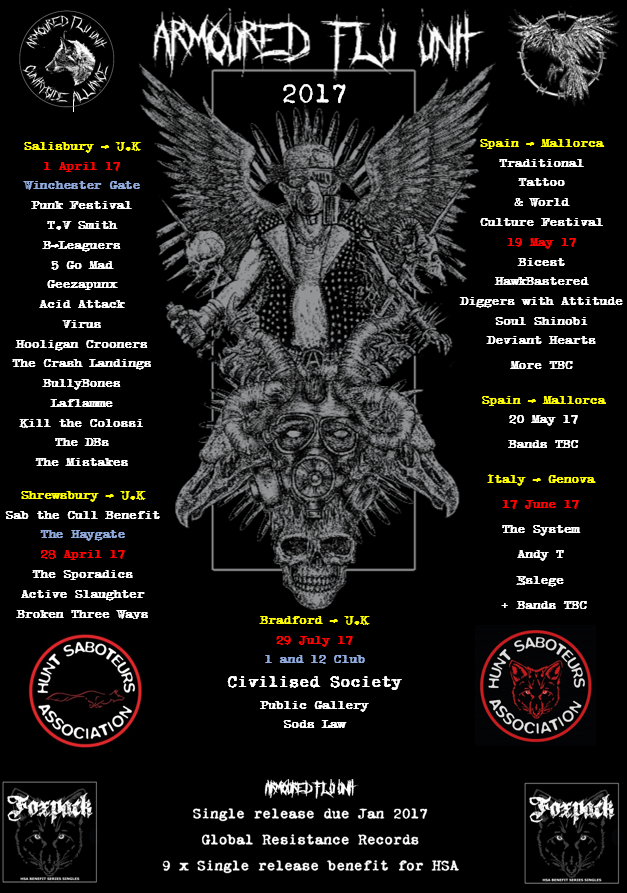 A planned ‘Punk Albums of the Year 2016’ piece didn’t happen in the end but – because its a great selection – here were Nathan’s picks of the year, just to give you an idea of the Flu Units ‘influences’ and his good taste.

OK technically came out in December 2015 but you’d be hard pressed to have a got a copy until 2016 so I think it should count. There is not a band song on here and lyrically they cover everything from fox hunting and the Tories to the mighty St Pauli FC.

The System – Slave to the Machine

Cracking tunes that are new but sound like they could’ve come out of the 80s. Also comes with amazing poster artwork

Birds of a Feather Flock Together
Excellent sampler of bands on Grow Your Own records or associated with them.