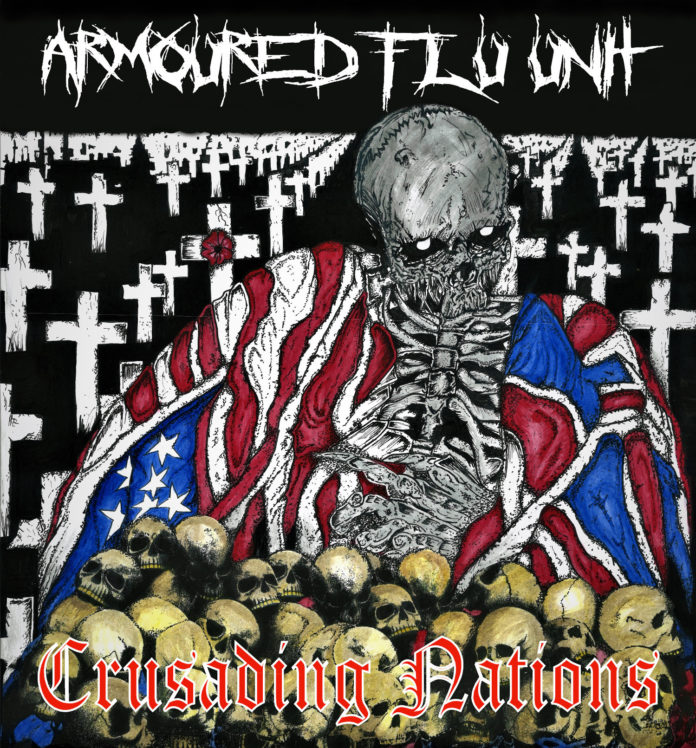 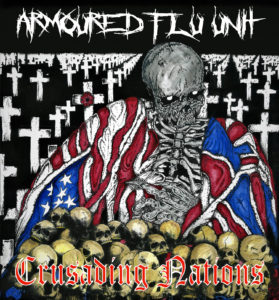 This is brutal.  This is immense.  Growling, grinding raging stuff.  Really well produced -with a huge guitar sound like a swarm of bees driving a juggernaut!   A couple of slower Amebix-style down-stroke songs to open and close – but in between, a brace of raging angry, fast songs somewhere between Discharge and Conflict sound-wise…. this really is a great mini-album if that’s your kind of punk.

I’m not the best person to review this. LTW’s most knowledgeable writer on all things Anarcho, Dis-core and Hardcore DIY punk, Nathan Brown, is unavailable because he’s too busy…  singing on this 10 inch album. So he can’t really review it himself.

If he did, I imagine he would pinpoint all the influences, other than the crunch of Conflict, the rumble of Discharge which I can hear, all-manner of lesser-known bands from over the decades and continents.

“This eight song power slab is purpose built for fans of CONFLICT, EXIT-STANCE, OI POLLOI, NAUSEA, MISERY, AUS-ROTTEN and all those other heavy thumpers of the anarcho punk variety.” says Welly in Artcore fanzine. A man who knows.

I dip in and out of different sub-genres of punk-derived musics and beyond. But I always have admiration for bands Like AFU who are committed to ideals and ethics and have a clear purpose to their music.  Anti-capitalist, anti-fascist and anti-bloodsports. Or to put it in a more positive way, pro-collectivism, pro-freedom and an end to cruelty & torture and war.

In the ‘Notes on songs’ with the album it says ‘Most of the songs are self explanatory’, but explains ‘ Makar is a treason law used by the Indonesian authorities in their genocide of the indigenous inhabitants of West Papua.’  Religious intolerance, capitalism’s effect on the planets ecology and under-cover police activities (Spy Cops spike-ops!) come under their scrutiny but 180 BPM is more ‘personal’ and ‘was written by drummer Andy whilst in hospital recovering from a heart attack’ – gallows-humour presumably in that the speed of the heartbeat is measured beats-per-minute the same as the speed of a drummer.

Formed in 2014 by Iain Influx (Alternative  / AUK) Nath (Liberty / Haywire /Whole In The Head) Danny (Haywire)  Andy (This Is Brainwash / Thee DB3 / TV21) on guitar, vocals, bass and drums respectively, this is a unit with a lot of experience and mileage on the clock.

The closing track  Grenfell, ‘was written immediately after witnessing the hulk of Grenfell Tower weeks after the fire’.  It’s a powerful song which builds from uncharacteristic gentle guitar-playing, but ends up as a raging song about class war.

It is an ultra-serious, intense set of songs, but I can always find something that amuses me even in the darkest work. In the song ‘Do You Really Care?’, after the first minute, in the breakdown section, vocalist Nath sounds like he gets winded by a punch in the stomach and Batman & Robin style ( Ka-pow!) goes ‘Oooft’ into the microphone! It get’s me every time!

Whether it’s a short album or a maxi-EP, I don’t know, but Crusading Nations is definitely  essential listening for ‘punks’ who care and rage against specifics targets rather than blindly at the world

Grow Your Own Bandcamp

Full disclosure – Nath is a mate who I know thru the local punk scene. I got him the gig writing for LTW when I kept getting Varukers-type stuff I couldn’t write about.  If AFU were a bit shit, I’d say so, but luckily they really are a great band – so no favouritism/nepotism going on.  Just so ya know.