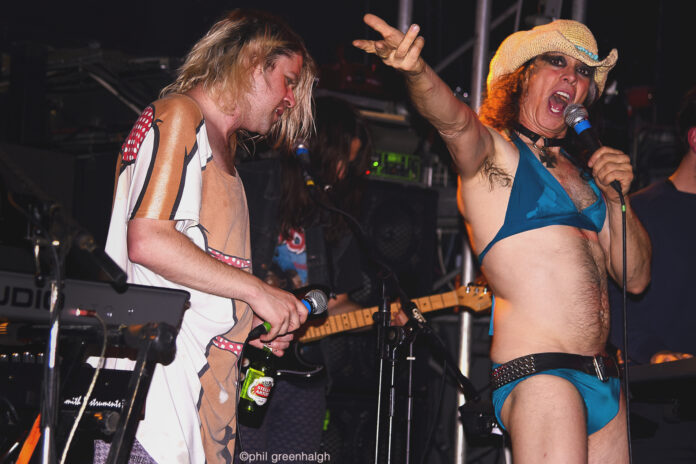 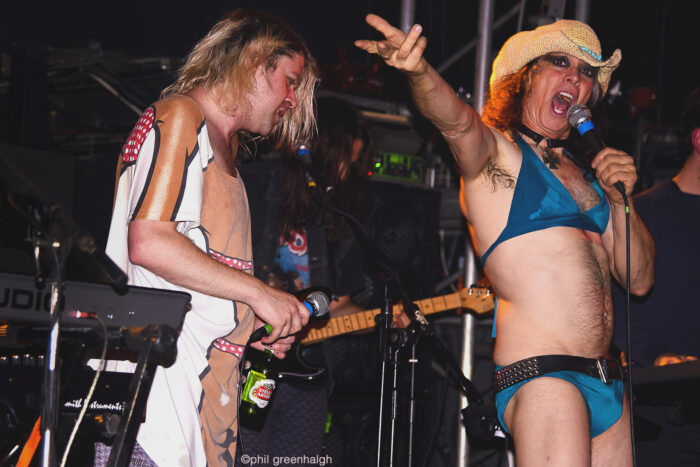 A hirsute drummer in a blue studded lame bikini, straw cowboy hat, knee length patent boots and an iron cross choker. (All you need to know? Please feel free to skip the rest of this review.)

I have to confess at approaching Los Angelean Ariel Pink at district in Liverpool with a misguided preconception that I was there to administer a psych assessment. Over the past weeks, I’ve happened across talks and performances from Mark E Smith, Julian Cope, Wayne Coyne, Michael Gira, some genuinely out there edge-walkers. I had a concern from reputation that Ariel Pink had made a conscious decision to walk the line; ‘hey look at me, I’m a bit mad I am’. Concerned that you can choose to be non-conformist, you can choose to push boundaries, but that true eccentricity is something deeper seated in the psyche, and not a matter of self-invention.

Illusions of overbearing faux eccentricity were doused when there was no glittery pomp pop entrance, just Pink ambling around the stage in search of a bottle opener for his Stella before launching into ‘getting’ high in the morning’.

Early indications that this risked being a diva performance propped up by a consummate 6 piece band, (he wasn’t overly impressed with the venue, or their lighting, but was at least amused by the fact that there was an area of the city called ‘Dingle’) dissipated as the man himself delivered more as the set progressed.

Ariel Pink positively goads the reviewer into fruitless comparison, by the time you’ve decided on referencing Gong and Zappa for the freaky ‘Jell-O’ the set has passed through chilli-peppers-surfin-down-sesame-street with ‘Goth Bomb’ and ‘Sexual Athletics ‘and strode into 70s power rock anthem territory with ‘Picture me Gone’ and ‘Baby’. Rest assured if you’re looking for a comparison, you’ve got to call on at last 5 or 6 decades of reference and be prepared to U-turn from song to song.

This is hardly a massive surprise when you consider that most of the set comprised the heterogeneous roller coaster 2014 album ‘pom pom’ – it’s glam, it’s heartfelt sentimental power pop about selfies and hiding memories on icloud, it’s surf rock, its genre-twisting genius at times, it’s WTF next?

‘WTF next’ is Alice-cooper-a-like drummer Don Bolles taking centre stage, resplendent in boots and bikini, redressing the fact that Pink himself preferred standard grunge attire to sequined Elton John platforms on this occasion. 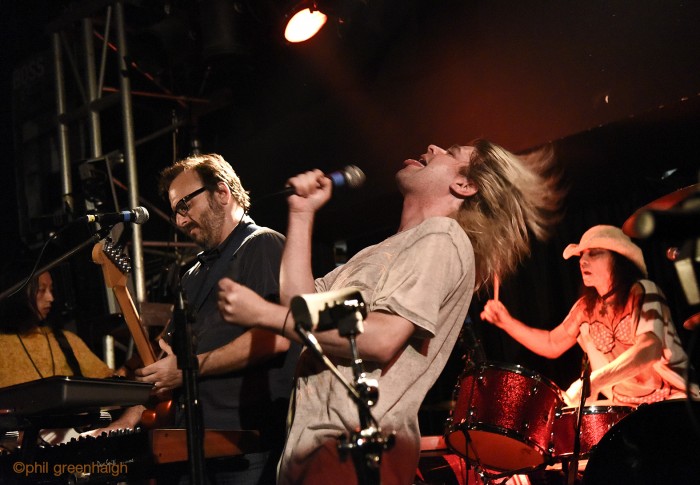 Whilst not setting about the boundaries with a sledgehammer, Ariel pink pushes and twists the envelope with creative confidence and challenges expectation with each tune. It’s not that any individual track, live or recorded, is particularly Avant Garde, far from it, in fact, the main body is straight-down-the-line pop variant. Rather there is a reluctance to be defined and predictable on a ‘next-up’ basis. It’s not rare for an artist to redefine their sound, just perhaps not so many times in one gig or album.

He may not be the self-proclaimed fruitcake I’d expected, but there were enough nuts to cause a reaction- One of them, worryingly, poking out from a blue lamé bikini bottom.

I’ll leave you with the worst-kept-secret tip that savvy Liverpool gig-goers have already long since twigged… If a gig is being put on by Evol, then it’s sure to have an undercard that punches well above its weight. Opening the night in the heavily incensed District fug, multi-instrumentalist James Canty, proved that a cheerful lament to Love Suicide isn’t an impossible contradiction. Liverpool psych rock outfit Strange Collective set closer Super Touchy with its Cramps-ey guitars and kooky falsetto refrain could have built for another 10 minutes and still have been mesmerising. Last up, The Vryll Society- a band that don’t rest on Mike Ellis’ charismatic, snake-hipped stage presence, but layer it on funky reverb-laden melodic thump. Another massive underline that Liverpool is a multi-genre tour-de-force right now, banging raw garage rock being right there in the frontline

Evol’s gig nights are of such quality that you’d not want to be drifting into the venue missing the support. If you can leave a gig satisfied before the headline act has even set foot on the stage, something is being done right.