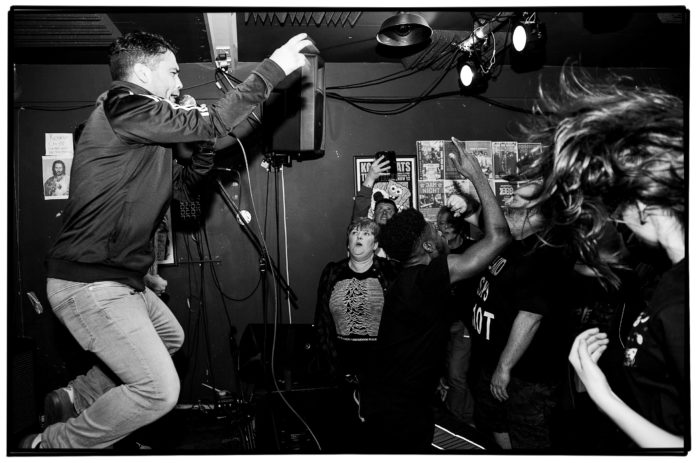 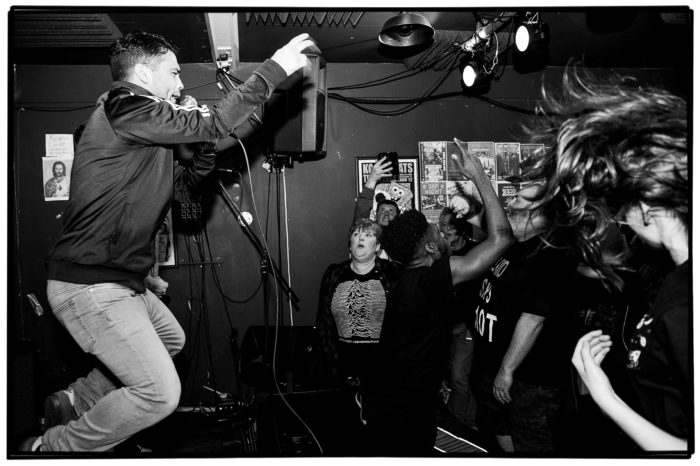 Argh Kid ended last year in style with a R10T of a gig at Night & Day that will be never be forgotten. He returns with a hero’s welcome to the Salty Dog as part of Independent Venue Week and it’s a hip hop party full of surprises. Wayne Carey does an old man body popping moonwalk to the front….

David Scott is rising up in the ranks of great live shows and this one is an eye opener. All hosted by newcomer, seventeen-year-old hip hop fanatic DJ Ewok with his dancing sidekick Flavour it all starts with Hamburger Man. They basically do fucked up cover versions overlaid with comedy rapping and singing by the dreadlocked frontman. It’s all fun, however, I can’t take them seriously. Is it just me? Are they being ironic? If you’re into Goldie Lookin’ Chain then maybe you’re on their wavelength.

DJ Ewok is going to be MASSIVE. He’s all over it with his fusion of old school hip hop and classic rock tracks. Mixing Cypress Hill with Led Zeppelin works on all levels and the crowd are whipped up into a funk filled remix that reminds you of those old Bronx parties back in the eighties. To top this he has his sidekick Flavour treating us to a masterclass of body popping and breakdancing, clearing space to show us his skills. A nice treat. Dropping NWA is always a good thing and the skill resonating from this young DJ is amazing. I’ll give it a few years before The Warehouse Project and Gorilla are knocking on his door. What he does next though is groundbreaking and I’m glad I’m here to witness it.

I’ve heard on the grapevine that Patrick T Davies was going to do a collaboration with DJ Ewok. Now those who know, Patrick is a quickfire spoken word wonder with an EP and a few singles under his belt. This pair up with Ewok is like climbing to the next level in spoken word circles. All six foot five of him humbly steps up to the stage. Ewok cranks up the effect as Patrick launches into new number Everybody’s At It. Fuck me, it’s immense, crunching bass twiddles and breakbeats surrounding the cutting bile of the truth spouting from his hundred miles an hour repertoire. There’s no prompt and I’m amazed he has all those words in his head and can recite them with ease. It’s like he’s found a soul mate in Ewok. He does a brilliant number titled Terrible Twenties and reminds us he’s just turned thirty, letting us into his last decade with some top laughs and tragedies. The last single Never Mind That Isn’t He Charming? is a bonkers electro hip hop number that lays into the wanker that runs our country. This is where the Sleaford Mods comparisons come in especially when he slays us with Mob Rule Britannia. The pair together are the hip hop equivalent as Patrick is as angry as Jason Williamson and Ewok does more than nod with a can of lager in his hand. He’s right into that mixing desk with pure concentration. They need to get this down in the studio seriously. Patrick leaves us the hilarious The Agenda Bender which rips into the nation’s newspaper reading idiots who lap up fake news. These two are going far. 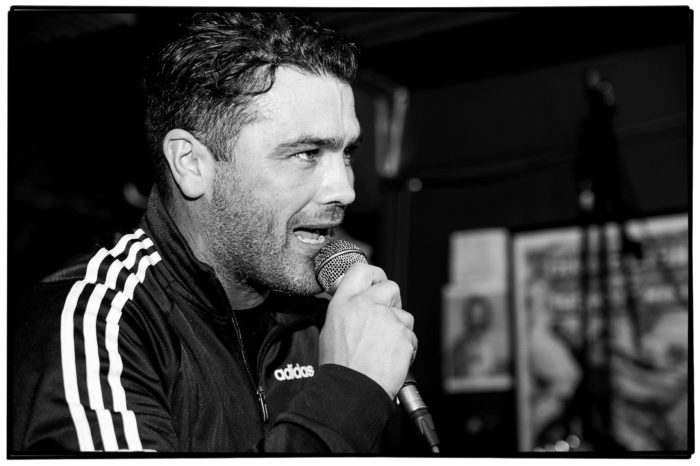 I’ve written loads about ARGH KiD and can never get tired of it. Davis Scott is a gentleman who interacts with his audience on every level. He doesn’t act like a prick staying behind closed doors backstage. He’s out and about chatting to his fans (I can see a few people pointing and saying “That’s him” then getting the bottle to say hello!). This is genuine stuff from a humble Mancunian staying grounded to his roots. The band are stripped down tonight with Ian and Jay providing Dave’s backbone, an important part of the whole ARGH KiD set up. Their set consists of all his top tunes. A brilliant Frank, a bass rumbling Reunion, the brilliant Tearaways describing his younger life in Levi and Longsight. And in between there’s his witty banter that could match any stand up. He invites Flavour on stage and probably his biggest fan Steve Noon who has actually made his own ARGH KiD T-Shirt with the words ‘Don’t Believe Their Shite’ emblazoned on the back. The audience are loving every minute of this. The excellent R10T sounds as strong as ever and Dave actually falls off the stage a few times he’s that animated. And he levitates again which is becoming the norm. New song Dickhead DNA is a hip hop ska banger that was first aired at Night N Day, yet everyone here are showing they’ve known it for years! Set closer Never Drinking Again just gets more massive every time. Hip hop that melds into drum n bass with ease and everything gets sweaty. As live acts go ARGH KiD are in a strong place at the moment and are about to blow up 2020.

ARGH KiD photo credits: Sal_GigJunkie, https://www.gigjunkie.co.uk/Use of this images in any form without permission is illegal.