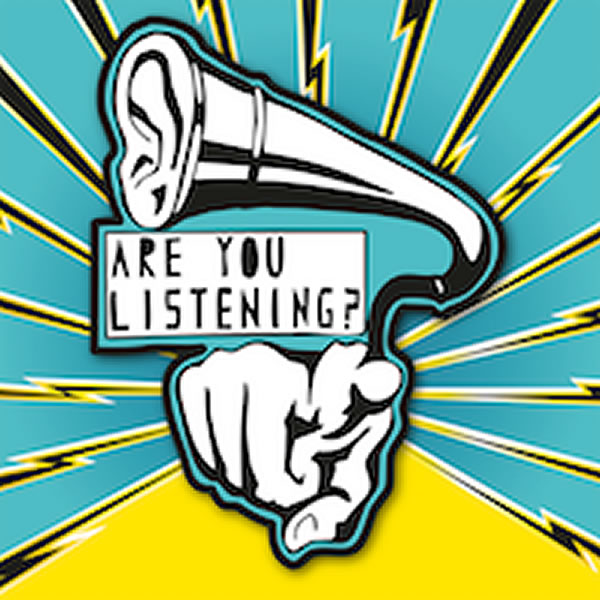 Are You Listening? Festival

Another day of venue hopping – Are You Listening? Festival in Reading is now five years old. Here’s what we witnessed. Keith Goldhanger reports for Louder Than War.

Are you listening? Festival in Reading is the perfect festival to experience if you’re one of those people who enjoy going on a bit of a pub crawl (although drinking isn’t compulsory) and having a look and listen to one of the many bands (Over fifty spread across nine venues) on offer within walking space of one another. Preparation is the key here. It’s easy to be tempted into attending events like this just by looking at the half a dozen names at the top of the posters that we already know but we are also aware that all day events such as this are never that simple.

Sitting at home trawling through each unknown bands Facebook pages beforehand is one thing. Trying to make any cast iron decisions about seeing something we hadn’t previously witnessed before arriving is another.

Missing something that may soon become an audio obsession for sometime after an event is not acceptable in this day and age either. It’s all out there on the internet, we have the internet on our phones and all the acts have tunes available. Therefore with all the preparation available at our finger tips, we don’t expect anything to have escaped our headphones before we arrive.

Are You Listening? is now in its fifth year and this one day festival is also an opportunity to help raise funds for Reading Mencap  , a local charity that supports children and adults with learning disabilities and autism. Volunteers hover around doorways collecting money from those of us not used to seeing loose change from a fiver once we’ve purchased a beer and the charity aspect is important to acknowledge at times and more refreshing than to hear someone standing at the door discussing the business plan they have lined up for the artist an individual may be relying upon to provide a future pay check.

Once we get here we pick up the schedule, try to discuss who’s who and what’s what but then dive head first into the nearest venue without any idea what we’ll be seeing and then simply allow fate be the decider.

CODY NOON are playing in front of what they tell us is one the biggest audiences they’ve ever played in front of. Events like today are ideal for situations such as this. Whist it’s easy to name ten familiar (to us) bands on the poster that could be staggered across the day for our own convenience, this festival spreads out the new and the local along with those we already know. It allows bands such as this to play to an unsuspecting audience and as usual it’s an early afternoon audience containing at least one of us that pays attention and then goes home to listen to the bands tunes again once the weekend is over.
CODY NOON are a duo who replicate some of the feelings that God Speed You Black Emperor allow us to feel but lacking in layers of noise that an additional half a dozen or more people involved would provide us with. The drum machine plods and kicks us in the stomach as the guitars ebb and flow providing us with sounds we do like to encourage and recommend as something we’d enjoy hearing at bed time although after lunch as is the case here did us just fine.

Down the road we have a look at West London quartet BOYS  whose two and a half minute dreamy psychedelic pop songs have at least one of us mentioning those very early Primal Scream tunes from over thirty years ago that The Stone Roses eventually came along to provide us with better versions of and releasing one album before …well, we all know the rest….. It’s all on a drum machine as well and we begin to wonder when that big round thing at the back of the stage is going to start being used.

Because our (free) schedule we were given wasn’t in twenty four hour clock format some of us arrived at South Street Arts centre a couple of hours earlier than we should to watch a children’s author entertain us with some poems.
We were met with locked doors.
This meant teenage four piece THE KEEP CATS  down the road at The Rising Sun were witnessed before Sahara Dam  rocked the cobwebs from our ears and entertained the increasing numbers of attendees trying to decide how to plan out their evening ahead. 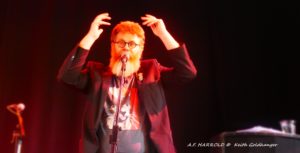 Back at the now open South Street Arts centre, we sit down in the company of A F HARROLD (pic right) , described as a poet and children’s author who tells us stories about getting thrown out of Greggs Bakery, recites his poetry over instrumental backing provided from his MP3 player and gives us the impression after twenty minutes that this man probably has many more stories to tell one day that we may enjoy listening to.

DUOTONE   in the same room provided us with one of the days highlights. A man called Barney, a Cello, a voice that is not too dissimilar to the band (we are already missing) Dry The River , a floor full of pedals that loop and echo his instruments and a violinist perform tunes that grow from subtle relaxing chilled out pieces of music into loud, almost anthemic climaxes with the added acoustic guitar thrown in. This guys music is really worth checking out. There’s a couple of albums available and (to us) a new artist that may reappear in our live again in the future.
Pete Hefferan , in an adjacent room is playing newly penned tunes to a busy room who seem to be aware that this could just be a one off performance. This is the guy who once fronted Pete & The Pirates and each tune is met with the huge appreciation from those in attendance familiar with the local mans attendance on a Reading stage.

Meanwhile, at the same time across town at the venue called Public (which is where we’d started the afternoon), one of the best bands in the world this week were playing and we never saw them.
One of us claims to flick through every artist in advance of these events however the majestically named HERE ARE THE YOUNG MEN AND UNCLE PEANUT  (it’ll soon be rolling off the tongue) were doing this type of thing.

We missed it.
How shit are we?

Peter Hefferan’s laid back entertaining set may never be repeated or Duotone’s set of songs never forgotten but Here are the Young Men & Uncle Peanut simply have to play a show in front of these very eyes A.S.A bloody P. Radio X DJ John Kennedy was on one of his running around watching three songs for a couple of hours sessions and this was the first band he convinced anyone listening we should listen to.

This is how things happen folks.
Here are the Young Men & Uncle Peanut are going to be everyone’s new favourite band.
Possibly.
Hands up out there who wants to see this then?
Sort it someone please.
On a Tuesday.
Stage time six minutes past nine . . .you know the drill.

CLOCK OPERA  (main pic ) continue to roar. And hit things, make a lot of clicking noises with clanging glitchy electronic samples and entertain us with all the best bits from their two albums. A Piece Of String brings out the pots and pans, Once and For All and Belongings have us singing along and Lesson No 7 brings the short set to it’s finale. 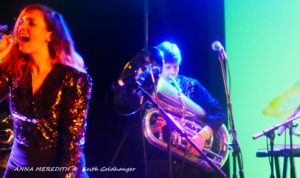 Time to catch a bit of TUSKS  (we now have a spring in our step)- a solo act playing electronica dreamy synth tunes that seem instantly comforting and then back to St Lawrence Church for ANNA MEREDITH (pic Right) who starts her engine running with the synth heavy intro of Nautilus which draws our attention away from the bar. In no time at all she’s accompanied by a tuba, a cello some banging drums and a wailing guitar. We’re treated to something that’s electronic, industrial, noisy, orchestral and you can dance to it. It’s thrilling and sounds fantastic echoing around in the church. They end the evening with Erasure’s A Little Respect and it’d be a great way to end the day if it in deed this was the end of the day.
FLAMINGODS https://www.facebook.com/flamingodsmusic/ are a chaotic rhythmic exotic noisy four piece owning loads of equipment they’re plugging in and out of different sockets in between and sometime during the pieces of music they’re throwing at us at an alarming rate. One hectic exciting tune after another with odd snippets of rocking out with heavy percussion and fierce sounding electronics that could quite possibly be described as a psychedelic band playing world music.

Apologies and regret are due to not being able to witness more of the additional fifty or so acts performing over the day. Great reports of superb outfits were being filtered through to our ears as Radio X DJ John Kennedy began spinning tunes for the punters eager to continue dancing the night away.
But some of us were planning on an early rise the next day to grab those last few Glastonbury tickets.
Some of these bands that played today won’t need them to get in we’d like to think and we’re sure the names of the acts we didn’t manage to catch will appear in our lives at some time in the future.

All words by Keith Goldhanger. More writing by Keith on Louder Than War can be found at his author’s archive. You can also find Keith on Facebook and Twitter (@HIDEOUSWHEELINV). You may subscribe to the Goldhanger Shorts Facebook page too if you so wish.