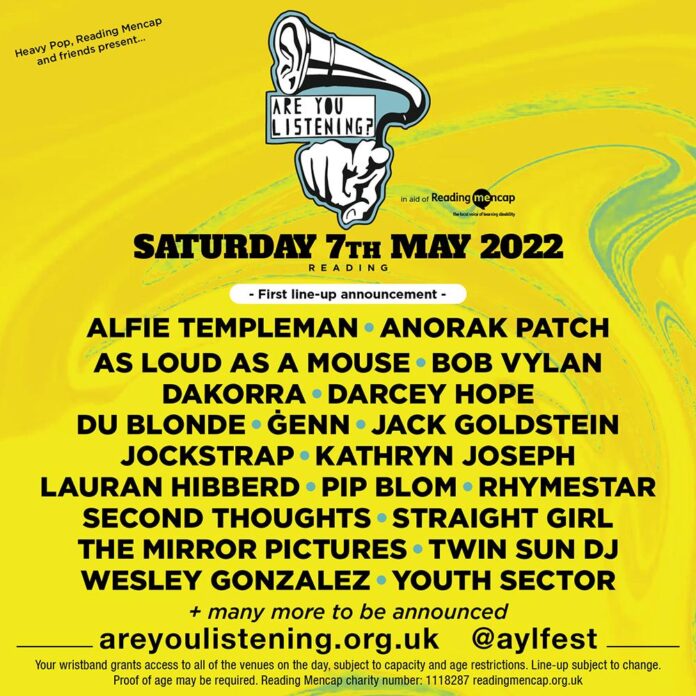 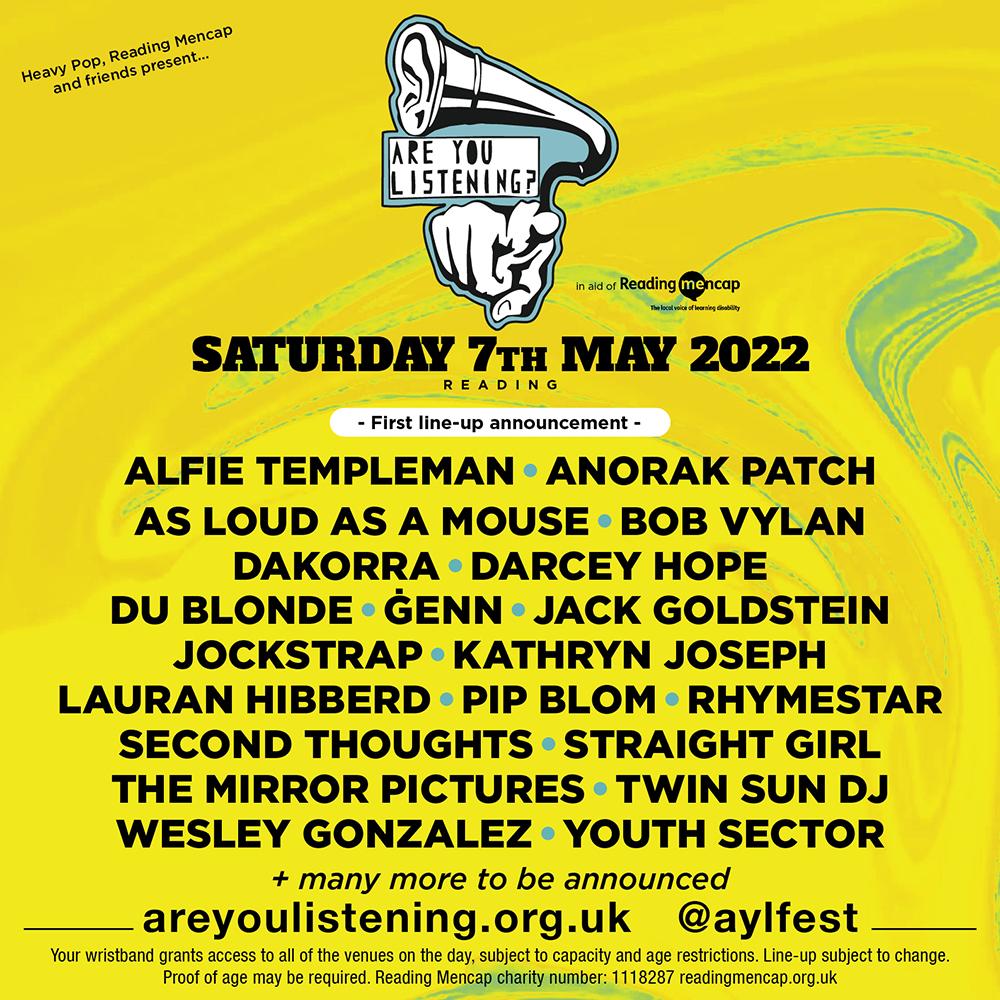 The sun is out the sky is blue and the days of watching as many bands as possible in a single day are approaching again. Keith Goldhanger recommends Reading’s Are You Listening? festival for anyone who enjoys strolling around town centres visiting any of the numerous venues open for entertainment that day.

Regulars to this event know the score.

We start by trawling through the huge list of band names we know the names of but wouldn’t necessarily be able to whistle any of their tunes yet.

Except maybe ALFIE TEMPLEMAN‘s infectious pop songs who some of us were going to save until a huge Glastonbury stage appearance one day.

Same with PORIJ who we’d like to see in one of those tiny tents on a hot summer afternoon and will have some of us hoping for a prime spot in one of the seven venues available again at this years event in heart of the Berkshire capital.

Are You Listening? Festival is a stroll around Reading and we guarantee you’ll find at least one band you’ll consider has justified your attendance.

Unless you’re a grumpy old sod.

Just make sure, though, that everyone is aware that chatting really loudly over any of this will not be tolerated. We’ll tut loudly and moan about it afterwards on Twitter of course because we’re all a little bit too nice. Which goes with the tone of this year’s line up. But chatting stops please (to be fair it only annoyed us once last year).

It’s been said before by at least one person around here that the first time JOCKSTRAP were seen they were remarkably terrible. The second time they were remarkably fabulous. 50/50 is the opinion as well as the tune of recent months. This is the sort of band some of us were saving to see in a hole in the ground at five in the morning at Glastonbury. Anything’s still achievable – inside a room in Reading will do for now.

Some of us remember seeing the fabulous PIP BLOM a few times pre Covid. They were fabulous, therefore one or two of us may have a circle around their name too. Then there’s BOB VYLAN  (shouty loveable sweary bloke whose record collection we wouldn’t mind seeing one day), TALKSHOW (shouty band that remind some of us of the early days of New Model Army), LAURAN HIBBERD  (cheeky, glamorous, marvellous and fabulous) and WESLEY GONZALAS (bloke who used to be in the fabulous Let’s Wrestle in the olden days) are always great and it feels as though it’s been far too long since one or two of us have gone back for more, even though we’ve continued to listen to the music these people make at home. GAG SALON with their awkward but original set of songs that some of us have just recently begun listening to will be worth another look (or a first look if you haven’t been out as much as we have recently) whilst YOUTH SECTOR are surely to be a big favourite on the day if anyone happens to be in the same room without knowing what they’re about to see in front of them.

PARLOUR sound great on first listen. So good we’re wondering if we’ve crossed paths before (we have – Singer was in Reading favourites Tail Feather many years ago),  JOSH VINE was closely paid attention to when he performed in front of us previously, and folk-pop duo MEMORIAL, who we can’t remember if we’ve seen before (and are featured on Spotify’s highly coveted ‘The Most Beautiful Songs in the World’ playlist) sound like another act worth catching. We also have READIOPHONICS , a community acapella band, to catch, miss or forget about, and we’re already close to getting stressed out about some of the bands we want to see that might be performing at the same time as each other.

Note to promoters …… Four day event, same line up all four days and we’ll promise not to go and watch the same band twice…..Deal?

……anway….<name deleted> look and sound terrible and get crossed off the list however at least one more person now knows of the existence of a band called THE BIKER GROVE FAN CLUB who we’ll all want to see just because of their terrible name. They sound brilliant though. A band with the fury and humour we haven’t seen or heard since Cabbage. Their video Cake Shop is a little disturbing but ace. If you’re after seconds King of Scots ….OK we’re there – don’t push in please – these sound like a band we need to meet and establish whether they are popular enough yet to have members of their audience brave enough to bark during the ‘hit’ ?

SLOW DOWN, MOLASSES boast another strange name, are loud and probably own a great record collection themselves we’d imagine (Dinosaur Jnr, Sonic Youth, that kind of stuff….). These get earmarked in the hope no one else is playing at the same time too.

Finding some of the music these bands are responsible for can take too long at the moment so we’ve done it for you. AS LOUD AS A MOUSE are described as a punk rock duo (but remind us of Pavement) …but that’s all we could find out about them during the time it took to play their two fabulous tunes.  They sound great we’ve established, and get added to the list we expect we won’t stick. Some bands we simply ran out of patience trying to find out about…but we can confirm that we trust this event enough to know we won’t be leaving disappointed.

It all happens in Reading on Saturday 7th May and you already know where this is and how to get there. It’s always worth it wherever you travel in from and the money made is all for a great cause.

Since starting in 2013 the Festival has raised over £70,000 for their charity partner Reading Mencap (local charity that supports people with learning disabilities and their families).

With only a few more weeks to shake off band clash anxiety we’ll now provide you with a selection of tunes from the people who will also be in town that day.  Here’s the playlist, See you there hopefully.