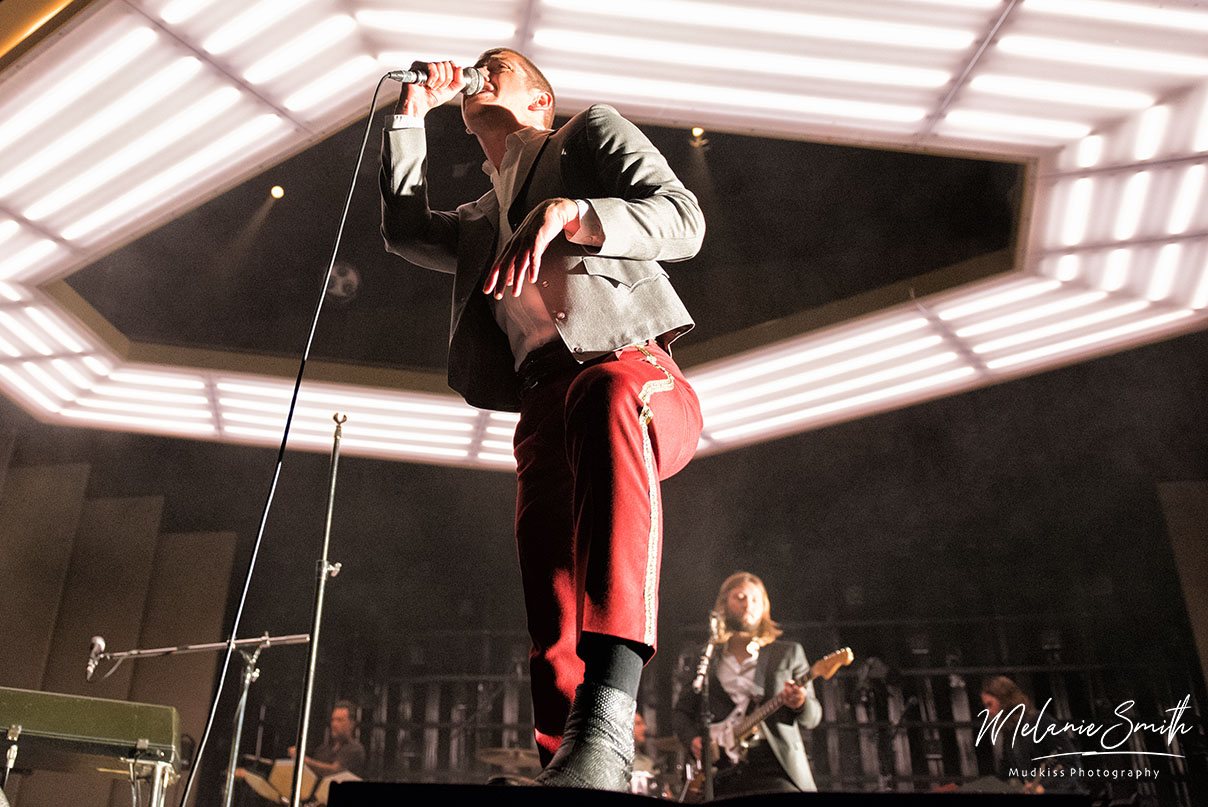 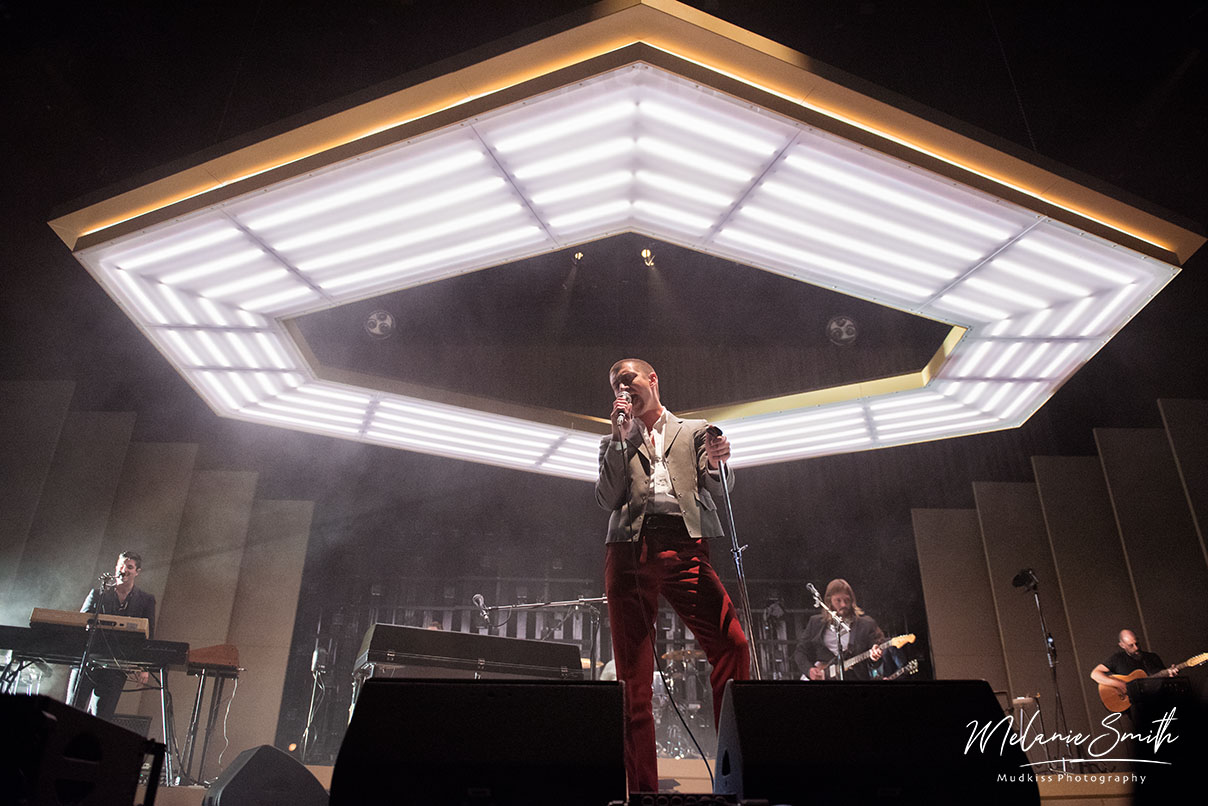 Sheffield’s finest start their Tranquility Base Hotel + Casino UK tour at Manchester’s Arena and Louder Than War were there to see what the Arctic Monkeys were going to deliver to their fans on the first of their fifteen-date tour.

Breaking a somewhat lengthy hiatus the Arctic Monkey announcing a new album and live dates ignited a whirlwind throughout social media. The news giving fans and the casual supporter plenty to feel excited about. Tranquility Base Hotel + Casino sold at missile like speeds and although it had a few head-scratchers here and there, it was in the main applauded for its intriguing inventiveness. As the initial run of dates went on sale there was some consternation regarding ticket prices. Which sparked as much debate and derision as those tickets that were immediately found on secondary sites at inflated prices. The tour dates were duly increased by nearly 50%, which is certainly a substantial addendum for everyone, in particular, those fans following the full tour.

The time waiting for the start of the UK dates has overflowed with knowledge gained from overseas dates. However, anticipation is high for something extra for the UK leg of the tour.

Manchester Arena is inundated with hundreds of Arctic Monkey t-shirt wearing devotees all radiating restless excitement. The floor and stands are starting to fill when Brian and Michael D’Addario aka The Lemon Twigs emerge on stage. Their set is filled with the vibrancy of unconstrained glam rock and charismatic pop, that amplifies the brother’s musical talents as well as showmen in their own rights. While, The Lemon Twigs exceed expectancies; you can’t help but feel waves of impatience, for the main act, from some of the audience as they stand about drinking overpriced fizzy larger. 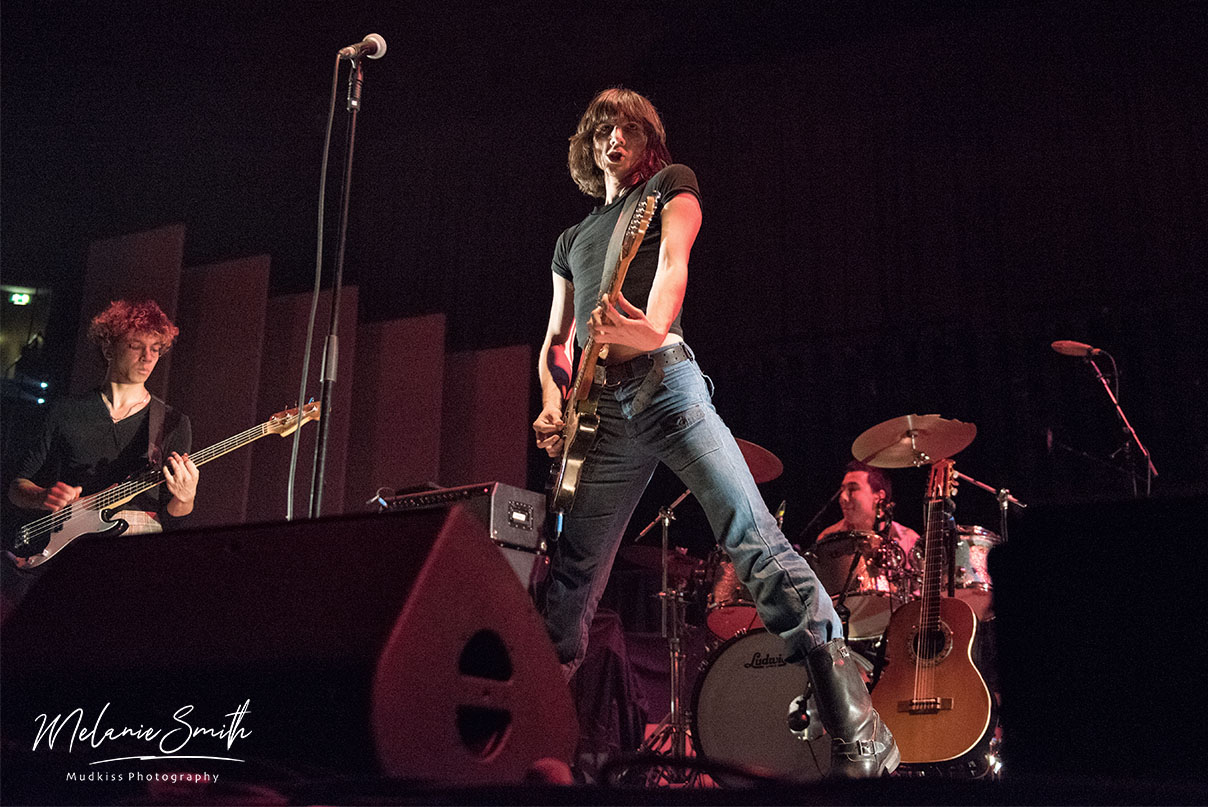 The stage is set to represent an area of the Tranquility Base Hotel + Casino. The colour palette and light arrangements have been used to convey a hotel lounge; not a five star one, but maybe a four. The band strolls on stage to a clear roar of appreciation from the now packed arena and never an Arctic Monkey trait to engage in stage chit-chat storm straight into the first of twenty-one tracks. The hypnotically cinematic smoothness of Four Out of Five, would on paper seem a jarring first track. However, live there is a seedy whimsicality and in fact a quirky innovation on their usual flavour, that provides a striking start. Merging with ease into Brianstorm its lyrical venom and that savage guitar couplet never gets old. Alex Turner wraps himself around a snarky bag of witty riposte for Snap Out Of It while Nick O’Malley keeps that exquisitely understated tick tock bass perfect.

The impeccable vaporous balladry that is Crying Lightning is skilfully carved out by the clean guitar from Jamie Cook. Cook’s musical output is constantly compelling. The hazy spell of Crying Lightning is broken as Matt Helders beats out the intro to Teddy Picker. The 21,000 strong audience takes advantage of the increase in intensity bouncing along, arms in the air, fingers punctuating words. Shifting momentum again for 505, Turner’s vocalised imagery paints an intense portrait of agonizing need. Tear stained cheeks are reflected by stage lights: we are only six tracks in. 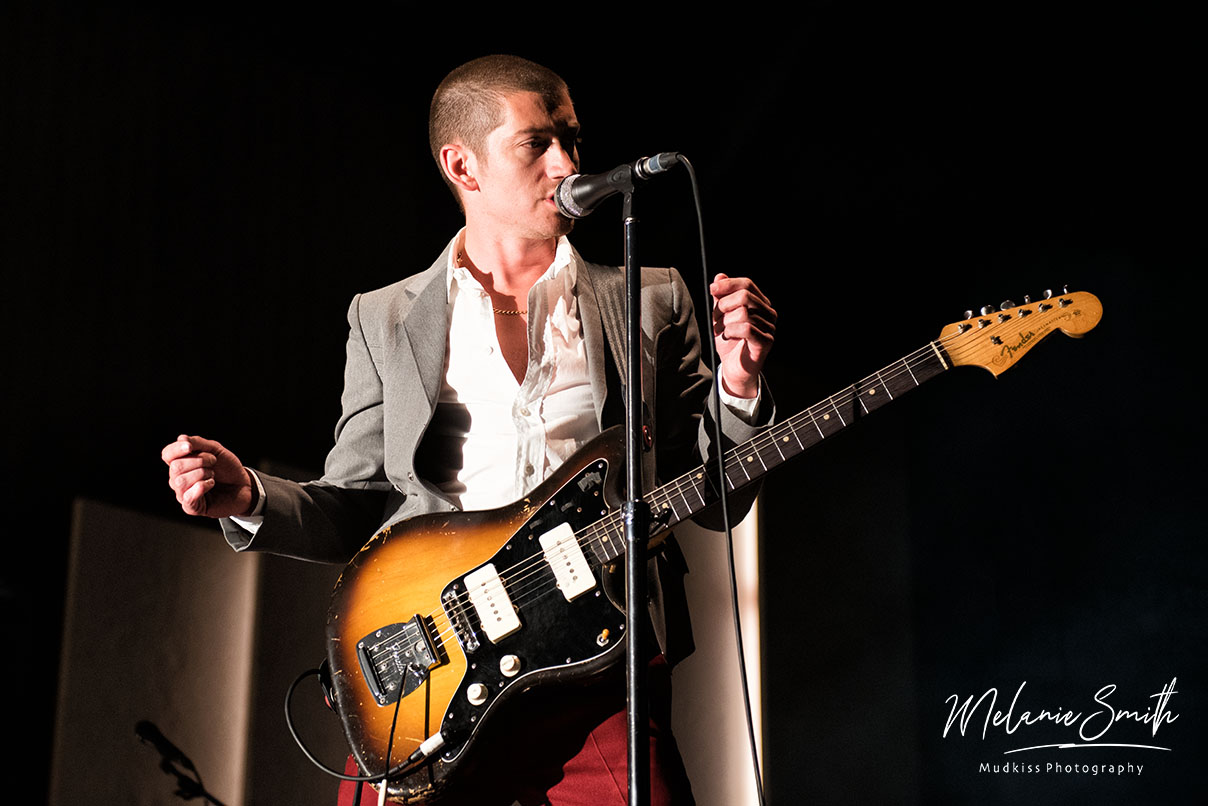 Back to those filmic vibes for Tranquility Base Hotel + Casino its thick bass hook seduces you into the songs fuzzy, haunting and pictographic layers with ease. Do Me a Favour and Don’t Sit Down ‘Cause I’ve Moved Your Chair kind of get instantly forgotten when unexpectedly Turner rolls out the line “Get on your dancing shoes” and the arena loses its collective mind. I can get on board with Arctic Monkey’s reinventions when it’s delivering regardless I thoroughly pine for their dirty bass lines, filthy guitar riffs, those articulated lyrical elegies and saucy inferences. We are lucky and spoiled: Cornerstone comes next. 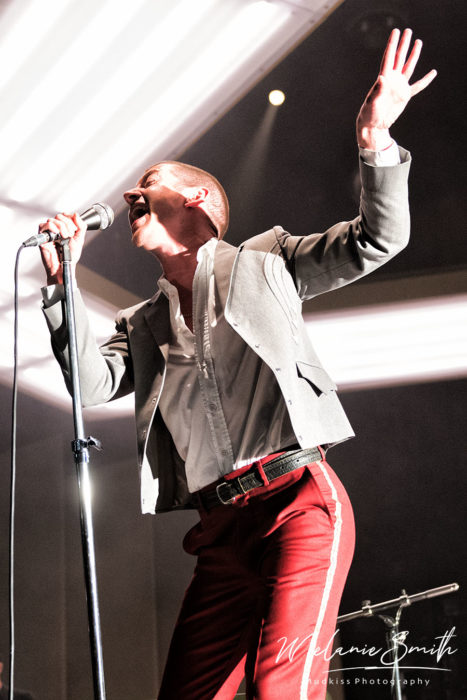 The peppering of tracks from Tranquility Base Hotel & Casino continues with, what appears as, caution. One Point Perspective all flowing guitar chords and prominent synths provide a more measured sonic vastness. However, that gigantic movie feel remains omnipresent. The audience sings note for note along with Why’d You Only Call Me When You’re High? and Knee Socks all its maliciousness sounds like poetry flowing from Turner’s mouth. Returning to the latest album, Batphone, it is tangible slinky and dark “I launched my fragrance called Integrity” purrs Turner: lyrically and musically it is somewhat ungainly.

Back to firmer ground with Do I Wanna Know? Followed by a thoroughly enthralling Pretty Visitors and taking things to levels boarding on hysteria I Bet That You Look Good on the Dancefloor. Everyone is in a frenzy screaming with excitement and passion. The flurry of agitation culminating in everyone holding that final “1984” while simultaneously applauding. The band leave the stage for a few minutes the applause and cheering rising until they return for the encore. Starting with Star Treatment, Arabella both of which come across a little strained, before, finally squeezing the last drop of energy from everyone for R U Mine?

As ironic as they are iconic, the Arctic Monkeys have maintained to a degree enigmatic, providing that unknown mystic. Musically they played their hands incompatibly with expectations or to any previous successful formula. And live the Arctic Monkeys ceaselessly provide a prized bunch of memories to immerse yourself in. However, it’s hard to tell if in 12 years 21,000 people will ecstatically screaming any of Tranquility Base Hotel & Casino into an arena’s shadowy ceiling: but it’s worth sticking to find out if they do and what the Arctic Monkeys come up with for their next reinvention.

Check first market ticket retailers for availability or if you need to use the secondary ticket market consider Twickets for fan to fan for face value sales.

Live Review by Katie Clare. More news, articles and interviews by Katie on Louder Than War can be found at her Authors Archive. Katie can also be found on Twitter where she tweets as @tokyo_katie.

Katie can now be found on Instagram as tokyo_katie_captures her feed is devoted to captures from shows past and present.