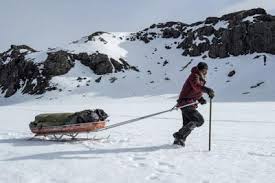 Now showing at Home and on general release

In a pared down tale of survival against the odds, Lee Ashworth wonders if Joe Penna’s Arctic can bring a narrative trope synonymous with traditionalist masculinity into the 21st century.

As Hans Overgård (Mikkelsen) stares into the white abyss of the Arctic wastes, grand themes radiate outward through the magnetic core.  Concepts with the stature and gravity of tectonic plates shift and crack like planes of ice, extended outwards across the globe like lines of existential longitude.  Overgard, and quite possibly Penna, know that the cliche is true and even what we might think of as a negative form of abyss – the super bright brilliance of the North Pole – returns the gaze with equal force.

It’s ironic insofar as depth perception, a key feature of this film in so many ways, is difficult to gauge in expansive, relatively featureless environments.  The surface of the film, visually, is the almost pristine surface of the tundra and given that minimalism has been the leading harbinger of Arctic’s arrival in UK cinemas recently, the cinema-goer contemplating attending a screening might wonder if there will be enough of interest to sustain over an hour and a half of viewing.  As it turns out, through some surprising and some conventional turns in the narrative, there is more drama on the surface than one might imagine.  There is also plenty of turmoil beneath the surface.

To avoid spoilers, it is sufficient here to outline the premise of the film: Overgård, played with unerring conviction by Mikkelsen, has already crashed his plane in the Arctic and is eking out a basic existence, ice fishing, keeping warm and operating equipment to send out distress signals.  He is wounded but stoical, marking time by performing key practical tasks, counting down the time he has left in terms of dwindling reserves and keeping vigilant for roving polar bears.  It is still in the early portion of the film when a helicopter appears and attempts a rescue.  Suddenly, life becomes even more complicated for Overgård.

Regardless of the degree to which any cinematic narrative attempts verisimilitude with real life, fiction usually requires the kind of risks or unexpected turn of events that demand suspension of belief in order to work.  It is hard to believe that in 2019 there is anywhere where one could fail to be successfully tracked and recovered, or even areas still so remote as to be impervious to modern communications.  It is hard to believe that… but of course it is true, just difficult to appreciate from our digital bubbles, especially in the northern hemisphere.  The absence of our digital comfort blankets in Arctic reveal the soft, fleshy vulnerability that is never wholly reinforced and strengthened but only masked in our modern lives.  Atrocities caused by climatic or human events are only ever the swift swipe of a Polar bear’s paw away; instead we bury our heads deep in our Parkas, peering out to bow over our luminous screens, oblivious to how perilous a sudden change in the direction of the breeze might be: so little can we do to mask our scent.  Nature is the great leveller, capable, given a sliver of a chance, of reducing the loftiest ideals to torn flesh and chewed bone.

At first sight, we’ve seen Overgård before: we know him well.  He’s a he, that’s for sure.  From Robinson Crusoe (1954 etc) to The Martian (2015), the tale of the stranded man without recourse to the support network of his era, is an ironically well-trodden narrative path.  Often, such a device can be used to strip away contextual elements and yet during this process, such idiosyncrasies of a given milleu are cast into stark relief.  It is cinema as a form of social anthropology whereby a distancing strategy is used allowing us to ‘see’ our subject, to which we are usually far too close.  But what is the essence of ‘man’ as portrayed by Penna and Mikkelsen?

Overgård has the usual, time-worn practical chops of the lone survivor.  He is resplendently self-sufficient to the kind of degree that will engender feelings of complete inadequacy amongst the most resilient and motivated cinema-goer.  Here is a man capable of creating an ice-fishing system with an integrated alert to notify him when a fish is caught.  Most of us struggle to successfully manage our social media notifications, and that’s without having to contend with the prospect of being consumed by a top-level predator whilst we shuffle between screens.

Yet there is something different in Overgård.  He somehow embodies less obviously traditional masculine qualities such as care, patience and compassion.  He is not immune to futility but he is quietly determined – never does he “science the shit” out of the Arctic, for example.  Instead of fist pumping there are partially frozen tears and a stare so long it is possible that he can see all the way back to his homeland and vicariously experience the life he is missing.

Throughout this isolated odyssey it is the aspect of care that most colours this depiction of man.  Riven through everything Overgård does is a kind of immersion and attention to detail outlined as a complete way of being in the classic text, Zen and the Art of Motor Cycle Maintenance.  It’s that attention to detail, his willingness to fully engage with all aspects of his present situation, that brings the viewer into Overgård’s world, brings us much closer to him and ultimately towards a better, more loving, more life affirmative concept of ‘man’.

In recent cinema, with the caveat that the events depicted life in the sixties, First Man (2018) for example, chronicled the personal, isolated and pioneering journey of Neil Armstrong.  Here, the protagonist is portrayed as determined but reserved, circumspect yet closed-up, resistant to emotions.  Overgård, albeit reacting to a situation not of his own making or volition, appears integrated and open, and admirably fuelled by hope.

After leaving the cinema, I wondered what this film would be like if the evolution of masculinity depicted here had moved one step further and how much more daring and truly twenty-first century this would be had Overgård been female.  In the meantime, Penna may have mounted a defence of the male or at least presented men with a character profile worthy of aspiration.

Check out the trailer for Arctic here:

You can find the official website for Arctic here.