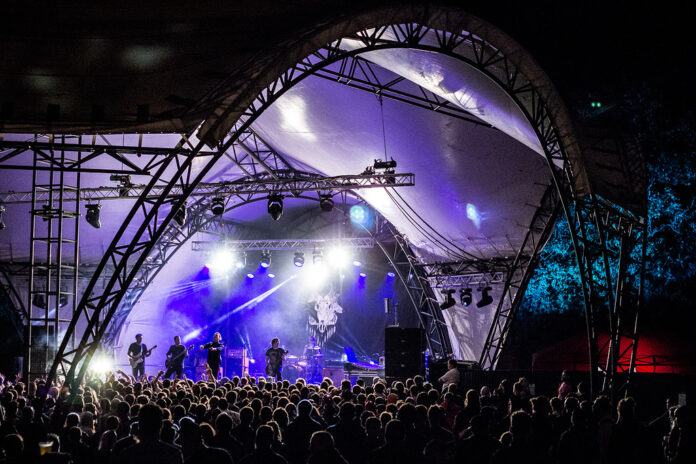 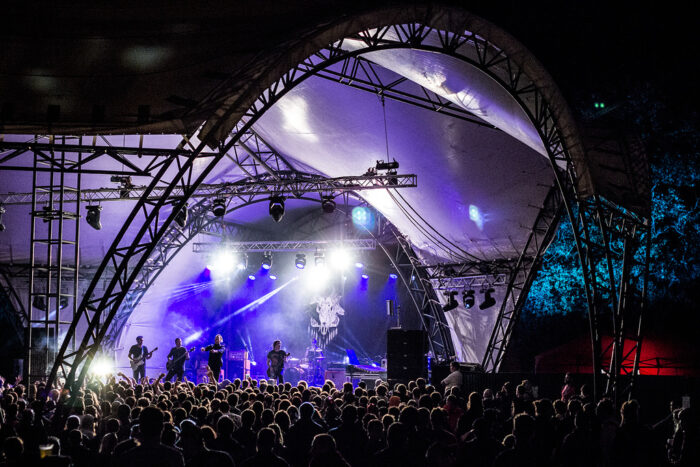 DB Schenker reports back from ArcTanGent, the UK’s only festival dedicated to the very best music from the worlds of math-rock, post-rock and noise rock, coming at you out of a farm just south of Bristol. All photos © BatGippa | Brendan Stephens.

Festivals. Back in the day there used to be just Reading, Glastonbury and that one with bottles of pee wee at Donnington. More or less. These days though, there’s literally thousands of the fuckers.

The festival thing is now so ubiquitous and acceptable that it has been argued that they are replacing clubs as the place for the youth to be and be seen. And in the main, these twenty first century open air gatherings are less about music and more about lifestyle.

For the kids they are a chance to peacock around and snapchat themselves into a coma. For the older generation they’re a weekend away camping, with booze on tap and the ever-present scent of class C narcs. And there’s nothing wrong with any of that, per se.

Putting Rebellion, ATP and the noble TNS records Manchester Punk Festival aside (these are essentially indoor affairs, all B&B and chalets) you have to look hard to find a festival where it’s more about the music than the big flags and silly hats. Let alone a tribal gathering for a recognisable scene or discernible counter-cultural movement.

ArcTanGent – down in the hills south of Bristol, daughter festival of the bigger and more established 2000Trees  and now in its third year – is nonetheless  just such a beast.

Majoring on the mainly instrumental and avant garde end of the musical market, ArcTanGent is unapologetically niche as hell. Most of the 4,000 or so attendees will personally know at least one person playing on one of the stages over the course of the weekend. Or will have played there themselves last year. There are a thousand different band t-shirts on display. And not one the same. Only the ladies don’t have beards.

It’s that kind of crowd.

For the punk purist, this may be problematic. You only get to play here if you are really fucking good at music. It’s a little bit arty. It’s a whole lot of left-field instrumental cleverness and crossing-over that’s more progressive than subversive. A few of the bands look like they are showing off, playing eighteen chords when three would do. It’s prog, Jim.

To some, the neo-prog rock genre (also known as “math” or “post rock”) with its dizzying time changes, blasts of squealing and widdly widdly guitar playing is just so much smartarse noise. It’s not “real” music.

But then again, that’s what they said about punk in the 1970s. And what many people – like the odious little aeronautical prig Bruce Dickinson – continue to say about punk today.

And anyway. If you subscribe to the philosophy that punk means looking forward and not back, and swimming outside of the artistic mainstream wherever that fucking takes you, this is punk as it gets.

Because the four tents that comprised this snappy little three-dayer sheltered a sparky little riot of stylistic colour and ideas.

And although the big names of the math rock world on the bill – Cult of Luna, Fall of Troy and Rolo Tomassi (remember them?) – all did the job with intent, they were not necessarily the standouts. In this context though, big means occasionally played on the second hour of the Daniel P Carter Radio 1 Rock Show. So it’s all relative.

And anyway. Here were some of the best bits.

Bodyhound. Textbook four-piece mathcore with great algorithmically plotted hooks that arced like the movement of the fucking universe. With a spring in its step and a charismatic boyish glint in its eye. Basically the best of its kind out there. Seriously.

USA Nails. Clattering and clanging noise rock out of the Jesus Lizard or Pissed Jeans stable floated along on some of the filthiest bass heard since David Wm Sims hung up his four string and took up bookkeeping. Worthy of note.

Blanck Mass. Solo electronic project of Ben Power, also of Fuck Buttons. The anthemic power of Daft Punk, with the gravity of a stellar mass. And the depth, layering and sonic spectacle of the second coming itself. The soundtrack to the best science fiction film never made. Epic? Yes.

Dillinger Escape Plan. Probably the most mainstream band of the festival. All taught, sinewy flesh, shearing guitars and inhuman rhythms. A visceral, physical prospect in a scene that is better known for its cerebreality. A sweaty highlight.

100 Onces. Shitnuts tight, technically jaw-dropping two-piece precision punk. With the wit and irreverence of the mighty NoMeansNo. Utterly loveable. And deserve far more credit than I can give them here.

IEPI. Three pieces of tightly knotted, Spanish jazz/funk rock that somehow has both the edge of the Jimi Hendrix Experience and the Catalan anarchists of yore. Hot sexy stuff.

Talons. Bombastic and symphonic progressive metal. With violins. It may sound a little bit shit on paper but in the ear and played in front of you this is not unlike the theme to a James Bond film where the communists win. Which has a unique appeal.

Deerhoof. Imagine a band fronted by a manic bass playing pixie, backed by that Morello bloke out of Rage Against the Machine and a Polynesian god on guitars – with Animal out of the Muppets on the drums and doing incidental surrealist spoken word. All playing a mix of perfect anti-pop and noise and god knows what. With charm and swing. You probably can’t imagine that. Which is part of the genius of this ultra-prolific and happily under the radar San Francisco outfit. Essential.

Deafheaven. A normal enough looking bunch of American post-hardcore kids, with the power to flit between soaring shoegaze and wrenching black metal blast beats in a heartbeat. Probably a fucking nightmare to dance to. But technically very, very impressive.

As with any bill of this size, not all the acts, including a few established and venerated ones, quite lived up to expectations. It would be churlish to name them here. Maybe on another card they would have stood out. It maybe shows the strength of the field they were playing in here that they did not.

Then there was the silent disco. As an innovative way round the apparent 11 pm noise curfew, each night after the last band the festival organisers hand out wireless headphones illuminated with bright LEDs to anyone that wants them, over which various bands from the day play DJ sets in the main arena until everyone gets bored and goes to bed.

It’s a nice idea. Simple and very effective. However, The sight of about a thousand flashing headsets swaying roughly in time, in the pitch black, with only chanting and singing along  to be heard has the feel of some kind of digital age Jonestown just before the massacre. Or of the machines making the assimilated humans dance for their entertainment after their overthrow of mankind. Thoroughly bizzare. But likely a right old laugh if you were part of it.

Particularly as all they seemed to be playing was Blur, a selection of Smiths classics and Uptown Funk. I guess deep down even hardcore musical progressives just want to be loved.

You’d never get the BBC covering this festival. It’s too weird without being kooky. The  unique pitch – to the progressive, to the nichiest of niches – seems like a canny move though. By appealing to a small but dedicated fan base, It’s basically restricted by design to a manageable but financially viable scale, and leaves the door open to whatever the musical underground thinks of next. Thus guaranteeing both its freshness and freedom from the grubby, interfering paws of the mainstream commercial music world for future generations to enjoy.

Possibly. But whatever happens next. Musically interesting things happened in some muddy fields in the Mendip Hills last weekend.

And that is a good thing.

More photos from ArcTanGent can be found on BatGippa | Brendan Stephens Flickr.