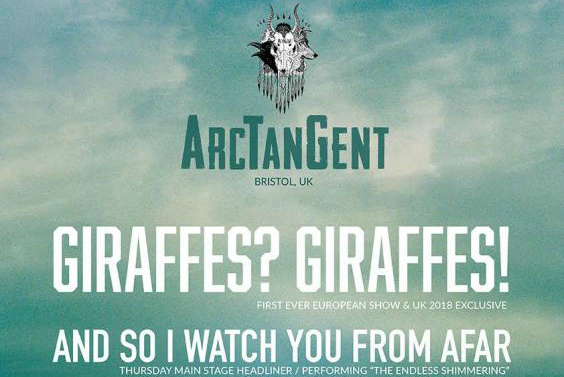 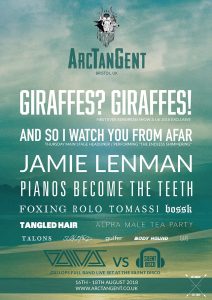 ArcTanGent Festival 2018 will take places from Thursday August 16 till Saturday August 18 at Fernhill Farm in Somerset. Over the past five years, ArcTanGent has built itself a solid reputation as one of the best UK rock festivals for exclusive performances from outstanding worldwide artists and supporting exciting new emerging talent and being the perfect festival for enthusiasts of math-rock, post-rock, noise-rock, alt-rock as well as everything in between.

ArcTanGent have announced their first wave of bands and they are an exciting and interesting mix that includes: And So I Watch You From Afar, Pianos Become The Teeth, Jamie Lenman, Foxing and playing their first European show GIRAFFES? GIRAFFES!.

Festival promoter James Scarlett says “We’ve spent the last few months curating some very special experiences for the ArcTanGent faithful. We’ve got GIRAFFES? GIRAFFES! playing their first ever European show, And So I Watch You From Afar performing their new album in its entirety for the first time and the madly bonkers idea to have Gallops playing a full band live set at the silent disco. Plus, we’re very happy to have Big Scary Monsters and Holy Roar doing a Thursday takeover. I can’t breathe I’m so excited about all this and I can also confirm that we’ll be releasing our Friday & Saturday main stage headliners before long – they are BIG! ATG#6 is going to be the best one yet for sure!”

This year the main stage will be open on Thursday for the first time – headlined by ArcTanGent Festivals most requested band, And So I Watch You From Afar. The Northern Irish instrumental rock band will be returning to the festival for the fourth time and are playing their 2017 The Endless Shimmering in its entirety. Joining them on that stage will be the stunning Pianos Become The Teeth and American indie rocker’s Foxing. 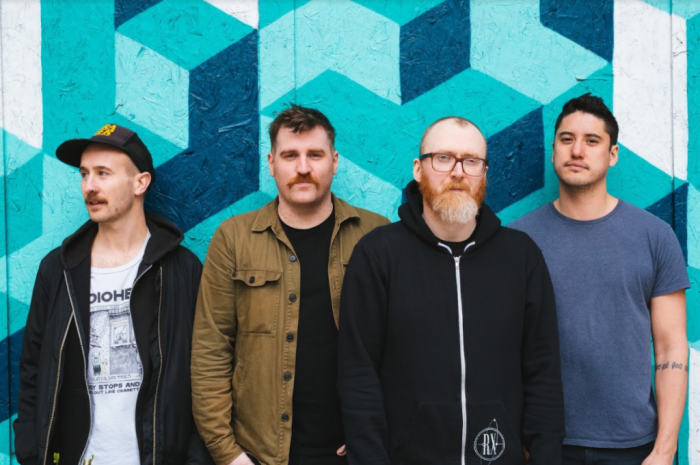 And So I Watch You From Afar’s Rory Friers explains “Every year ArcTanGent makes a home for strange bands like us, our peers around the world and the amazing people who make it such a special scene to be a part of. We feel very lucky to be a part of that family, and to be headlining a night is something very very special for us”

There is also an exclusive UK show from math-rock pioneers GIRAFFES? GIRAFFES! “We are totally ecstatic about coming over to the UK for the very first time – and especially to be playing at ArcTangent. It’s one of the raddest festivals out there.” says the band’s guitarist Joseph Andreoli. 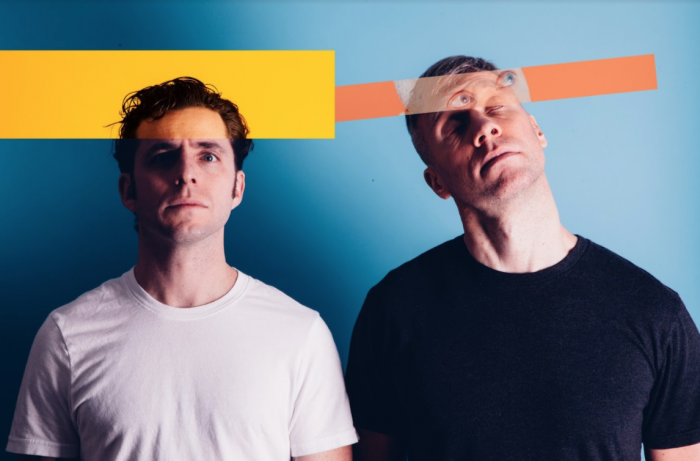 Gallops will play a full band set at the famous Silent Disco, speaking about the set, Mark Huckridge explains “We are looking forward to returning to ATG this year. We will be premiering an all-new live show for a unique ‘live silent disco’ set, remixing our tracks on-the-fly alongside warped visuals. We are aiming this one at the dancefloor. It’s one for the wide-eyed dreamers”

If all this is not enough to wet your appetite for ATG#6; two of the UK’s pre-eminent indie labels, Holy Roar and Big Scary Monsters will be taking over the PX3 and Yohkai Stages to showcase some of the best bands the UK has to offer. “Kev recently threatened to stab me in the eye with a fork because I asked him to share.” Explains Alex Fitzpatrick, founder of Holy Roar about Kevin Devine of Big Scary Monsters “Kev is mean. Mean Kev. Revenge will be sweet come ArcTanGent though – when Holy Roar will do battle with Big Scary Monsters across two stages on the Thursday of the festival. It’s going to be epic and we are hugely excited to be given such a special opportunity by our friends at ATG”. While Kevin from Big Scary Monsters “We’ve been at every single ArcTanGent and it’s always one of the best weekends of the year. This is the first time we’re putting our name to a stage though and the only shame is that we have to share it with Holy Roar.” It sounds like both labels are ready for battle and no matter who triumphs between the labels: the audience for sure will be the winners.

Tickets are on sale now with a variety of options that should cater for most needs. Including (however not limited to) Day Tickets, Two-Day tickets, Three-Day Tickets, a VIP Package and a joint ticket with 2000Tress Festival that will save you 10%. Full details of what each option includes and purchase links can be found here.

Those that want to do ATG in style this year now you can simply relax in a boutique or pre-pitched with ATG’s glamping option provided by Tangerine Fields which will be equipped with showers. Space is limited though, so if you want one done hesitate. More information and purchase links from Tangerine Fields available here.