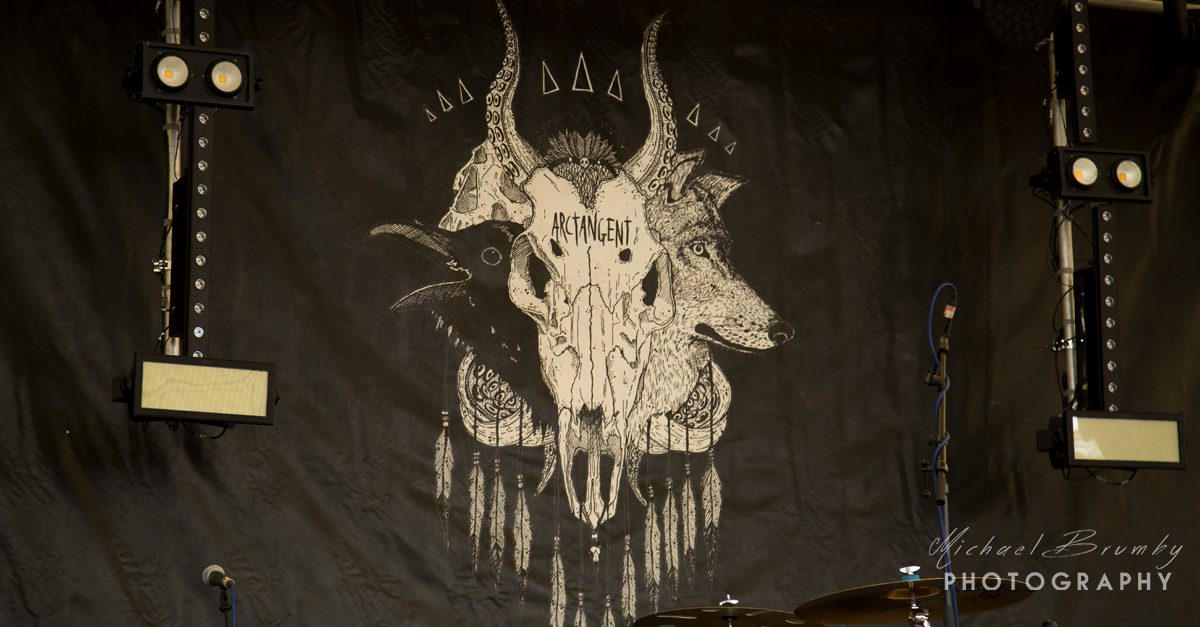 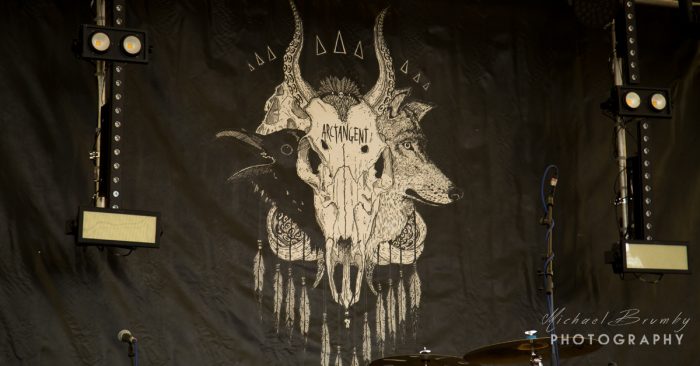 ArcTanGent Festival referred to as ATG is hosted just outside of Bristol at Fernhill Farm on a remote countryside location. This is the 5th year of ATG and still no signs of the organisers compromising their ethos. A site comprising of 4 stages all within walking distance of each other, yet without stage sound bleeding into one another.

I’ll start by mentioning a few things about the festival in general. Its very well organised. The staggering of the performers start times along with the careful positioning of stages allows you to always see at least some of a band without having to rush stage to stage.

The main Arc stage is visually impressive looking like a younger cousin of the pyramid stage, with a canopy to protect festival goers from those freak but almost expected summer showers.

The other 3 stages (Yohkai,Bixler and PX3) are set up in huge enclosed circus style tents again offering both protection from the unpredicable British weather and also adds to the stage ambiance and lighting even during the day.

So on to the music.With ATG mainly comprised of Post Rock,Math Rock and Heavy Metal, I have chosen to focus on the bands that really stood out and grabbed the festival goers attention. I have chosen to do this to give a more wider view of the musical talent on offer at ATG.

This is really the only UK festival that caters for the more ambient Post Rock. Lets start by discussing some of the stunning Post Rock bands that were performing this year. First on the list is God Is An Astronaut. Although in Pure Post Rock style 15min tracks are a given, the band made the right decision not to linger too long on the ever growing intro and work a stage friendly edit which still had the same great build up, but by doing this allowed them to fit in a few extra tracks. The highlight was the popular Suicide By Star which was a huge hit with the swaying crowd. Seeing them live, they didn’t lose a thing, expertly played and as intense as ever. The only down fall from this set was that their set time. At 7.40pm, it was still light outside, so unfortunately the stage lighting didn’t have the dynamic effect it deserved. Strong winds took most of the ambiance out of the smoke that was provided from smoke machines as it ended up just blowing straight off the stage. God Is An Astronaut don’t visit the UK often,so if you are lucky enough to get a chance to see them don’t hesitate, you wont be disappointed. 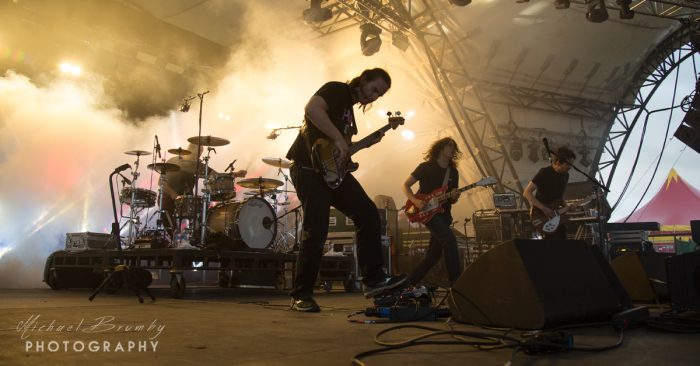 Now as far as Post Rock bands go, you don’t get much bigger than Explosions In The Sky. Cinematic soundscapes will captivate any audience member for the whole 1hr and 15 minute set. I was lucky to see Explosions In The Sky early in 2016. For the review please click here. Now I will draw your attention to some of the more less known Post Rock bands from this years festival.

Next up are Gilmore Trail, a 4 piece band from Sheffield. An easy listening band with a great ambiance presence who managed to attract a huge crowd at 11.35am,which is impressive at a festival. This is Post Rock at its finest. Each song is in no rush,they develop slowly and really build their layers beautifully. With film inspiration and natural elements, watching this set really is a great way to start your day. If you listen to or just dabble in Post Rock music Gilmore Trail are up there with Explosions, Mono and God Is An Astronaut. 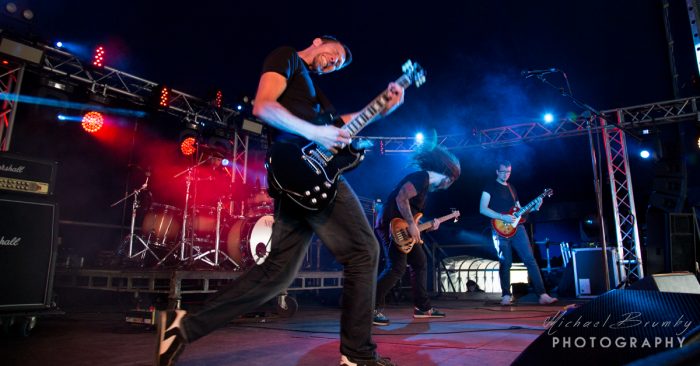 Fall Of Messiah’s distorted hammering guitar work contends with most Post Rock bands. Including beautiful spells of classic Post Rock elements, yet their strong drummer increases intensity to bring to whole set to a more heavier style. This accompanied with the bass, then takes the whole band to the slightly heavier end of Post Rock. 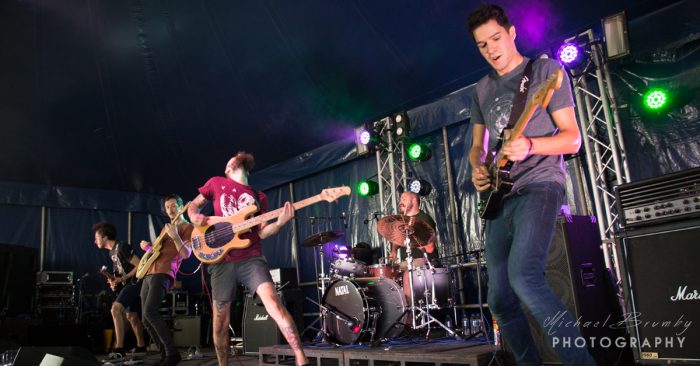 Now for some Math Rock.

Alpha Male Tea Party is a 3 piece instrumental band from Liverpool. I guess Aggressive Math Rock would be an accurate description for this band, however you really need to take a moment and give these guys a chance, then you will realise defining them into a individual category is somewhat pointless as they really have carved out their own style. A favourite at ATG, this 3 piece manage to get the crowd going every time. It’s not hard to see why they are soo loved by the ATG community, they have the energy and the stage presence to keep the audience interested not to mention their insane musical ability. Tom Peters guitar work is incredibly present and clean. They have a great mix of heavy and iconic riffs with some great technical mathy lulls. With support from Ben Griffiths (Bass) and Greg Chapman (Drums) Alpha Male Tea Party deliver a technically clean yet, complex set with a furiously heavy backing. 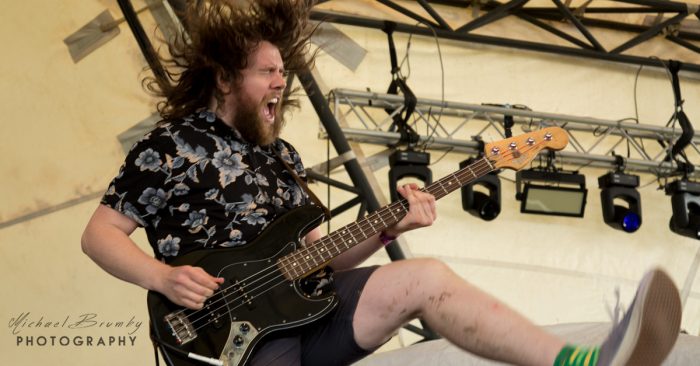 Hikes is a Math Rock band but with lulls of bliss between the scatty Math Rock flashes. Energetic and powerful, Hikes manages to take the technicality of Math Rock and infuses the essence of nature. Commanding on lead vocals and guitar, Nathan Wilkins provides Hikes with the edge that makes them soo much more than your standard Math Rock band. With Hikes touring internationally it will be interesting to see the development of this band in the next few years. 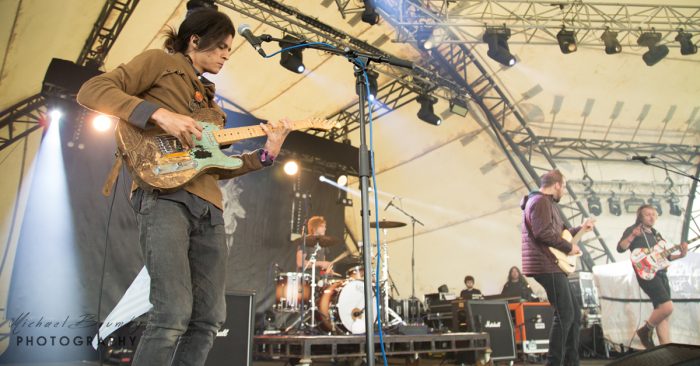 Now down to the heavier side of ATG

ATG has a dark,heavy side and it’s something that followers of this festival have grown to expect. Hemelbestormer, Heck and Bossk certainly represented the heavier side of ATG this year.

Lets start with Heck. The pit area was full of photographers eagerly awaiting the infamous Heck (formally Baby Godzilla). Now this was a hectic shoot, jammed into the pit alongside 12 other photographers. As in true nature, the stage just wasn’t enough! If they weren’t rocking out on top of stacks of Amps, they were floating above the crowd, instruments and all. Pure energy and heavy rifts, this was the most lively stage I saw by far. 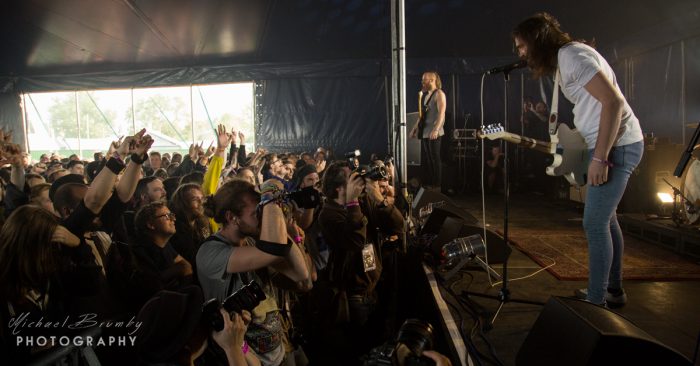 Bossk Ambient with a touch of metal. For those who like the Metal bands. One part metal one part ambiance. Bossk are the band that do that. Heavy yes, beautiful yes. 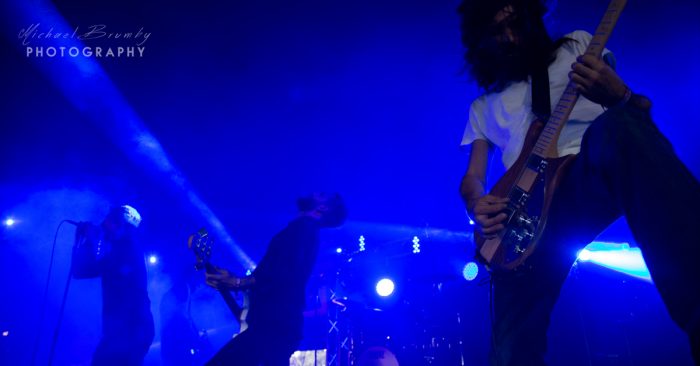 Hemelbestormer a mix of ambient with a black metal style, with heavy rifts and building up dread through their set. To add to the sense of metal they had zero lighting on stage and plumes of smoke almost obscuring the stage, to finish off all dressed head to toe in black. Despite the heavy backing drone, there were lulls of more ambient sounds, led more by pleasing guitar rifts. This surrounded by the heavier style, it was like rays of sunlight piercing a storm cloud, this band defiantly took the audience on a journey of dark and light. 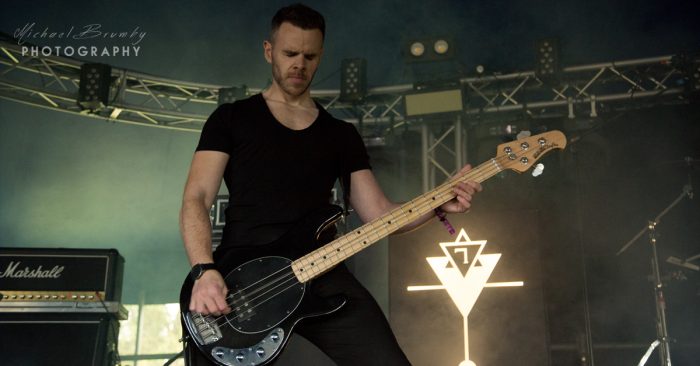 The next two bands I couldn’t really place into a certain category and just highlighted how diverse ATG really are when booking acts.

Nordic Giants are like the black sheep brothers of Public Service Broadcasting. These two have a whole different vibe going on dressed in masks and clad in feathers. I was excited to get the camera out and start snapping away until I realised that there was virtually no light on stage apart from the occasional flash of strobe every 5 minutes, a real challenge and a lot of patience needed to photograph. Most other photographers had given up after seeing the set up. However, they play to a set of short films and animations which were incredibly compelling and really pushed out from the dark stage. Mainly abstract work showing some of which was on par with something out of a Bjork video. It seemed such a shame that they had put in so much effort into their outfit choices, but yet the stage was mostly consumed by darkness. Emotive and visually interesting Nordic Giants are defiantly a unique performance worth watching. 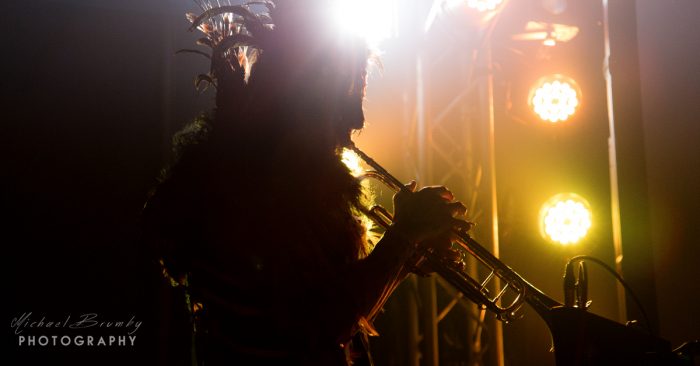 Worriedaboutsatan at first I assumed the genre to be heavy due to the satanic reference however, once I witnessed the set I got an understanding of the name. This was very much contrasting heaven and hell. One of the most amazingly constructed pieces of music with only two people on stage however, they commanded such musical control layering upon layering with their desk of peddles. Think Underworld, 65 Days Of Static and a splash of Aphex Twin. These guys have dug out a very unique place in the ambient electronic world. 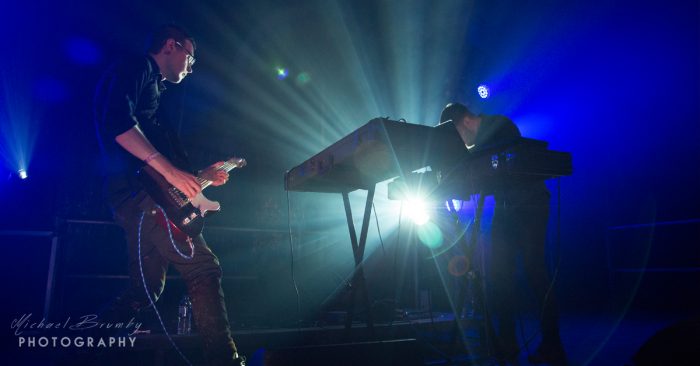 Other bands playing this years ATG that are worth checking out are:

Though Forms, Tall Ships, Tricot, Gallops. And Lost in Kiev

ATG festival has a wide range of bands from loads of sub categories of music. It really is the only place to see some of the most interesting, technical and emotive bands that are active in today’s music scene.

Words And Photographs by Michael Brumby: You can follow Michael on Facebook @michaelbrumbyphotography or you can see more photos by Michael Here