Home Music FROM THE ARCHIVES : Ministry interview from 1990 by John Robb 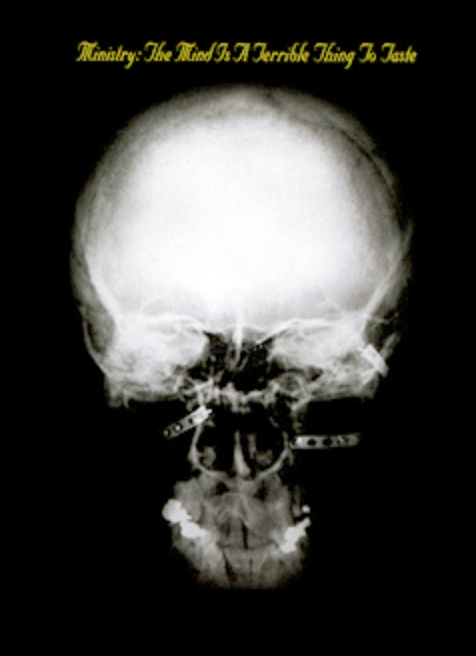 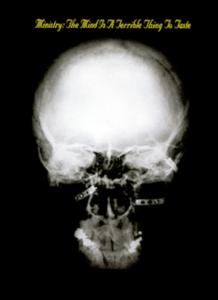 This summer legendary American industrial rock band Ministry are back over tour. Way back in 1990 LTW boss and Membranes frontman John Robb was flown out to Chicago to interview the band in the middle of their maddest phase. He somehow survived a wild weekend in the madness of Waxtrax and the wild world of the time to bring back this report…

PERHAPS THE core dude to all things Waxtrax is the mad fucker, retro byker figure from hell of Alain Jourgensen who is now a long way away from Ministry’s New Order-styled early ’80s electro groove. A time when he was fully kitted out as a clean-shaven noo romantic. The years have ridden roughshod over his features and his music which have both become heavier, dirtier and far more thrilling.

Currently armed with a gnarled beard, permanent shades, a six notches above normality chemical grin and a cranked-up vocal scheme, Jourgensen spends most of his life in the studio or road hogging with Ministry.

The early Ministry was the mainstay of the Chicago/Waxtrax noise, a calamitous wall of sound that has since spun off into several Jourgensen-powered projects (most notably Revolting Cocks), while the mastership itself has hitched a ride on Arista Records.

A legendary method producer (rumour has it that for the dark satanic feel, Jourgensen thinks nothing of painting the studio black and lighting the candles), this dude is into getting all necrophilic with the muzak corpse that he’s currently diggin’.

“It depends on how close the friendship with the band is, we do very few bands from just a musical perspective. Lots of the people we produce we’ve known for a long time. We work just like Kirk and Spock, and just hit the green button and see what happens.”

It’s been suggested that GWAR paid the noise fiend a gramme of coke and a crate of Bud a day for his Tar Trek routine – not that we’re interested in this scurrilous gossip.

“My God, how disgusting!” sneers Jourgensen. “We have so much energy and ideas we can do what we like.”

*
LIVE, MINISTRY are becoming a carnage melee and on recent tours there’s been a huge metal fence between the group and their baying-for-blood audience.

Now a full-time confrontational maniac, the Jourgensen party line is lewd, rude and an all-out blitz on the senses.

“There’s so much scum in this life that you don’t want to deal with. We don’t try to give an answer with our music, we try to be the catalyst, try to get people to think for themselves. Get people to throw bricks and the like.

Obviously, this man has never been left in charge of a guest list. But what of you, Al, what’s your place in this mad muthafucka scheme?

“We’re the party crashers. We get past the door, throw punches, pinch some ass, eat all the food. We’re the uninvited but we break in anyway. We’re getting tired of this never-ending cocktail party.

“I mean what is r’n’r all about? It’s become too homogenized, it’s shit – over here (in Chicago) you get to grow up with classic rock on the goddamn radio all the time. It’s just not adventurous anymore.”

Jourgensen’s spewing enfant terrible mode and skull-crushing muzak stomp has wound up the bleating moral minority assholes. But beneath the leather-bound hide lives a real human being – Christ, he’s even got kids, a family man! – who gets nervous before he stomps on to the splintering stage.

“I have to get drunk before I play,” he admits. “The fence was great. It was cool not to be like a goldfish anymore, we could watch the audience – that was our entertainment.

“We’re pussycats in real life. We’re not tough, we’re survivalists. When the bomb goes off and germ warfare starts, me and ten other people will survive – ten Texans. Ha! Ha! Ha! They’re so drugged. There’s too many drugs in the atmosphere for the germs to procreate. I love Texas.” He spits, before stumbling off into the hazy Chicago morning, his byker boots squelching on the dawn pavements, his cranked cranium squelching under his straw hat.

A mighty figure who oozes a bruising confidence, like heavy mental music, has arrived.